SEOUL (REUTERS) – The United States was very encouraged by a recent meeting between the leaders of South Korea and Japan, a top US... 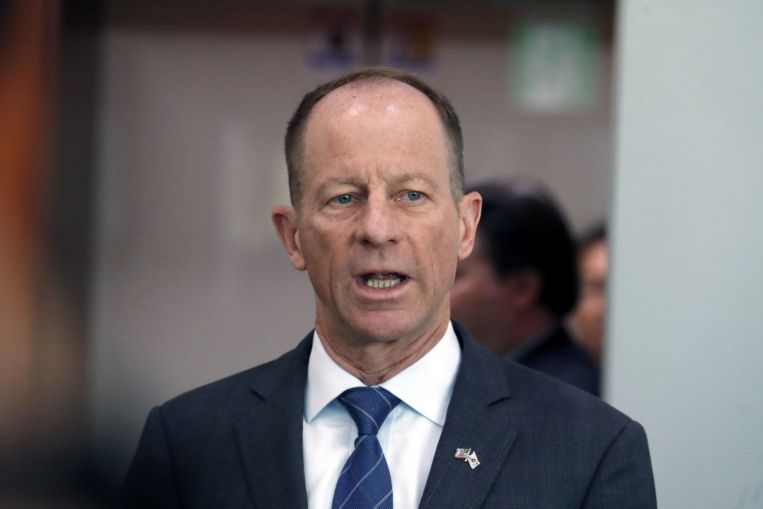 SEOUL (REUTERS) – The United States was very encouraged by a recent meeting between the leaders of South Korea and Japan, a top US diplomat said on Wednesday (Nov 6), as strained ties threatened to undercut three-way security cooperation on North Korea.

US Assistant Secretary of State David Stilwell arrived in Seoul on Tuesday as relations between South Korea and Japan, important US allies, have plunged to their worst state in decades after South Korea’s top court ordered Japanese firms to compensate wartime forced labourers last year.

But South Korean President Moon Jae-in and Japanese Prime Minister Shinzo Abe had an 11-minute conversation on the sidelines of an international conference in Bangkok on Monday, also attended by US officials, the first time they had met in more than a year.

“Very encouraged while we were there to note that President Moon and Prime minister Abe had the opportunity to talk,”Mr Stilwell told reporters after meetings with South Korean officials. “That’s an encouraging sign as we watch the relationship improve.”

His visit came as an intelligence-sharing pact between South Korea and Japan is set to expire this month.

South Korea decided not to renew the agreement, known as GSOMIA, amid the spiralling political and trade row, a decision that the United States has criticised.

“The US side said those efforts are encouraging and agreed that such efforts should continue going forward,” the ministry said in a statement.

Both sides were also expected to discuss ways to reinvigorate stalled denuclearisation talks between the United States and North Korea.

Envoys from the United States and North Korea met in Stockholm last month for the first time since US President Donald Trump and North Korean leader Kim Jong Un agreed in June to reopen negotiations after a failed summit in Vietnam in February.

But the meeting in Sweden broke down, with the North’s envoy saying the US side failed to show flexibility.

They could hold another round of talks as soon as mid-November as Mr Kim set sights on a summit with Mr Trump in December, a South Korean lawmaker said on Monday after being briefed by a spy agency.

As Mr Stilwell’s meetings were under way, a group of activists rallied in front of the ministry building, deriding what they called a US attempt to “squeeze” South Korea over the GSOMIA decision and defence cost-sharing talks.

Mr James DeHart, the US representative in the negotiations, designed to determine how costs are divided for the upkeep of 28,500 U.S. troops in South Korea, was also in Seoul.

A survey by the government-affiliated Korea Institute for National Unification released on Wednesday showed that some 96 per cent of South Koreans said South Korea should not pay more for the US military presence, while 72 per cent supported the decision to end the GSOMIA.

The lack of progress in the nuclear talks has also cast a pall over inter-Korean cooperation, stalled after a flurry of summits last year.

The South’s Unification Ministry, which is in charge of inter-Korean ties, said it had proposed sending a delegation of officials from the government and companies that built the facilities for an inspection, after the North rejected its offer of talks.