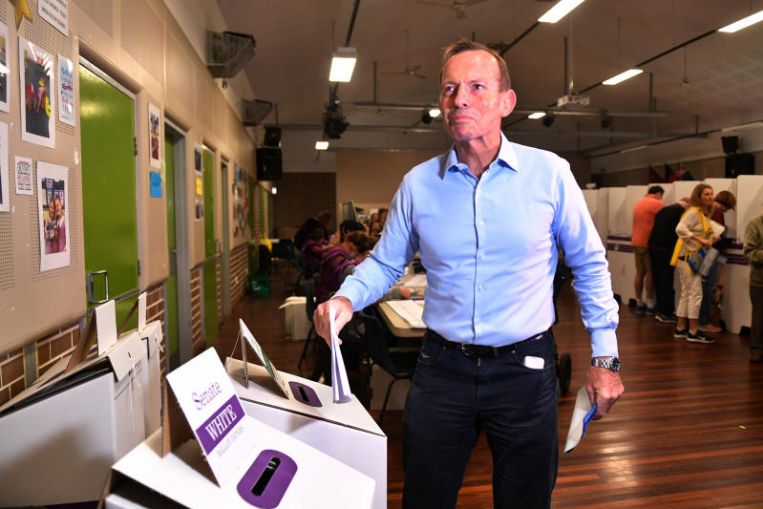 SYDNEY (AFP) – Former Australian prime minister Tony Abbott, infamous for once calling the science behind climate change “crap”, has become the first big scalp in the country’s elections on Saturday (May 18).

Abbott, who was prime minister from 2013 to 2015, was one of the most vocal climate sceptics in parliament and had held his seat of Warringah in Sydney’s northern suburbs for a quarter of a century.

But amid a groundswell of activism on climate change among his affluent beachside electorate and a strong challenge from independent candidate and former Olympian Zali Steggall, Abbott was unable to hold on.

While the national election remained too close to call – with the conservative coalition government of Prime Minister Scott Morrison doing better than expected – Abbott admitted his defeat, less than three hours after polls closed.

“I can’t say that it doesn’t hurt to lose,” he told supporters, but added, “I’d rather be a loser than a quitter”.

The contest in Warringah had become so heated that an Abbott volunteer was stabbed in the stomach with a corkscrew late Friday while putting up campaign posters, with the Liberal candidate saying it reflected the ugliness of the election campaign.

Steggall said earlier on Saturday she believed she could win and was running in the election to give locals a choice.

“After 25 years there are a lot of people that are ready for different representation and a different style of politics,” she told reporters after voting.

During voting on Saturday near Abbott’s surf club, the site of one of the polling stations, anti-fossil fuel campaigners set up a “democracy sausage” stand – a election day tradition – with signs “fry sausages not the climate” and “let’s snag some climate action”.

Locals emerging from the ocean with their surfboards beside the station said they were voting for a change in direction.

At another polling station, Abbott was surrounded and questioned by students who skipped school early this year to protest against government inaction on climate change.

Australia is one of the world’s worst per-capita greenhouse gas polluters, due to heavy use of coal-fired power and a relatively small population of 25 million.