Tom Cruise was a surprise guest at Comic-Con where he unveiled a trailer for the sequel to his movie Top Gun, released more than... 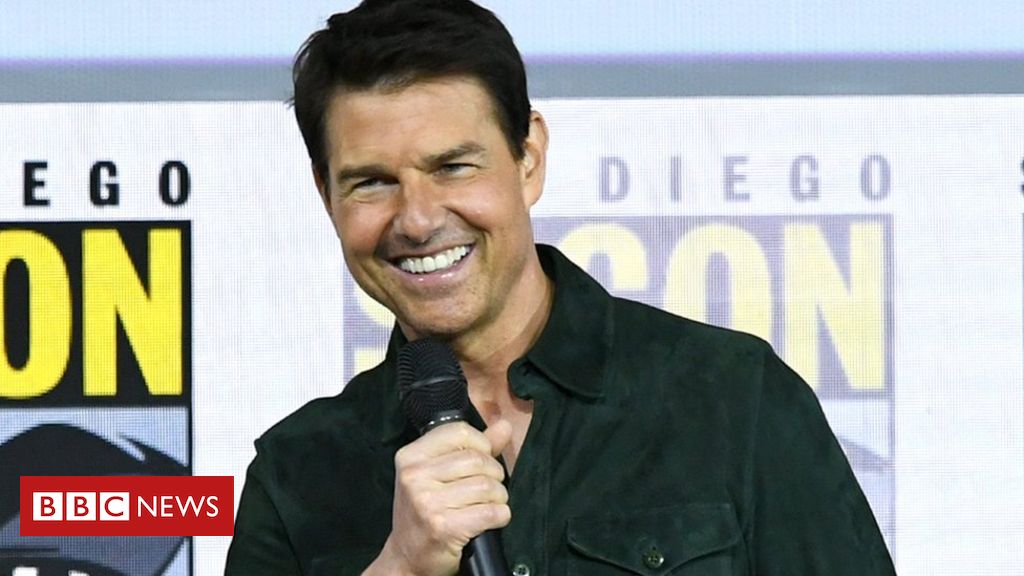 Tom Cruise was a surprise guest at Comic-Con where he unveiled a trailer for the sequel to his movie Top Gun, released more than 30 years ago.

Top Gun: Maverick sees him revisit brilliant but reckless pilot Pete “Maverick” Mitchell, still flying but unable to to let go of his past.

The trailer shows Cruise apparently pulling off some incredible aerial moves on board a US Navy jetfighter.

“Everything you see in this film is for real,” he told the San Diego audience.

“We’re working with the Navy, all of the flying you see in this picture is real, I really wanted to give you all an experience of what it is to be inside that aircraft.

“It’s a love letter to aviation.”

Released in 1986, Top Gun was apparently inspired by an article titled Top Guns published in a magazine three years earlier.

The film, directed by the late Tony Scott (Ridley Scott’s brother) was widely praised for its cinematic achievements in capturing breathless action sequences. It won an Academy Award for best original song for Take My Breath Away by the band Berlin.

It made a star of Cruise and also featured Kelly McGillis, Meg Ryan, ER’s Anthony Edwards and Val Kilmer – who is also back for the sequel but is not seen in the first trailer.

Its critics said the film served as a glorified jingoistic recruitment tool for the US Navy but in 2015, the US Library of Congress selected the film for preservation in the National Film Registry.

“Thirty-four years ago I made a movie in San Diego,” Cruise told the Comic-Con audience following a panel to launch the latest film in the terminator franchise, starring Arnold Schwarzenegger and Linda Hamilton.

“Thirty-four years and you’ve been very patient with me and I felt it was my responsibility to finally really deliver for you.”

Elsewhere, the first full trailer for the BBC’s adaptation of Philip Pullman’s His Dark Materials was screened for fans.

Hamilton creator Lin-Manuel Miranda, who plays the aeronaut Lee Scoresby, was joined by his co-stars Dafne Keen, James McAvoy and Ruth Wilson for a panel and said he jumped at the chance to be in the series.

“I didn’t even know what the part was, I would have sharpened pencils for this,” he said.

“I’m a huge fan of the books. When my wife and I started dating we read these books together…they’re in a really special place in my heart.”

The series will be shown on the BBC and on HBO later this year.

A film version made in 2009, starring Daniel Craig and Nicole Kidman, flopped at the box office.

“TV has become the place where you can really explore story and drama, as well as the big fantasy, said Wilson, who plays the mysterious Mrs Coulter.

“(TV) is not the poorer sister anymore. It’s actually where you can spend more time in storytelling and they have the money now to create the scale on which film used to be on.”

Shortly before Tom Cruise crashed the Terminator party, the stars of the next film in the Terminator franchise were talking to fans about returning to their iconic roles in the new film directed by Tim Miller.

“I gave it careful consideration because I felt the first two were very intact,” admitted Hamilton whose last appearance was in 1992’s Terminator 2: Judgement Day. “And you kind of want to retire a champion.

“I was intrigued by the passage of time, the character is the same but time changes everything.”

Although the film’s producer James Cameron wasn’t there in person because he’s filming the new Avatar films, he appeared via video link.

He said he agreed to another Terminator film because Hamilton and Schwarzenegger were on board.

The film is considered by the cast and filmmakers as a sequel to the first two films – rather than the three which followed – in which we see a new advanced Terminator chasing down another young target.

It’s out in November.

Since Marvel Studios wrapped the latest phase of the MCU up with Avengers Endgame (and Spider-Man Homecoming) this year, there is huge anticipation for what fans will get next.

While we expect some big announcements from the Marvel Cinematic Universe in the upcoming days, we have already been given a look at Marvel’s Avengers video game.

One of the biggest surprises from it was a clue to the appearance of Kamala Khan, whose alter-ego is Muslim superhero Ms Marvel.

During a demo for the game, a young girl is seen calling for her mother wearing a Captain Marvel t-shirt, before being affected by Terrigen Mist, the fictional substance which gives her shape-shifting powers.

The force is strong at San Diego Comic Con, despite the fact that there are no big Star Wars panels this year.

Fans have been treated to a special exhibit of nine storm trooper armour designs from across the Star Wars saga. Plus we got to see a storm trooper makeover with the new Sith trooper collectable in bright red.

It’s the first look at the next evolution in Imperial/First Order soldiers from the upcoming film Star Wars: The Rise of Skywalker.