BOSTON (AP) — The defending World Series champion Boston Red Sox hadn’t had a lopsided victory yet this season. Their win over Detroit on... 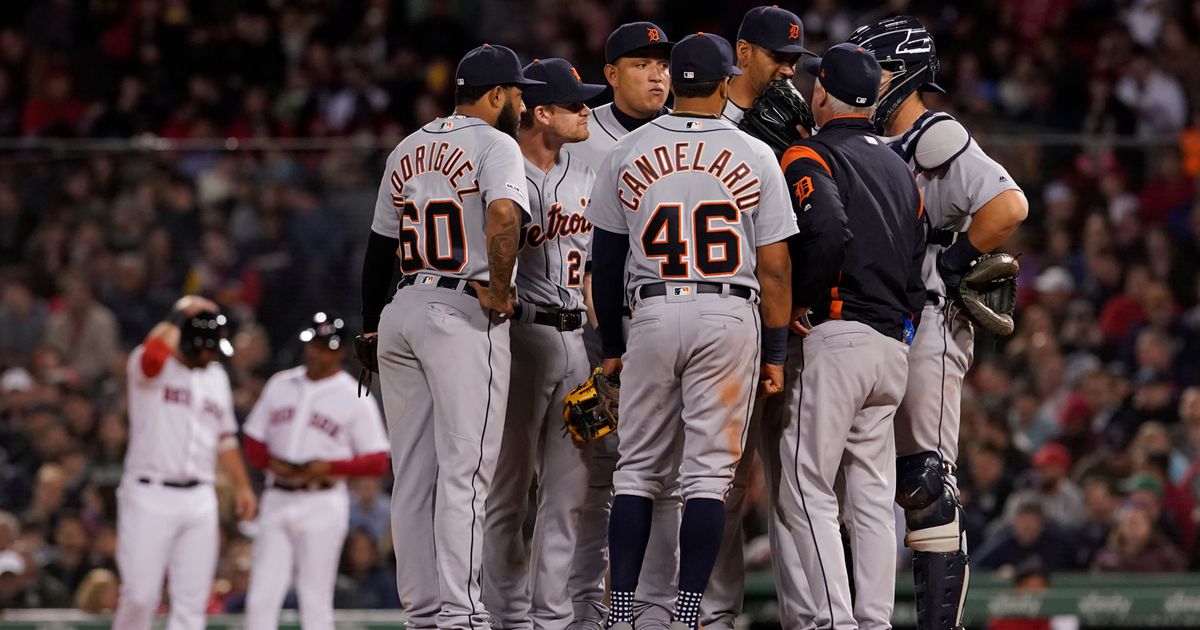 BOSTON (AP) — The defending World Series champion Boston Red Sox hadn’t had a lopsided victory yet this season. Their win over Detroit on Wednesday night gave them a chance to relax.

J.D. Martinez had three hits, Eduardo Rodriguez pitched six strong innings and the Red Sox rebounded from a doubleheader sweep by Detroit with a seven-run outburst in the eighth inning in an 11-4 win over the Tigers.

“We were kind of joking about it that this is the first night we’ve had like this,” Martinez said. “Last year, it felt like we had a lot of them.”

Martinez hit two singles, a double and drove in a run, and Christian Vazquez had two RBI singles.

“It felt great,” reigning AL MVP Mookie Betts said of the lopsided victory. “But getting a win is the most important thing.”

Nicholas Castellanos had an RBI single for the Tigers, a day after their first doubleheader sweep in Boston since 1965.

“As I told those guys out there, ‘Listen, we’ve won two out of three in Boston and have a chance to win three out of four,’” Tigers manager Ron Gardenhire said.

Rodriguez (2-2) gave up a run on two hits, striking out seven and walking three. He improved to 12-0 since the start of 2017 when getting at least three runs of support.

He took a no-hitter into the fifth inning before Gordon Beckham lined a one-out single to left field. Rodriguez closed the inning by striking out the next two batters.

The Red Sox used two hit-and-run at-bats in the second to build a 2-0 lead. Running on the pitch, Martinez reached second easily on a bouncer to short by Xander Bogaerts. Rafael Devers followed with an RBI single.

Vazquez’s first RBI single bounced into right through the vacated hole when second baseman Beckham went to cover as Jackie Bradley Jr. broke for second with runners on the corners.

Betts hit an RBI double off the Green Monster, and Martinez added a run-scoring single to make it 4-0.

Tigers: INF Josh Harrison had the night off after playing both games of Tuesday’s DH. “It wasn’t tough at all,” manager Ron Gardenhire said of sitting him. “You should have seen him walk in here. I said, `See you in the training room.’ He’s a little sore. I told him (on Tuesday) my thought process is probably a day and he said that’s probably the right thing.”

Red Sox; 2B Dustin Pedroia (IL, left knee irritation) hit on the field and took grounders with INF Eduardo Nunez (IL, mid-back strain). “He looked OK,” manager Alex Cora said of Pedroia. “We’ll talk about it, to see what’s the next step.” . Cora said Nunez “was out there swinging with velocity. He looks good.” . Utility player Brock Holt (scratched right cornea) could be going on a rehab assignment this weekend.

“It was just one of those long innings that happen every now and then,” Detroit catcher Grayson Greiner said. “Hopefully it doesn’t happen for a while.”

Boston relievers Brandon Workman and Matt Barnes each had three strikeouts in their one inning of work, with Barnes getting Ronny Rodriguez to end the eighth with the bases loaded.

Martinez hit a groundball down the left-field line that got jammed in a small opening of a garage door along a side wall in foul territory. It was ruled a ground-rule double even though he reached second easily.

The door is used to move batting cages, screens and equipment by the ground’s crew onto the field.

“It was weird,” Martinez said.

Detroit’s Double-A affiliate, the Erie SeaWolves, had a combined no-hitter Wednesday in a 4-0 win over the Bowie Baysox.

The SeaWolves’ Alex Faedo and Drew Carlton combined to shut down the Baysox. Faedo retired the first 11 batters he faced and struck out five and walked one in seven innings. Carlton stuck out two and walked one in two innings.

It was the third no-hitter in franchise history, with the previous two thrown by Thad Weber on August 22, 2009, and Elvin Hernandez in 1995.