The protests are calling for an overhaul of the political system At least three protesters have been killed in separate clashes with... 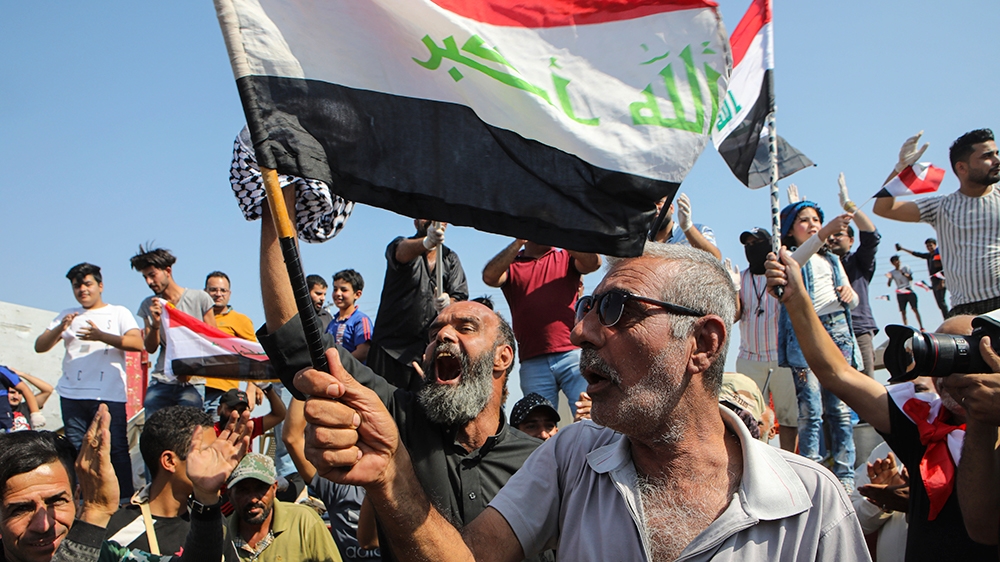 At least three protesters have been killed in separate clashes with security forces in southern Iraq, according to officials, as demonstrators in the capital continued disrupting daily life in a bid to apply pressure on the government to step down.

The deaths on Monday were in addition to at least five protesters killed in Baghdad as security forces used live rounds, in the latest bout of bloodshed amid weeks-long demonstrations demanding an overhaul of Iraq’s political system.

Security and medical officials said on Tuesday a protester was killed and dozens were wounded the night before when security forces opened fire on demonstrators who have for days blocked the entrance of the main Gulf port of Umm Qasr, south of the oil city of Basra.

The officials, who spoke to news agencies on condition of anonymity because they were not authorised to brief reporters, said security forces in Umm Qasr were firing live ammunition and tear gas, and that protesters had seized an armoured vehicle.

Basra security officials imposed a curfew around 10pm (07:00 GMT) on Monday night, in an initial attempt to disperse the sit-in, saying they would use force to disperse the crowd if necessary.

Separately, two people were killed and 23 wounded in clashes in Shatra, 45km (28 miles) north of the southern city of Nasiriyah, according to the Iraqi High Commission for Human Rights, a semi-official agency.

Hospital sources said both protesters from Shatra died from bullet wounds to the head.

The protesters had tried to attack the house of a senior government official, security sources said.

“Appalled by continued bloodshed in Iraq,” she wrote in a Twitter post.. “Violence only begets violence, peaceful demonstrators must be protected. It is high time for national dialogue.”

More than 260 protesters have been killed since the anti-establishment demonstrations erupted in early October in Baghad and several southern cities.

The mass demonstrations, which broke out again late last month after a three-week hiatus, have been met with a harsh response by security forces, who have used tear gas, rubber bullets and live ammunition against those protesting. Last month, a government-appointed inquiry tasked with investigating the killings during the first wave of protests found that security forces had used excessive force.

The demonstrations are rooted in long-standing grievances over poor governance, official corruption and lack of economic opportunity, but have since expanded into demands for sweeping changes and an overhaul of the country’s political system, which was established after the US-led invasion in 2003.

The protesters say their leaders have enriched themselves while letting the economy and infrastructure crumble.

They complain of high unemployment and poor public services. Despite Iraq having the world’s fourth largest proven oil reserves, Baghdad and other cities still suffer frequent power cuts and the tap water in many areas is undrinkable.

Last week, President Barham Salih said Prime Minister Adel Abdul Mahdi was willing to resign once political leaders agreed on a replacement. He also called for a new election law and said he would approve early parliamentary polls once it was enacted.

The announcements, however, have failed to appease determined, who appear determined to keep pressure on the government.

In Baghdad, protesters blocked dozens of roads as schools and courts remained closed amid a strike by teachers and lawyers, Al Jazeera’s Natasha Ghoneim, reporting from Baghdad, said on Tuesday.

“What we are seeing is an escalation by protesters who say their demands have not been met,” she added.

“Although their movement is leaderless, on Monday evening protesters issued demands from Tahrir Square: that the government needs to step down immediately; Parliament must be dissolved; elections need to be scheduled and an election committee needs to be selected with credentials and not party affiliation in mind.”

For his part, Abdul Mahdi on Sunday called for markets, factories, schools and universities to reopen, saying “it’s time for life to return to normal”.

He said in a statement that the threat to oil facilities and the closure of roads had cost the country “billions” of dollars and contributed to price increases that affect everyone.

On Monday, he held meetings with senior judicial and security officials at the Federal Police Headquarters to discuss ways to restore stability while preserving the right to protest and protecting private property, according to a government statement.