Hong Kong, China – Tens of thousands of people have marched through Hong Kong in an anti-government demonstration that descended into chaos, as protesters vandalised...

Hong Kong, China – Tens of thousands of people have marched through Hong Kong in an anti-government demonstration that descended into chaos, as protesters vandalised metro stations and mainland Chinese-owned businesses and police fired volleys of tear gas.

Following a week of relative calm, demonstrators took to the streets on Sunday despite authorities banning the march, setting up roadblocks and throwing petrol bombs. Many protesters wore masks in defiance of a recent ban on face coverings at public gatherings.

The demonstrators said they would press on with their demands despite the potential resolution of a murder case linked to a controversial extradition bill that would have allowed suspects to be extradited to Beijing.

On Saturday, Hong Kong’s beleaguered Chief Executive Carrie Lam expressed relief at the news that Chan Tong-kai, the local man wanted in Taiwan for the suspected murder of his pregnant girlfriend, had agreed to turn himself in to Taiwanese authorities when released from Hong Kong prison later this week on a separate charge.

Having proposed the bill to enable his extradition, only to withdraw it last month in the face of mass protests, Lam said she hopes protesters would see no reason to continue their campaign.

But the chaotic scenes of police and protesters facing off on some of the busiest streets in Kowloon suggest that the political turmoil – which has roiled the city into the fifth month – does not appear to be winding down.

“This lays bare Carrie Lam’s hypocrisy. All along she ignored suggestions that Chan could be persuaded to turn himself in,” Ching Cheong, a political commentator, told Al Jazeera.

“Instead, she insisted on pushing the extradition bill and knocking down the judiciary firewall between Hong Kong and mainland China.” 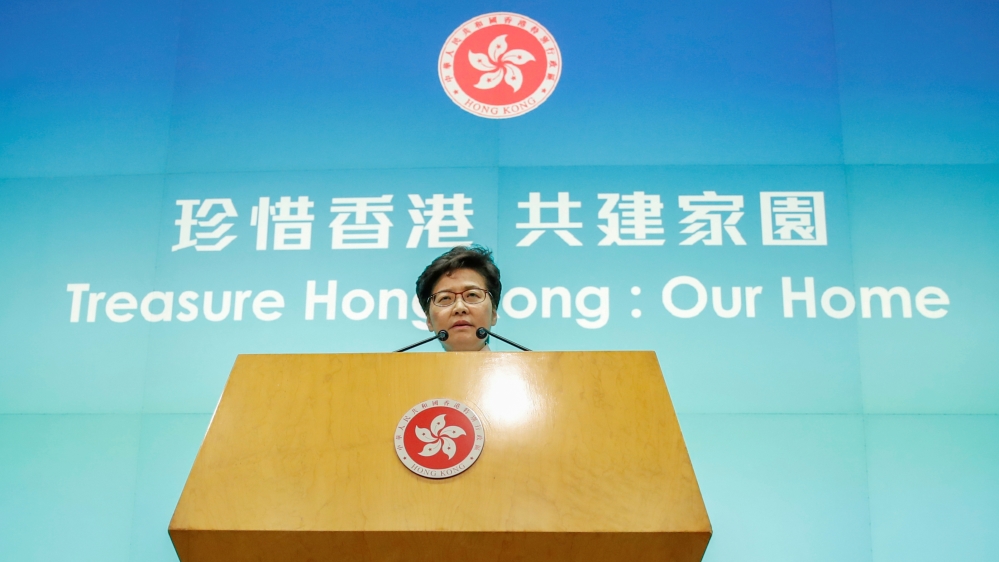 Lam has refused to heed calls from protesters for her to step down [File: Umit Bektas/Reuters]

A former British colony, Hong Kong was returned to Beijing’s control in 1997 shortly after extradition arrangements were hammered out in the Foreign Offenders Ordinance, which excludes mainland China because the “one country, two systems” framework has guaranteed Hong Kong people rights and freedoms largely absent there.

“We come out today for what we’ve been promised. If we stayed silent, the government would continue to walk all over us,” 50-year-old protester Giggs Wan said before the march.

Sunday’s march was banned by the police despite organisers’ pledge to keep it peaceful and non-violent. One of the organisers who has been on the forefront throughout the protests, Jimmy Sham, was attacked on Wednesday.

Since early June, Hong Kong has been engulfed in anti-government protests triggered by the now-suspended bill, which would also have allowed the extradition of accused individuals to mainland China for trial.

Public anger has been fuelled by officials’ refusal to address protesters’ demands, which include an independent inquiry into alleged police brutality in suppressing the protests, amnesty for the 500 people charged with offences linked to the protests and a retraction of police claims that protesters are guilty of rioting.

As the marchers streamed through several main streets, many raised their five fingers to signify their demands.

In an attempt to discourage protesters, Lam recently used an emergency law to ban face masks, which many protesters use to shield their identity from the omnipresent surveillance cameras, but many were not cowed.

“I’m scared to come out, given the police ban, but I feel it’s my civil right,” said Francis Chan, 24, through his surgical mask. “I’m adamant about our demands but it seems clear our chief executive won’t give an inch.” 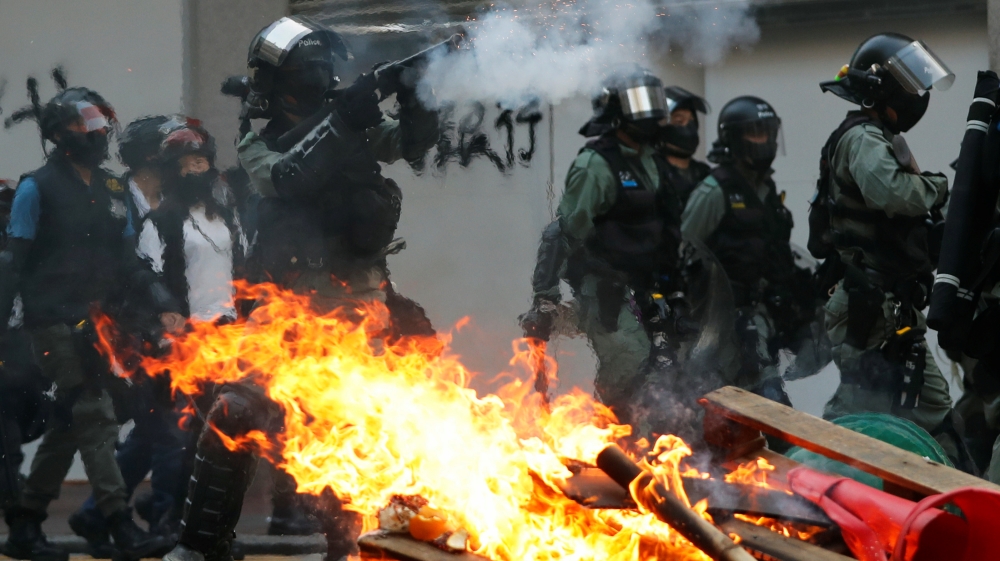 Police have repeatedly cracked down on the protest movement, deploying tear gas and water cannon against demonstrators [Tyrone Siu/Reuters]

Capitalising on the march’s gathering point being a popular tourist destination, protesters plastered illustrated flyers denouncing police conduct, while some protest flyers were worded in various foreign languages, such as Thai, Korean, German and French, informing tourists that “Hong Kong has a humanitarian crisis”.

In recent weeks, some United States politicians as well as the general manager of the Houston Rockets basketball team, have voiced support for Hong Kong protesters.

But, the commentator, said a solution to the wider crisis did not seem close.

“Now that we’ve seen many problems exposed … the distrust towards the government – all this has opened the pandora’s box,” said Ching. “Hong Kong will only see more rocky times ahead.”