Since Hong Kong’s handover to China in 1997, lawyers dressed in black have marched in silence six times Thousands of Hong... 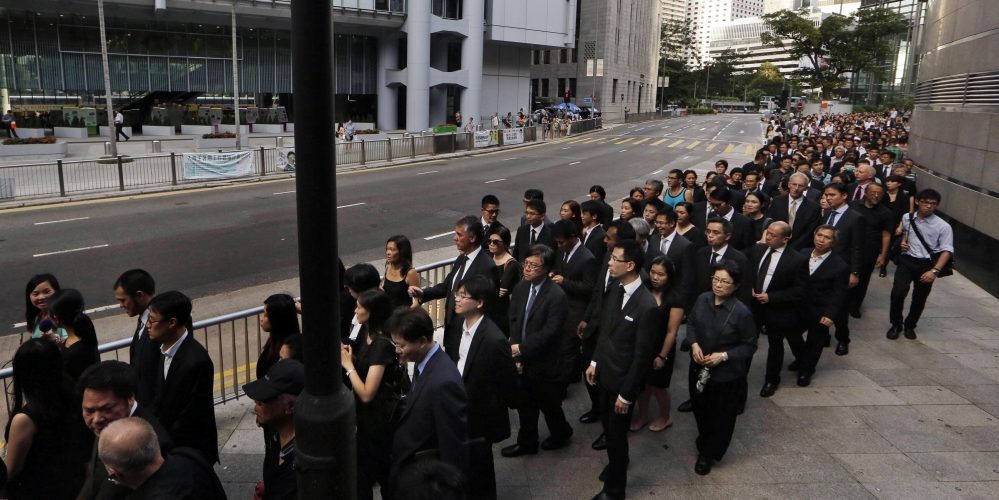 Since Hong Kong’s handover to China in 1997, lawyers dressed in black have marched in silence six times [File: Kin Cheung/AP]

Thousands of Hong Kong lawyers held a silent march on Wednesday to call on the government to safeguard its independence, as the head of China’s Hong Kong and Macau Affairs office warned that the city faces its biggest crisis since it returned from British rule in 1997.

Wearing black, the lawyers and their supporters gathered for the march from the Court of Final Appeal to Justice Place, just hours after police fired tear gas late on Tuesday to disperse protesters in Sham Shui Po, one of the city’s poorest districts.

“We are here to protect the rule of law,” Hong Kong legislator Martin Lee declared following the march.

“The rule of law means, most importantly, that we are all equal under the law,” Lee added, as he denounced the government for failing to go after people who carried out violent attacks against peaceful protesters.

Hong Kong’s lawyers fear the Department of Justice’s prosecutions of arrested protesters is taking on an increasingly political slant after 44 people were charged with rioting, an offence which carries a 10-year jail term.

Lawyers in a silent march to the justice secretary’s office to call for an independent commission of inquiry and the independence of government prosecutors.

Protests by the legal community are less uncommon these days under creeping authoritarianism in Hong Kong. pic.twitter.com/8vCyEkOI3T

Hong Kong’s mini-constitution, known as the Basic Law, states that the city’s Department of Justice “shall control criminal prosecutions, free from any interference”.

It is the sixth silent march by members of Hong Kong’s legal profession since the handover to Hong Kong 22 years ago.

Meanwhile, Zhang Xiaoming, one of the most senior Chinese officials overseeing Hong Kong affairs, made the comments during a meeting in the southern Chinese city of Shenzhen.

Zhang was holding a forum that included Hong Kong delegates to China’s parliament, the National People’s Congress and China’s main consultative body, the CPPCC, to discuss the political crisis in the territory.

Hong Kong has faced months of, sometimes violent, protests that began with opposition to a now-suspended extradition law, which would have allowed suspects to be tried in mainland courts controlled by the Communist Party.

But the protests have broadened into a backlash against the Hong Kong government, fuelled by many residents’ fears of eroding freedoms under the tightening control of China’s Communist Party leaders in Beijing.

Hong Kong was guaranteed freedoms not granted in mainland China, including an independent judiciary, under a “one country, two systems” formula, when Britain handed it back to China in 1997.

But many residents see the extradition bill as part of a relentless march towards mainland control.

Protesters are demanding a complete withdrawal of the bill, an independent inquiry into the crisis, an investigation into what they say is excessive use of force by police, and for Hong Kong’s leader Carrie Lam to step down.

In China’s sharpest rebuke yet of the protesters, the government on Tuesday warned them not to “play with fire”, saying they were pushing Hong Kong into a “dangerous abyss” and called on Hong Kong citizens to protect their homeland.