This is How David Beckham Celebrated his 44th Birthday

David Beckham kept things simple and low-key this year as he rang in his 44th birthday with a family meal.  The former footballer was...

David Beckham kept things simple and low-key this year as he rang in his 44th birthday with a family meal.

The former footballer was joined by his wife Victoria Beckham and their four children Brooklyn, 20, Romeo, 16, and Cruz, 14, and Harper, seven – as well as his parents, Sandra and David.

Victoria couldn’t resist littering her Instagram platform with fun snaps and clips from the celebrations, which also included a delicious birthday cake and kisses from sweet Harper.

In one clip a scrumptious looking chocolate cake was seen being presented to a delighted David before sweet Harper gave him a kiss on the cheek.

His family faintly sang him ‘Happy Birthday’ and clapped, cheered and encouraged him to blow out the candles.

Another series of snaps show the family posing for the camera as they mark the milestone.

David kicked off his birthday in style as he woke up to a homemade sausage sandwich breakfast on Thursday. 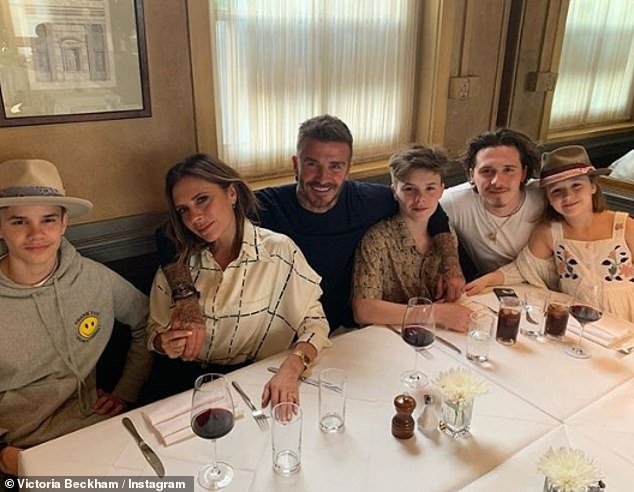 Despite boasting a reported net worth of £765 million, fashion designer Victoria gifted her husband £8 La Roche Posay deodorant, while the children treated their father to ‘cheeky cards’ for his special day.

Pulling out all the stops for the former footballer’s milestone, Harper presented her father with a homemade sandwich, which was placed on a plate with a pretty yellow flower.

The family’s extravagant abode was decked out in reflective silver balloons and a ‘Happy Birthday’ banner for the special occasion.

Moments later, doting wife Victoria shared a sweet tribute to her husband, alongside a flashback picture of the couple lovingly holding each other’s hands during dinner. 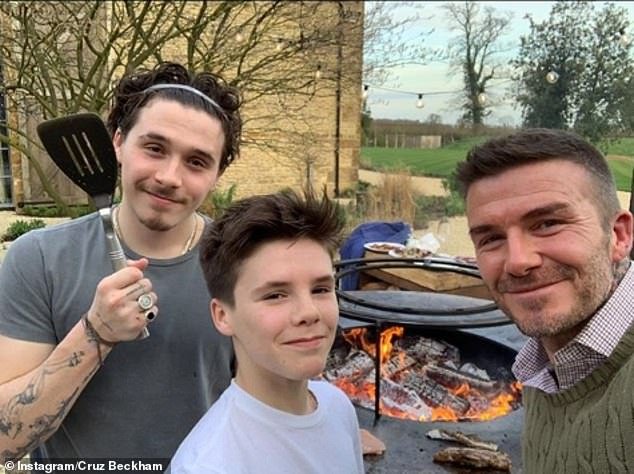 Further spreading the love was budding tennis player Romeo, who hailed his dad ‘amazing’, while his younger brother Cruz sweetly thanked David for his role as a father.

Instagram sensation Romeo penned: ‘Happy birthday dad I hope you have an amazing day ❤️ love you so much @davidbeckham.’

Aspiring singer Cruz said on his social media account: ‘Happy birthday dad have a amazing day thank you for all you have done for me i love you @davidbeckham ❤️.’

Romeo appeared to poke fun at David’s changing hairdo as he gifted the former sportsman with a plain white birthday card, emblazoned with the words: ‘DAD I GOT YOU THIS CARD BECAUSE IT MATCHES YOUR HAIR’, in grey font.

The Manchester United ace recently turned his formerly thinning locks into a salt and pepper quiff amid claims he had a hair transplant back in September last year. 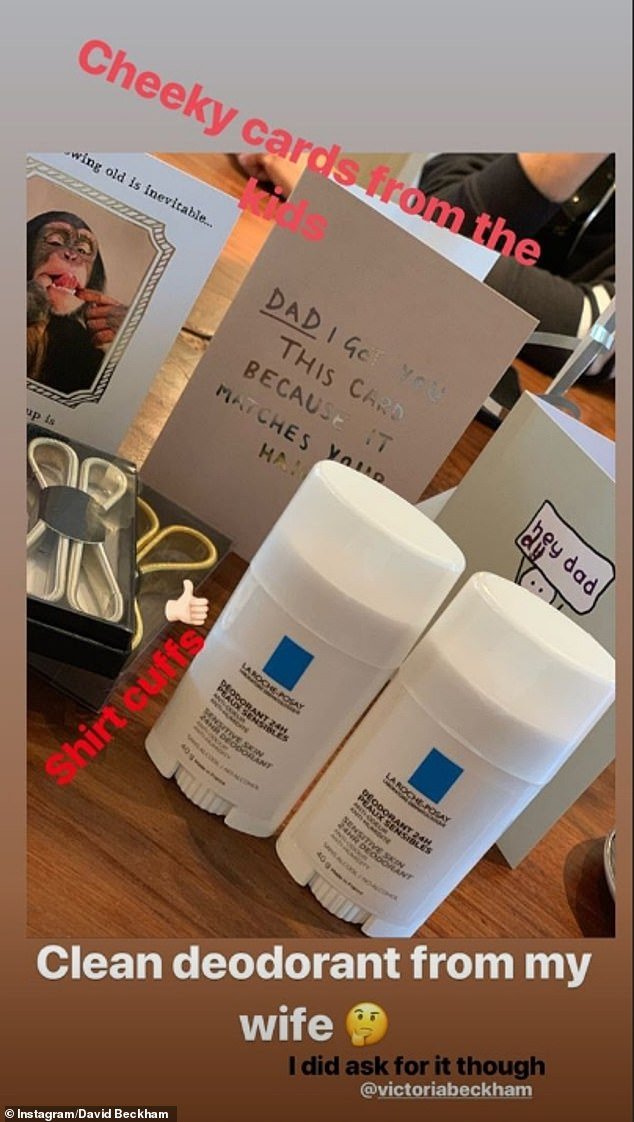 Cruz made a reference to David’s playful nature as he treated the UNICEF ambassador to a card which read: ‘Dad, growing old is inevitable… but growing up is optional’, finished off with an image of a monkey pulling a funny face.

David is no doubt appreciative of his wife and children’s sweet efforts, after holding back tears during his 44th birthday celebrations.

Last year, the retired footballer was unable to contain his shock when he saw the photographer surprisingly saunter up behind him at his celebratory meal.

The athlete sported a delightedly shocked reaction and was on the brink of breaking down in tears of happiness as his eldest embraced him from behind.

‘What are you doing here?’, David asked as he continued to hold him close – appearing to not believe the moment was real.

In a voice in the background, which appeared to be that of six-year-old Harper’s, it was stated: ‘I didn’t know Brooklyn was coming!’

David and Victoria are one of the power couples in the showbiz world as they edge nearer the 20-year milestone of marriage later this year.

They were married in a romantic ceremony at Luttrellstown Castle in Ireland in July 1999.

It was love at first sight for the footballer who set his heart on the singer after he laid eyes on Posh Spice in a catsuit in Spice Girls’ music video Say You’ll Be There.

Sparks flew between the pair when Victoria crossed paths with David at a Manchester United match in 1997, two years before they married.