The Samsung Galaxy S10e is the Galaxy phone for everyone

Story highlights Samsung’s Galaxy S10e is available for preorder now ahead of March 8 launch. It’s the most affordable Galaxy S10, starting at $749.... 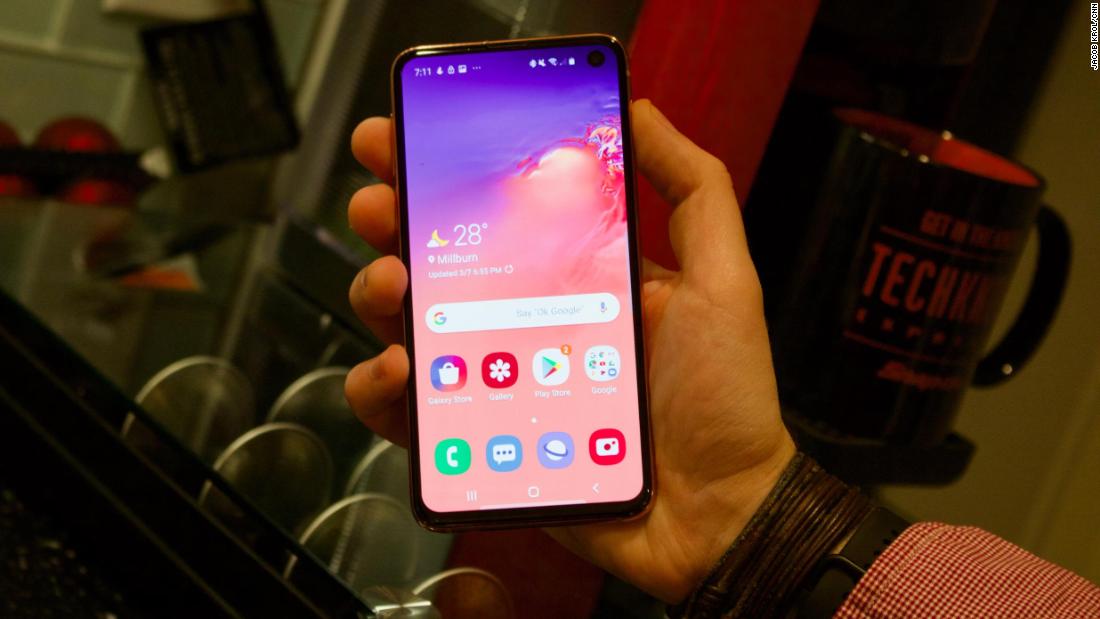 When Apple announced three new iPhones last September, I think everyone expected Samsung to come back with three new phones on the Galaxy S flagship line.

And Samsung did just that.

To celebrate 10 years of Galaxy S, the S10, S10+ and S10e were announced. All three certainly having flagship hardware with AMOLED displays and Qualcomm Snapdragon 855 processors. The Galaxy S10e ($749.99; samsung.com) is a bit different though. It’s more affordable and is a direct competitor with Apple’s iPhone XR ($749).

It’s the smallest of the three, but almost as feature packed. I’ve had several days to test it as my daily driver. More so than anything else, it feels like the Galaxy for everyone.

It’s kind of the perfect size

The S10e is smaller in stature and screen size than the monstrous Galaxy S10+. A 5.8-inch Full HD+ Flat Dynamic AMOLED display covers the entire front of the phone. Yep, it’s a 1080p display, something that you can’t say about the iPhone XR; Apple gave that a 720p display. Since the S10e has a flat display, you can clearly see the bezels going around it.

On that note, the S10 and S10+ both feature curved displays, and I think I like the flat one on the S10e is better. You don’t end up opening apps or edge features as frequently. Plus with watching videos, it just seems a bit more accurate not to have the top or bottom bend backward. While it isn’t as bright or vibrant as the larger models, the screen is excellent.

Samsung didn’t want to put a notch on the S10s, and the S10e is no different. It has an Infinity O display (a hole punch display) with a single laser cut lens in the top right-hand corner. Like a notch on the iPhone, you will get used to it after a few days, and the most noticeable impact is pushing the notification bar to the left. There’s a mode in settings where you can hide it, but it doesn’t get in the way. Plus when you’re taking a selfie, a white circle will glow around it to catch your eye.

This 5.8-inch display is still very vibrant, better than that on the iPhone XR, and color reproduction has been accurate. In the end, it’s still a Samsung AMOLED panel, albeit a flat one. Since blue light from smartphones has become a concern, Samsung has included a built-in blue light filter. It’s easily turned on or off in the notification pull down settings. You can get more minutes with the filtering levels in settings.

I quickly fell in love with the S10e because fits in my hand. It’s a perfect size and isn’t that much smaller than the 6.1-inch S10. You’ll still find the USB-C charging port and headphone jack on the bottom. A volume rocker and dedicated Bixby button live on the left side, and a power button is on the right. That power button doubles as an excellent fingerprint sensor.

It’s faster than the one on the S10 and S10+, but it’s not as cool. The S10e has a capacitive fingerprint sensor, a technology that’s nearly been perfected and offers quick scans. The S10 and S10+ have an in-display fingerprint sensor that performs pretty well. I also really like the ability to tap my thumb onto the fingerprint sensor and have the S10e turn on and unlock in under a second. You can even swipe down with your thumb on the sensor to pull down the notification bar.

The back of the device houses standard and wide angle cameras. It’s also where you’ll see your color choice. The S10e comes in Prism White, Prism Black, Prism Blue and Flamingo Pink. I’ve been testing the latter, and love the color.

While this is the most affordable and smallest of the S10s, it’s pretty much on par with the S10 and S10+. The only difference is the amount of RAM, which to be honest, hasn’t caused a noticeable difference in my time with the device. Here’s a breakdown on that:

Those are the two models, and both have expandable storage through a microSD card slot. Inside both is a Qualcomm Snapdragon 855 processor and software enhancements to improve performance. Even with just 6GBs of RAM, the S10e performs well. In everyday use that’s filled with emails, texting, calls, social media, plenty of photography and light gaming, I didn’t experience any hiccups.

The S10e can handle up 2.0Gbps LTE connection aka access to superfast speeds on a cellular network and handles Wi-Fi 6. That’s the latest standard for networking, and you’ll likely see that as a common theme for other smartphones arriving this year.

A 3,100mAh lithium-ion battery is inside. Samsung’s worked behind the scenes to know when it needs to kick the hardware into high gear. For example, if you’re gaming, it might speed up the CPU and tax the battery more. I easily got a full day of usage with routine tasks and features, but a game or two of “Fortnite” knocked it down a bit. The S10e supports fast charging via the included power brick and via wireless chargers that meet the standards for 2.0 speeds.

Like the S10 and S10+, you can wirelessly charge other devices on the back of the S10e. It’s a prolonged 4.5 amps experience but can come in handy for charging Galaxy Buds, a Galaxy Watch Active or another phone. I wouldn’t recommend the latter though as it’s pretty slow. As I said in my S10+ review, it’s kind of a gimmick and cool party trick, that does offer real-world utility.

Wide angle and ultra wide lenses are on the back

The other significant change is that the S10e has only two rear cameras, a 12-megapixel wide-angle lens with optical image stabilization and an 16-megapixel ultra-wide lens. You don’t get the 12-megapixel telephoto, aka, optical zoom lens that the S10 and S10+ have. It’s not a deal breaker, but to get closeups, you’ll need to use digital zoom or physically move toward the objects your shooting.

These two lenses perform well, and the addition of an ultra-wide lens is a welcome one. Even if it doesn’t have optical image stabilization, I found that similar to the S10 and S10+, these balance color well and capture a great detail. Samsung’s intelligent features still tend to overexpose a bit, but you’ll get solid photos with the S10e.

I don’t think you’ll be disappointed by the camera performance. There’s a chance your photos might be a little pixelated if you use digital zoom, but that comes with the type of lens. The best bet would be to move closer.

Like the S10, you have a single 10-megapixel lens on the front and selfies are on-point. Compared to the S10+, you’ll likely notice that portrait or bokeh shots might be as clear. You don’t have that second depth camera, so this effect is entirely software generated. You can judge for yourself in the sample shots above.

Switching between a S10, S10+ and S10e for the past few days might be throwing me for a loop, especially when it comes to screen size. The S10e is a lot smaller than the S10+. It’s likely that you’re not going to go from an S9+ to S10e since you probably like bigger phones. The S10e is slightly smaller than the S10 (5.8-inch vs. 6.1-inch), and in use, you won’t notice much of a difference.

It’s a bit more compact, but you still get a comparable typing experience and identical preloaded home screens. Additionally, Samsung’s One UI looks good on the S10e and I like the reorganized notification pull down menu. It feels closer to clean Android with a certain Samsung twist to it.

You can also customize app icons and whole themes. The default seems a bit big and vibrant, but it will come down to personal preference, as is the case with most software features.

Bixby is here and the dedicated button, like on the S10 and S10+, is still here. There is limited remapping that you can do, namely making it a double press to activate. As of now, there is no way to swap it to the Google Assistant — but fingers crossed — Samsung might have a change of heart in the future.

This is the go-to Galaxy phone

Samsung thought out the lineup well this year; there are only two or three core differences between the S10, S10+ and S10e. Namely the amount of RAM, screen size and the camera. Besides that, it is an even playing field, and I hope that other manufacturers adopt this style. Out of three models, I like the S10e and S10+ the best.

Even though the S10e has only two lenses and is missing an in-display fingerprint sensor, it brings a lot to the table for $749. Sure, it doesn’t have iMessage, FaceTime or iOS, but from hardware alone, it beats out the iPhone XR. Photo quality will ultimately fall to personal preference and whether you like colder or warmer tones better. Samsung and Apple have their own image processing techniques.

In the end, the Galaxy S10e is Samsung’s phone for everyone. It’s for the everyday consumer. If you choose to buy an S10e, you’ll like it.

Oh, and most important, the S10e comes in fun colors like Flamingo Pink, which lets your personality shine through.

Note: The prices above reflect the retailer’s listed price at the time of publication.