The officiating in the Rockets vs. Warriors series threatens to define the rivalry

10:55 PM ET OAKLAND, Calif. — The worst-case scenario for the NBA, its fans and the game itself is for the Golden State Warriors... 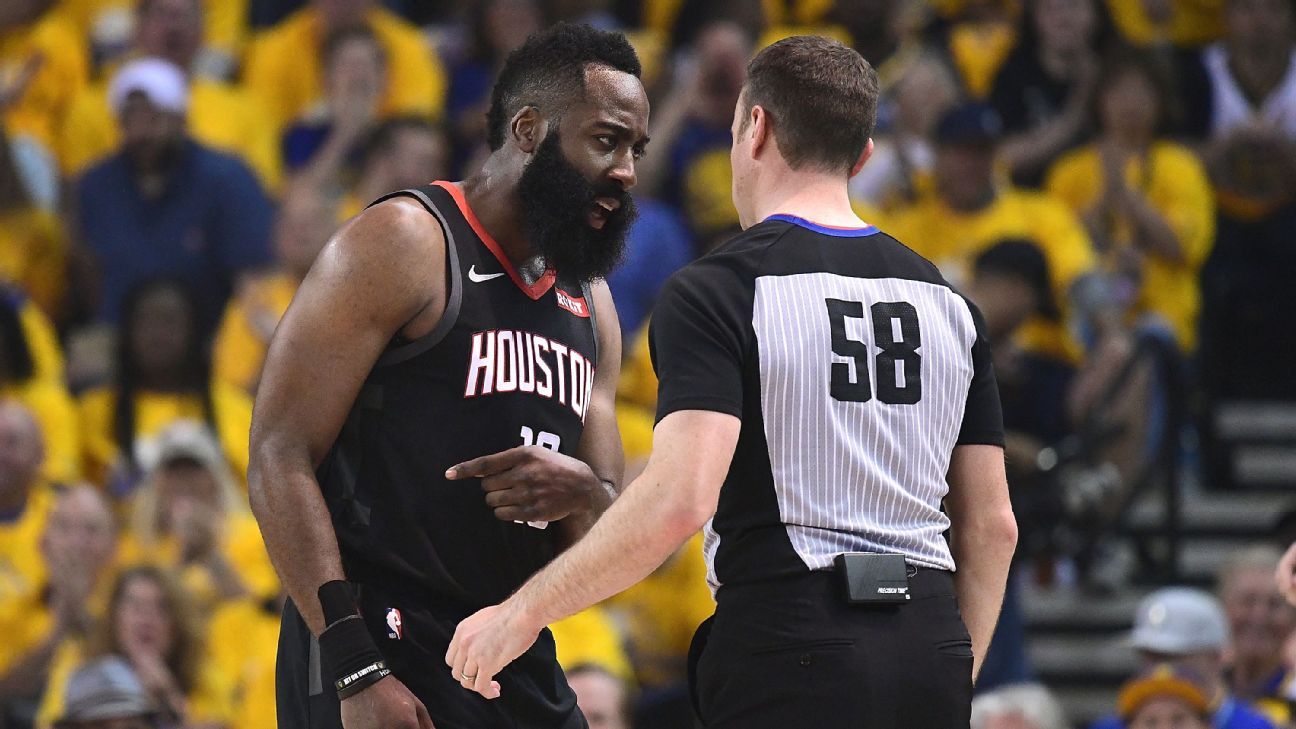 OAKLAND, Calif. — The worst-case scenario for the NBA, its fans and the game itself is for the Golden State Warriors vs. Houston Rockets series to come down to a he said, he said on officiating.

This is a series rematch that has been a year in the making, perhaps the series that will determine this season’s champion, as it was last season. History and legacy are on the line — it’s that type of series. Then there’s the short-term, specifically the free-agency implications.

The Rockets have a strategy that pushes the limits of the rules, while the Warriors are as sly as any team in history. They’re both fantastic at what they do. And they are both relentless on the officiating — there were four technicals and an ejection right out of the gate in Game 1.

No one wanted Game 1 — an ugly but still highly competitive and entertaining opener that ended in a 104-100 Warriors win — to be defined by calls or non-calls. But, largely, it was. There just may be no end in sight.

It’s easy to forget there are three teams on the floor at all times. Ideally, one of them remains anonymous and forgettable. The stakes and the nature of these teams make that most difficult.

When referees prepare for games, they go over film and tendencies, just like the teams. It is well known that the Rockets have a penchant for drawing fouls on 3-pointers. This is a part of their attack. James Harden drew 95 fouls on 3-pointers this season. He is one of the best in the history of the game at it.

So here it was. There were 10 seconds left and the Rockets were down 3. Harden, one of the greatest ever at drawing a foul, takes a 3-pointer to try to tie the game. Draymond Green, one of the great defenders of this era, leaps to challenge it.

Green comes forward into Harden’s area. Harden’s legs jackknife toward Green and he spills to the ground. Two officials, Courtney Kirkland and Josh Tiven, stare and call nothing.

“Call the game how it’s supposed to be called and that’s it,” Harden said. “And I’ll live with the results. But especially we all know what happened a few years back with Kawhi [Leonard]. That can change the entire series.”

Harden is referring to Leonard getting undercut by Zaza Pachulia in Game 1 of the Western Conference finals in 2017. This is a reference to the stakes. That play changed that game, that series and perhaps that season’s champion.

But then you listen to Green.

“When you land 3 feet ahead of where you shoot the ball from, that really ain’t my issue,” Green said. “I’ve been fouled by James on a James 3-pointer before.”

But here’s the thing. After this crucial moment that was the culmination of an afternoon full of this cat-and-mouse game, Chris Paul grabbed the offensive rebound with a cunning backdoor sprint to get into the paint. He looked to send it back to Harden for another chance to tie. But Harden was on the ground, out of the play. Put there by, well, circumstance. Call it a foul, call it a flop.

In a perfect world, he’d get another chance, and Green another chance to stop him. But this is Rockets-Warriors in the year 2019. So instead Paul got stuck and ran over Klay Thompson, triggering another intense non-call sequence that led to another technical foul and Paul getting ejected. Paul might’ve bumped Tiven in the heat of the moment, yet another thing for the league office to review.

After the game, in the visiting locker room, Rockets coach Mike D’Antoni demonstrated exactly what the rule is for how much space a shooter is supposed to get when he takes off for a jumper. He knows the chapter and verse, including what rights the defender has. It’s a constant topic, given that it’s a big part of what his team does.

Meanwhile, over in the Warriors’ locker room, they whispered about how the Rockets get away with putting two hands on Kevin Durant when he drives to the basket, a violation under the rules. Durant is so dominant with his height and shooting skill that once he gets the ball up and squared, there is really no way to stop him. So teams try everything they can to keep him from getting that ball up over his head.

The Warriors felt Durant should’ve been on the line a lot more.

These were just the Game 1 arguments. In Game 2, it may not be the 3-point landing fouls, it may be Harden’s ability to create contact going to the basket. He’s an absolute master. Or Durant’s use of the rip move, he’s so used to guys trying to slap the ball out of his hands before he raises it that he’s an expert.

Harden finished the game with 14 free throws. Durant had 15.

This is mind-numbing. It’s not the way this should be settled.

But here’s Paul barking at the officials and getting tossed. There’s D’Antoni screaming. Green is claiming he’s wronged over there. Durant is chirping.

In a rivalry that’s so competitive with such narrow margin for error and a seam or two of bad blood, perhaps this is what must be accepted. The search for an edge is relentless between these two teams, it’s part of their DNA.

“That’s just the nature of the game we play,” Green said. “Refereeing is an inexact science. So it is what it is.”