BANGKOK (AFP) – Thailand will not allow Cambodian opposition leader Sam Rainsy to transit through the kingdom in a bid to return to Phnom... 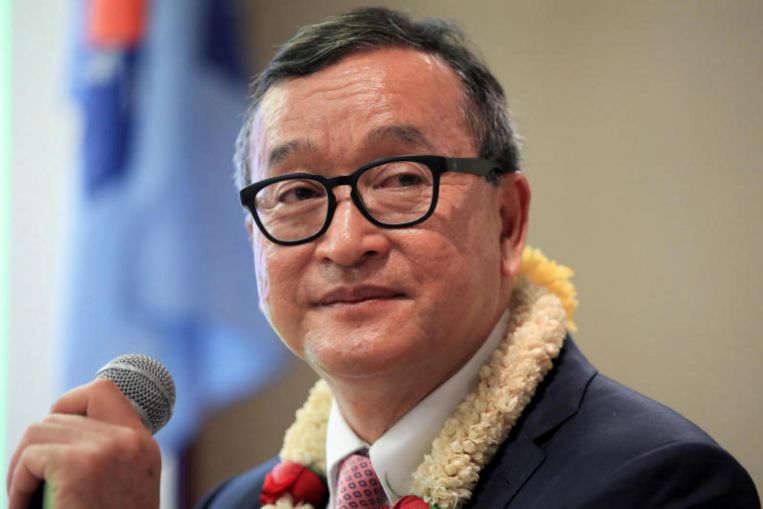 BANGKOK (AFP) – Thailand will not allow Cambodian opposition leader Sam Rainsy to transit through the kingdom in a bid to return to Phnom Penh, Prime Minister Prayut Chan-o-cha said on Wednesday (Nov 6).

Rainsy, who has lived in France since 2015 to avoid jail for convictions he says are politically motivated, has promised a dramatic homecoming on Nov 9, Cambodia’s Independence Day.

But Cambodia’s strongman premier Hun Sen has said repeatedly that arrest warrants for his arch-rival have been sent to neighbouring countries and troops deployed at the Thai-Cambodian border to stop his return.

Mr Prayut confirmed that the authorities are on the lookout for Rainsy and any key opposition members.

“We will not allow anti-government (parties) to use Thailand as a base,” the Thai leader said in an apparent reference to Rainsy’s Cambodia National Rescue Party (CNRP).

The CNRP was dissolved in the lead-up to last year’s heavily criticised elections in Cambodia, which Mr Hun Sen’s party swept, turning the country into a one-party state.

Since then, key opposition members have fled the country. Police have rounded up dozens of opposition activists in recent weeks ahead of Rainsy’s planned return.

In neighbouring Thailand, the authorities were sent photos of the opposition members and Rainsy – who on Tuesday posted a Thai Airways stub on social media showing a seat in his name on a Paris to Bangkok flight on Friday.

But Mr Prayut said the authorities have been told to stop him.

“I do not think he will be able to enter (Thailand),” he said.

Mr Hun Sen has ruled Cambodia for 34 years, but the CNRP and Rainsy – who analysts say remains a popular symbol for change – are thorns in his side.

The tensions were on display on Wednesday when the Cambodian Ambassador to Indonesia Hor Nambora stormed a press conference by deputy CNRP leader Mu Sochua – who is also planning to return to Phnom Penh to support Rainsy.

Organiser Darmawan Triwibowo of pro-democracy NGO Kurawal Foundation said they rebuffed the ambassador’s demands that the “illegal” event be cancelled.

The embassy later issued a press statement calling for Ms Mu Sochua’s arrest and immediate deportation to Cambodia, citing her status as a “fugitive”.

In Malaysia, meanwhile, two opposition activists – one of them an asylum seeker – were detained as they were boarding flights to Thailand, Human Rights Watch’s Phil Robertson told AFP, adding that they will face imprisonment if deported to Cambodia.

“Freedom of expression and association have been so destroyed in Cambodia that now its diplomats think they can extend their rights-violating tactics overseas,” Mr Robertson said.