Teachers on Thursday announced a general strike for Sunday that the government dubbed as “illegal”. Demanding a 50-per cent raise for teachers, the Jordan... 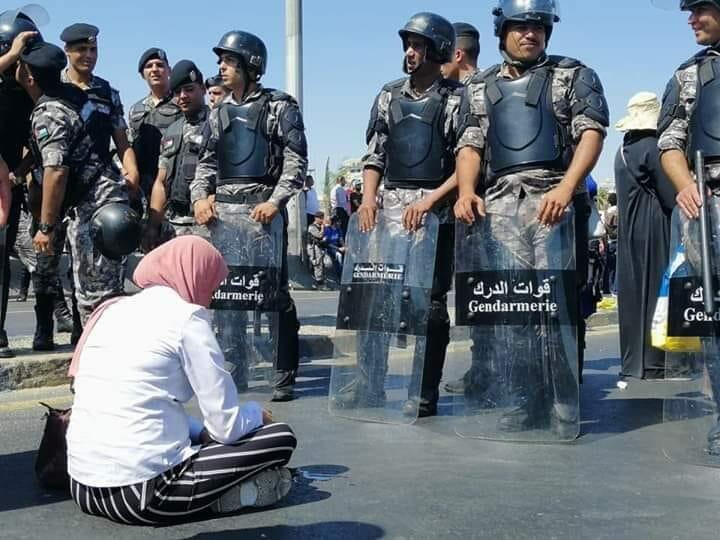 Teachers on Thursday announced a general strike for Sunday that the government dubbed as “illegal”.

Demanding a 50-per cent raise for teachers, the Jordan Teachers Association (JTA) had planned for the sit-in to take place in front of the Prime Ministry, near Fourth Circle, midday Thursday during school hours, but authorities said they will only allow the protest near Parliament in Abdali, which the JTA rejected.

Road closures brought traffic to a halt at intersections leading to Fourth Circle and the Interior Ministry Circle, which are major traffic routes in the city’s morning commute, causing unprecedented congestion in much of Amman, according to the Central Traffic Department.

Muhammad Nasser, an employee at an accounting company in Shmeisani, told The Jordan Times that he could not leave his work in the afternoon to pick up his son from school in Dahiyat Al Rashid due to the unprecedented traffic jams.

The government had announced in 2014 that financial demands are “non-negotiable”, Maani said.

He added that the Ministry of Education and its teachers share a partnership that aims at enhancing the educational process.

The minister explained that the by-law on teaching professions offers a “bundle of performance-based raises” that could amount to up to 250 per cent.

For his part, Abu Yamin highlighted that Article 6 of the Constitution guarantees students the right to education, adding that the state supports freedom of expression “when it is within legal boundaries”.

In 2014, the Law Interpretation Bureau deemed it illegal for teachers to strike, Abu Yamin stressed.

He added that the government is open to dialogue and that any threats to the state will be dealt with in accordance with the law, noting that “the ball is in the JTA’s court”.

He explained that Thursday’s sit-in, which was scheduled for 12 noon and meant that teachers would abandon students on a school day or send them home, went against Article 5 of the JTA’s law, which prohibits tampering with the rights of students to learn.

In a statement earlier in the day, the government said it is willing to discuss the demands of the teachers, provided that they “consider the national interests and the right of students to education”.

It noted that it had held several meetings with the JTA council until both sides reached an agreement on endorsing the educational professions by-law that offers a raise track of up to 250 per cent based on performance.

“The government is keen on improving the educational environment for teachers and students alike and, in return, it will not hesitate in applying the law if the educational process, services and public facilities are harmed,” the statement added.

Meanwhile, Amman Governor Saad Shehab blamed the teachers for the traffic jams, saying that the closures of several main roads leading to Fourth Circle were conducted because teachers “insisted on holding their sit-in at that area, which contradicted with the authorities’ decision to hold the protest in Abdali”.

Thursday’s sit-in was called for by JTA former president Ahmad Hajaya, who died in a road accident last Friday.

“We have been demanding the 50-per cent increase since 2014 or 2015, and the JTA has been contacting the government ever since, but nothing happens, so today we are out here to voice this demand,” Ali Ahmad, one of the teachers at the strike, told The Jordan Times on Thursday.

He said that many teachers have come to the Fourth Circle from southern governorates and all the protesters were not allowed to reach the agreed upon area by the authorities.

Mohammad Sandouqa, another teacher present at the strike, said that an agreement was reached at some point to gradually disburse the 50-per cent increase over three years but that also did not happen.

He also highlighted that in the last five months, fromer JTA president Ahmad Hajaya had been voicing the demand but to no avail.

“Therefore, it was agreed upon three weeks ago to stage the sit-in on Thursday in order to make our voices heard,” he added.

The civil society coordinating coalition in Jordan, HIMAM, criticised the government procedures to deter teachers from holding their protests, considering strikes and peaceful assemblies as a key right guaranteed by the Constitution.

Commenting on the JTA protest, the Muslim Brotherhood Group Society called for considering national interests and expressed concerns that “the biggest loser will be students in particular and the homeland in general”, according to Petra.

The society also said that the decline of the economic conditions for all segments of the Jordanian society, mainly public employees, has become a source of worry, and that the government has to find creative solutions to resolve this case as quickly as possible.

For his part, Chairman of the National Centre for Human Rights’ Board of Trustees Rhayel Gharaibeh said that the government has always been open to dialogue with teachers, noting that he contacted Prime Minister Omar Razzaz who expressed readiness to meet and talk.