The Taliban detonated a car bomb near a government security compound in Ghazni, Afghanistan, on Sunday, killing at least eight security personnel and six... 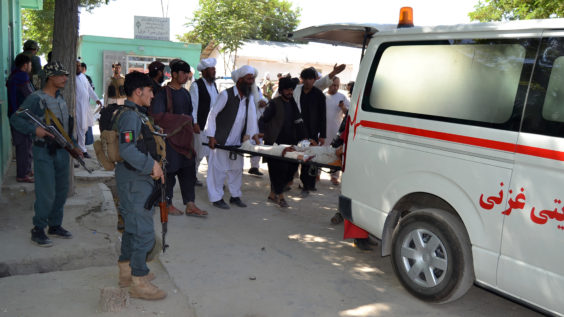 The Taliban detonated a car bomb near a government security compound in Ghazni, Afghanistan, on Sunday, killing at least eight security personnel and six civilians, and wounding over 140, officials said. “The casualty figures may rise, as this is not the last report of those injured in the powerful blast,” said Zaher Shah Nekmal, a health director in Ghazni province. The blast, the latest in a wave of attacks by the Islamist group, follows a Taliban-planted bus bomb near the US Embassy and an Afghan Defense Ministry compound in the capital Kabul last week that killed six people and wounded 105 others, about half of them children. The violence comes amid the seventh round of US-negotiated peace talks between Taliban officials and Afghan delegates in Doha, Qatar. US Special Envoy Zalmay Khalilzad tweeted on Saturday that the latest discussions had been “the most productive session to date” and “substantive progress” had been made. The meetings have focused on a Taliban demand that foreign forces leave Afghanistan, and on a US demand for a guarantee that the country will not be used as a base for attacks elsewhere, as Washington tries to end the longest war in American history.