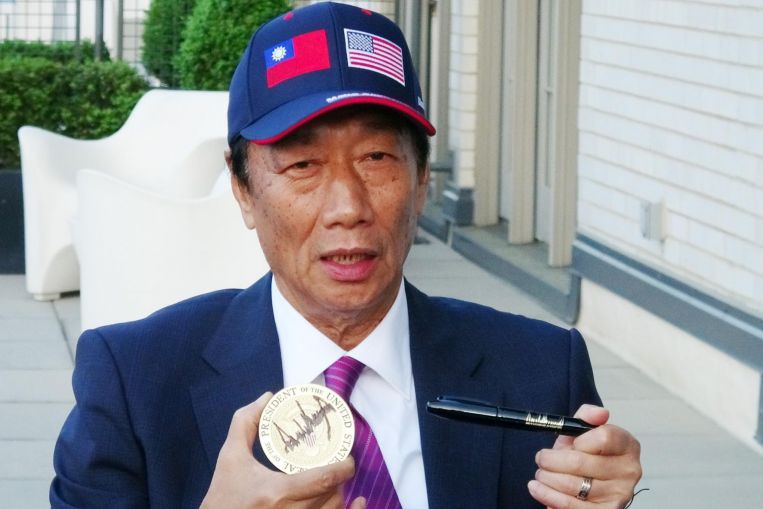 TAIPEI (AFP, BLOOMBERG) – Taiwan’s wealthiest man and presidential hopeful Terry Gou said he met Donald Trump inside the White House on Wednesday (May 1) with the American leader warning him that the job he is going for is “tough”.

Gou, the head of tech giant Foxconn, made a surprise announcement last month that he plans to run for president in next January’s elections after declaring the sea goddess Mazu urged him to do so.

The 69-year-old tycoon is seeking the nomination of the Beijing-friendly Kuomintang (KMT) opposition party but his huge factories in the mainland have sparked concern over his cosiness with Beijing.

No sitting American president has met a prospective Taiwanese presidential candidate since the US cut ties with Taiwan in 1979.

But Trump has tested the boundary before, holding an unprecedented phone call with Taiwanese President Tsai Ing-wen in the window between his 2016 election and inauguration – a move that prompted protests from Beijing.

A stream of Taiwanese politicians have been beating a path to Washington in recent months, hoping to drum up support within the island’s diaspora and among influential US officials.

But only Gou has managed to secure a face-to-face with Trump.

“If I am elected president of the Republic of China, I will be a peace maker and won’t become a troublemaker… I will strengthen Taiwan and the US economically,” Gou told reporters in Washington after the meeting.

He also boasted of his White House connections in a swipe at the ruling Democratic Progressive Party, which is much more sceptical of Beijing.

“We have been given the highest courtesy, (an invite) to the Oval Office, tell me until now which DPP official has such a capability?” he said, later showing reporters a coaster and pen embossed with Trump’s signature.

Asked what Trump had told him, Gou said: “He replied that (being a president) it’s a tough job.”

Taiwan has re-emerged as a flash point between the US and China, as Tsai seeks Washington’s support to counter a global isolation campaign by Beijing.

China hawks in the US have advocated increased diplomatic and military ties, including weapons sales and high-level visits, as part of a “whole-of-government” approach to push back against growing Chinese clout in the Asia-Pacific.

Gou made his billions through Foxconn, which assembles Apple and Huawei phones as well as parts and accessories for other major international brands.

The bulk of Gou’s investments are in China, employing more than one million workers in the country where cheap labour helped fuel his company’s meteoric rise.

Foxconn has vowed to build a US$10 billion (S$13.5 billion) display screen factory in Wisconsin, creating 13,000 jobs, with Trump and Gou breaking ground together at a ceremony two years ago.

The Taiwanese billionaire’s company has said that complex would crank out displays as part of a global manufacturing empire stretching from Brazil to China.

But the project has since been hit by uncertainty over how many jobs will really be created and the huge tax breaks offered to Foxconn.