Syria’s foreign minister demanded on Saturday that American and Turkish forces evacuate the war-ravaged country immediately or face “any and all countermeasures authorized under... 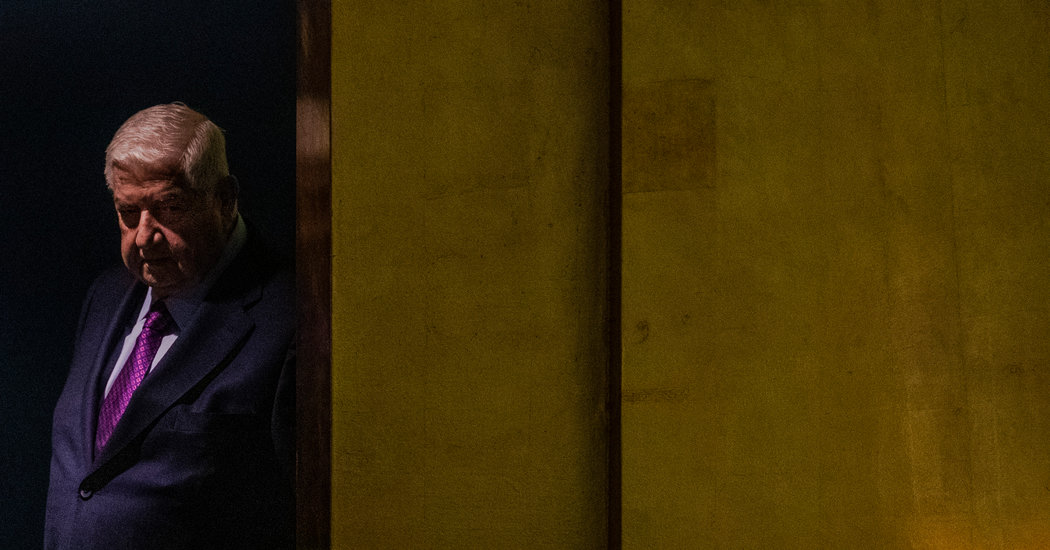 Syria’s foreign minister demanded on Saturday that American and Turkish forces evacuate the war-ravaged country immediately or face “any and all countermeasures authorized under international law.”

Syrian officials have made similar threats in the past to push unauthorized forces from the country but have never taken serious steps to do so. Syrian troops, which have been ground down by years of war and defections, are in no shape to fight the United States, and it appears that the country has calculated that any attacks on American forces would bring about a formidable response.

In a speech before the United Nations General Assembly, the foreign minister, Walid al-Moallem, said the United States and Turkey “maintain an illegal military presence in northern Syria.”

“Any foreign forces operating in our territories without our authorization,” he added, “are occupying forces and should withdraw immediately.”

Mr. al-Moallem’s demand comes after the United States and Turkey reached an agreement in August to jointly patrol a strip of land in the country’s northeast that borders Turkey. President Recep Tayyip Erdogan announced that he intends to use the strip, known as a “safe zone,” to repatriate at least one million Syrian refugees.

Mr. al-Moallem described Turkey and the United States as “arrogant” for holding discussions and an reaching agreements on the safe zone without Syrian consent, and he declared their agreement void.

Syria’s eight-year civil war has abated, with most of the country now under government control. But America is backing Kurdish groups, who along with other rebels and extremists, still hold parts of Syria.

The number of American troops in Syria has fallen since December from 2,000 to around 1,000; they remain in the country mainly to help stamp out pockets of fighters from the Islamic State, or ISIS.

President Trump announced in December that he wanted to immediately withdraw all United States forces from Syria, declaring that “We have won against ISIS.”

But when military officials and American allies balked, he agreed to slow down the pace. This month, the Pentagon announced it was preparing to send an additional 150 troops to Syria to patrol the safe zone.

A United Nations-affiliated committee plans to meet in Geneva on Oct. 30 to begin drafting a new Syrian Constitution that could help the warring parties reach a political settlement and end the war, The Associated Press reported. The Syrian-led committee will include representation from the government, from the opposition and from civil society.