A convoy of armoured personnel carriers near the border with Syria, on the outskirts of Hassa, Turkey ... 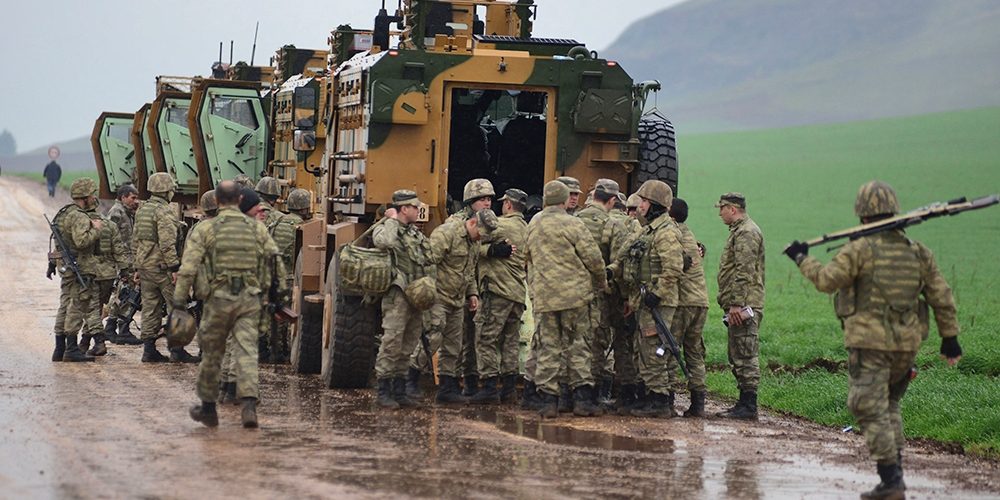 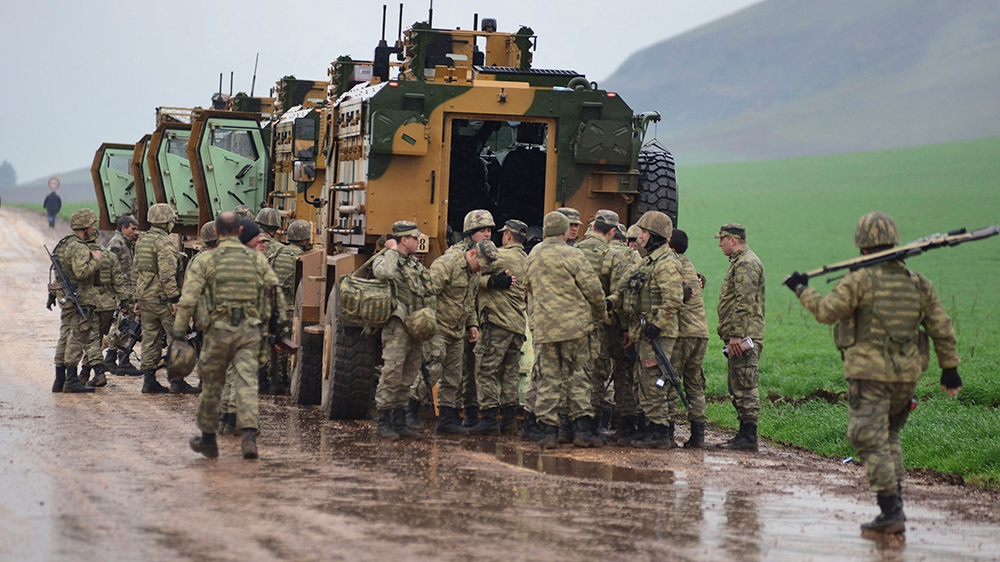 A convoy of armoured personnel carriers near the border with Syria, on the outskirts of Hassa, Turkey [File: Caglar Ozturk/DHA-Depo Photos via AP Photo]

Russian warplanes have targeted positions near a Turkish convoy that was stranded on a highway in northwest Syria after crossing into Idlib province, a war monitor and witnesses say.

The UK-based war monitor said a fighter belonging to a Turkey-backed faction accompanying the convoy was killed on Monday while others were injured.

Syrian state media, Sana, said the Turkish convoy entered the town of Khan Sheikhoun in Idlib to help armed rebel groups fighting a government advance, denouncing the move as an act of “aggression”.

Sana quoted a source in Syria’s foreign ministry as saying the Turkish convoy loaded with munitions crossed to help the “terror” groups in Khan Sheikhoun.

The move would not affect “the determination of the Syrian Arab Army to keep hunting the remnants of terrorists” in the town in Idlib province or elsewhere, Sana cited the foreign ministry source as saying.

He added that the convoy was forced to stop on the Damascus-Aleppo highway near the town of Maarat Al Numan as Russian air strikes targeted positions in the area.

According to al-Khalaf, the convoy remains at a standstill and has not yet resumed its trip towards its destination.

Tueky backs some of the rebels in northwest Syria and has deployed forces into the Idlib region under deals with Russia, Syrian President Bashar al-Assad’s most powerful ally.

A member of a faction belonging to the Turkish-backed Free Syrian Army that had been accompanying the convoy has been killed in the attacks, while others were injured, al-Khalaf added.

“It is clear that the Syrian-Russian alliance wants to send a direct message to the convoy: not to approach the areas where heavy clashes are taking place in and around Khan Sheikhoun,” he said.

Khan Sheikhoun, a major rebel-held town controlled by the Hay’et Tahrir al-Sham group – a former al-Qaeda affiliate – is one of Idlib province’s outer areas that lies on a key highway that connects government-held Damascus with the northern city of Aleppo.

The town is currently witnessing advances by government forces, which are seeking to surround and enclose the area. If they succeeded, they would also surround a Turkish military observation point in the area, al-Khalaf noted.

The advance would encircle rebel fighters in their only patch of territory in neighbouring Hama province.

The region in northwestern Syria is home to three million people and is part of the last major foothold of opposition to President Bashar al-Assad.

Air raids on the area have intensified in recent days after a short-lived ceasefire.

Colonel Mustafa Bakour of the Jaish al-Izza rebel faction said battles raged on the outskirts of the town.

Fighters arrived to reinforce the frontline, he said, including some from the National Army, a Turkey-backed rebel force based further north near the border.

The United Nations has called for respect for the lives of civilians as well as medical and humanitarian workers, saying the death toll is “rising every day”.

In the past four months, the UN documented 500 civilian deaths. It also said 42 attacks on healthcare facilities were reported during the period.

Russia and Syria say their forces are targeting the rebel groups, including Hay’et Tahrir al-Sham, and not civilians.