SYDNEY • Sydney residents were warned of “catastrophic” danger yesterday, and a state of emergency was declared as Australia girded itself for a fresh...

SYDNEY • Sydney residents were warned of “catastrophic” danger yesterday, and a state of emergency was declared as Australia girded itself for a fresh wave of devastating bush fires.

For the first time, Australia’s largest city and the surrounding area faced the top level of fire warning – with the authorities saying “lives and homes will be at risk”.

Home to more than five million people, Sydney is ringed by large areas of bushland, much of which remains tinder dry following little rain across the country’s east coast in recent months.

Bush fires are a common and deadly threat in Australia’s hot, dry summers but the current severe outbreak, well before the summer peak, has caught many by surprise.

“There is nothing built or designed to withstand… catastrophic” conditions, said Mr Shane Fitzsimmons, commissioner of the rural fire service for New South Wales (NSW) state, which encompasses Sydney.

“Everybody has to be on alert no matter where you are, and everybody has to assume the worst, and we cannot allow complacency to creep in,” Ms Berejiklian told reporters in Sydney.

“Tomorrow is about protecting life, protecting property and ensuring everybody is safe as possible,” she added. 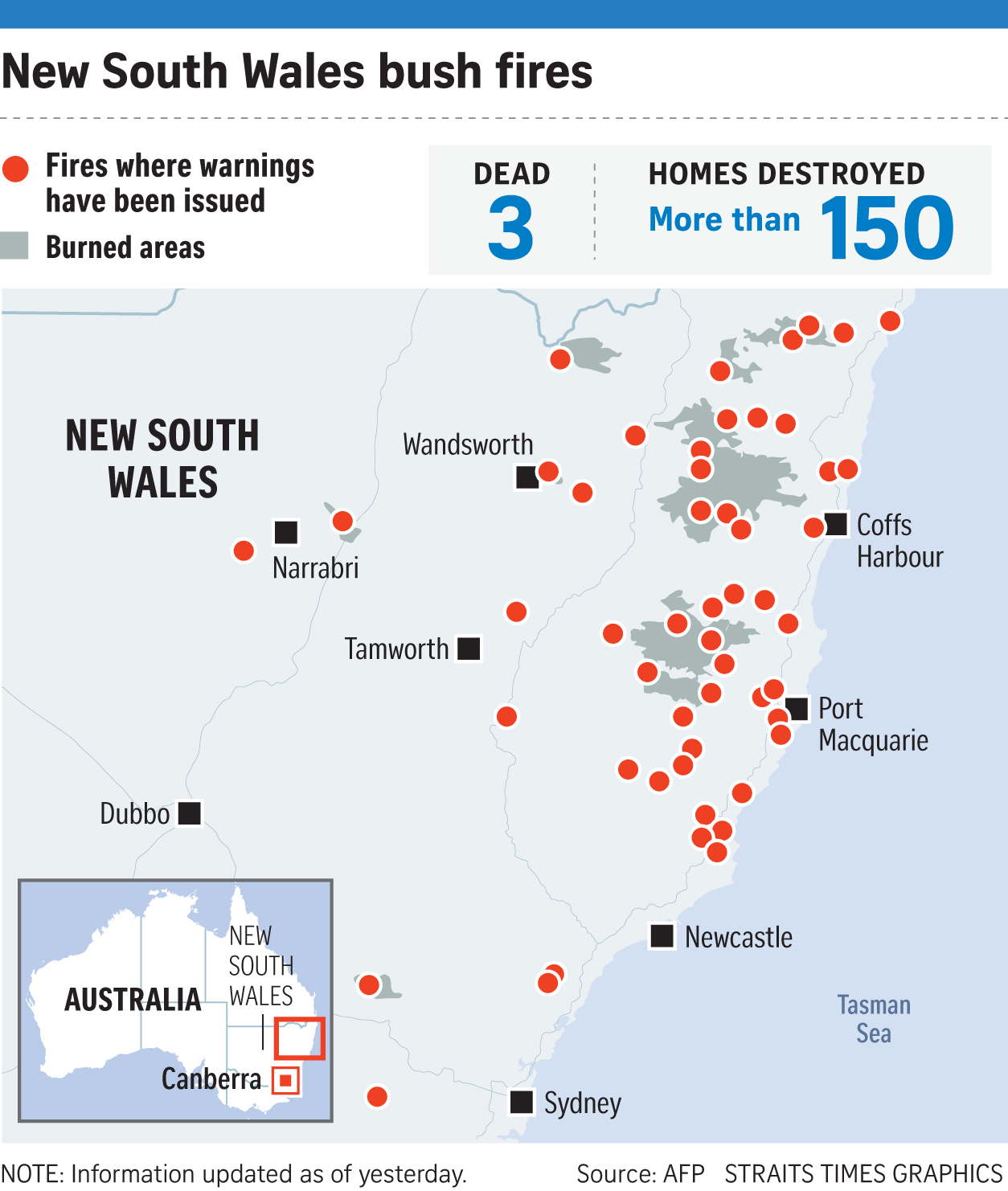 More than 350 schools will be closed, a broad fire ban has been put in place and the military is providing logistic support for firefighters.

Three people have died, thousands have been displaced, and more than 150 homes destroyed by dozens of out-of-control blazes in the state’s north.

In the past few months, an area of roughly 11,000 sq km – larger than Jamaica or Kosovo – has been scorched, according to the New South Wales fire service.

Yesterday afternoon, the fire service authorised use of the Standard Emergency Warning Signal, an alarm and verbal warning that will be played by radio and television stations every hour.

Mr Fitzsimmons urged people to evacuate before conditions worsened, warning that new fires can begin up to 20km ahead of established blazes. The authorities stressed that even fireproofed homes will not be able to withstand catastrophic conditions.

The fires have already had a devastating impact on Australia’s wildlife, with about 350 koalas feared dead in a major habitat.

Many fires have been burning since last month. Mr Paul Read of Monash University said there will be a broader risk associated with smoke haze.

“An air quality index above 300 is considered hazardous to everybody, not just the vulnerable,” he said, adding that that level had already been breached in multiple locations, including Sydney.

Haze was reported as far away as New Caledonia, almost 1,500km across the Coral Sea.

The severity of the fires so early in the season has sparked arguments about the threat from climate change and fresh criticism of the conservative government’s refusal to curb the use of fossil fuels.

Deputy Prime Minister Michael McCormack, leader of the rural National Party in the governing coalition, drew ire for suggesting now was not the time to talk about the climate.

“We don’t need the ravings of some pure, enlightened and woke capital-cities greenies at this time, when (people) are trying to save their homes,” he said.