By Mudassir Raja It goes beyond saying that the recently concluded Summer Entertainment City (SEC) at Doha Exhibition and Convention Centre (DECC) proved to... 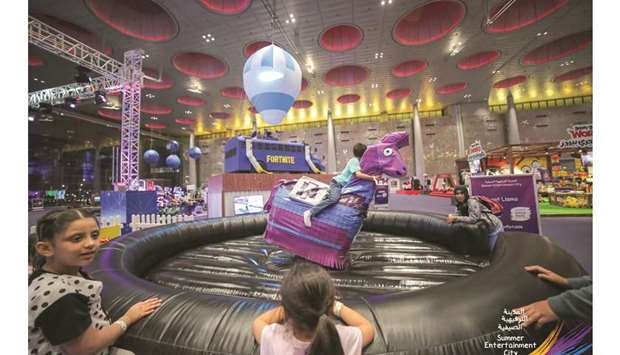 It goes beyond saying that the recently concluded Summer Entertainment City (SEC) at Doha Exhibition and Convention Centre (DECC) proved to be a crowd pulling indoor festivity for families and kids.
Over 55, 000 people visited DECC where the 3rd edition of SEC was held for over six weeks. According to the organisers about 75 percent of the visitors were Qatari nationals and their families.
The all-entertaining event, organised by QSports in collaboration with Qatar National Tourism Council (QNTC), is all set to reopen on August 9 on the eve of Eid al-Adha. The facility that will run until August 23 will include many new attractions for the visitors especially for the children.
In an interaction with Community, Aya Kassab, Head of Business Development Unit at QSports, said: “The Entertainment City has been a very successful summer festival in the sense that it provides entertainment, recreation, edutainment, education, infotainment, cultural, cuisine and a lot of other activities for the visitors under one roof.
“Keeping in view the keen interest shown by the visitors in the City, we along with QNTC have decided to reopen the facility at DECC for Eid al-Adha. We are hopeful that the Eid this year will witness a large number of residents, especially families and children, enjoying the various offerings at the Entertainment City.
The 29,000sq m facility, which has been dubbed as the Summer in Qatar campaign’s centrepiece, will again feature an array of rides, skill games, virtual reality (VR) and video games, live entertainment shows, food court, and pop-up shops.
According to the organisers, the facility that will get going on next Friday will offer inflatable castle, inflata park, jumbo sized inflatable slide, inflatable maze, different rides, video and virtual reality games, amusement rides, education activities and live shows. The new SEC will have 107 attractions of different kinds for the families and children.
The city further includes a Kids’ Driving School, and a Mobile Trampoline Park, a mini golf course, a 1,200sq m skate park, synthetic ice skating, and a child-friendly bull ride, among others.
She noted that the 6,000sq m area that is dedicated for VR and video games is expected to attract more game enthusiasts from August 9 to 23.
This section of the City hosts some of the world’s most-advanced VR simulators, gaming stations and themed gaming areas, including Pac-Man, Beat Sabers, and FIFA.
As far as the attractions for the adults go, the organisers said that they would have about 57 retail shops selling items of daily use and cosmetics from different countries around the world. Further, there will be 20 food kiosks and 25 food carts for the visitors to satiate their hunger.
Ticket prices range varies. QR15 is entry fee to the new phase of the SEC 2019, or the visitors can purchase a Gold Pass for the entry for QR165. One Gold Pass includes entry to the City coupled with freedom of using 40 different rides plus five VR games. After getting entry, the visitors would have the choice to pay for their selected rides or games for their children. The adults can pay and have their favourti food. They will also have the facility to purchase high quality items from the retail shops that will offer perfumes, carpets, handicrafts, clothes, toys, and other daily use items.
The Entertainment city is the part of the ongoing Summer in Qatar campaign that will end on August 16. The campaign initiated by QNTC offers different in and outdoor activities for the residents during the summer. The programmes include musical shows, comedy events, film awards, sale promotions at prominent outlets in major shopping malls. Different shopping malls have also been organising different activities for kids and families to keep them entertained during the summer days.