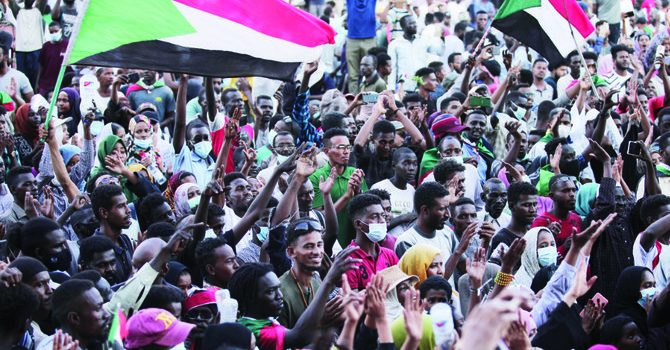 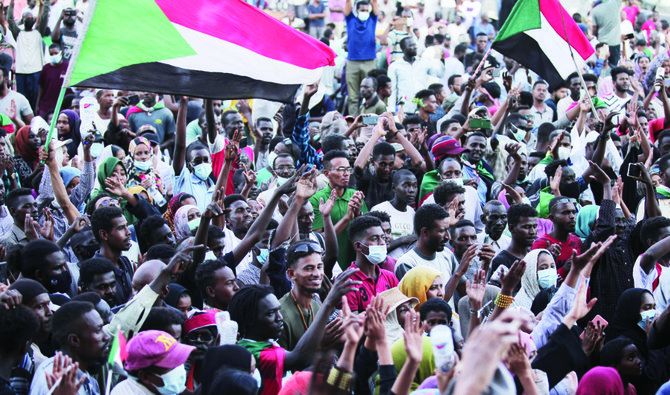 Hundreds of anti-coup protesters rallied on Sunday in Khartoum, as well as in its twin city of Omdurman, Wad Madni to the south, and the northern city of Atbara.

“The authority belongs to the people,” protesters chanted, calling “no, no to military rule,” and demanding a “civilian government.”
Nationwide anti-coup protests have occurred since the Oct. 25 power grab by the army, but have been met by a deadly crackdown.

At least 14 demonstrators have been killed and about 300 wounded, according to the independent Central Committee of Sudan’s Doctors.
“Protesters barricaded the streets, set car tires ablaze, called out against the military rule, and chanted that civilian government is the people’s choice,” said Hoda Othman, who witnessed protests in Omdurman on Sunday.

Almost two weeks ago Gen. Abdel Fattah Al-Burhan dissolved the government, as well as the ruling joint military-civilian Sovereign Council — that was supposed to lead the country toward full civilian rule.

Al-Burhan met with a delegation of the Arab League on Sunday, state television reported.

The Arab League, which has called for Sudanese parties to stick to the democratic transition after the army took over power last month, had said on Saturday that it would send a high-level delegation to Sudan.

Sunday’s rallies followed calls for two-days of civil disobedience made by the Sudanese Professionals Association (SPA), an umbrella of unions which were also instrumental in the 2018-2019 protests which led to the ouster of longtime strongman Omar Bashir in April 2019.
“The Sudanese people have rejected the military coup,” the SPA said, vowing “no negotiation, no partnership, no legitimacy.”
In Khartoum eastern Burri district, protesters built burning barricades of tires.

“Security forces later dispersed the protest by firing tear gas and began removing the barricades,” said protester Mosab Abdalla.
Earlier on Sunday, dozens of teachers rallied against the army outside the education ministry in Khartoum.

“We organized a silent stand against the decisions by Burhan,” said geography teacher Mohamed Al-Amin, who took part in the protest.
“Police came and fired tear gas at us, though we were simply standing on the streets and carrying banners.”

There were no confirmed reports of casualties but about 87 teachers have been detained, according to the SPA.

The teachers’ rally came after the military leadership replaced heads of department at the Education Ministry, as part of sweeping changes it made in multiple sectors.

“The protest rejects the return of remnants of the old regime” linked to now jailed ex-resident Bashir, the teachers’ union said.
The SPA’s appeals for the civil disobedience were circulated via text messages to bypass internet outages since the putsch.
On Sunday, there appeared to be mixed compliance with the call among retailers.

Some shops were still open but others were shuttered in Khartoum, as well as in the neighboring cities of Omdurman and Khartoum-North, according to witnesses.

The military takeover sparked international condemnation, including punitive aid cuts and demands for a swift return to civilian rule.
Al-Burhan insists it “was not a coup” but a move to “rectify the course of the transition.”
On Thursday, the military released four civilian members of the government.

But other key officials are still under guard and, on that same day, security forces arrested other civilian leaders near a UN building in Khartoum, following their meeting with UN Special Representative for Sudan Volker Perthes.

“We call upon the military leadership to cease arresting politicians and activists and to stop committing human rights violations,” Perthes said afterwards.