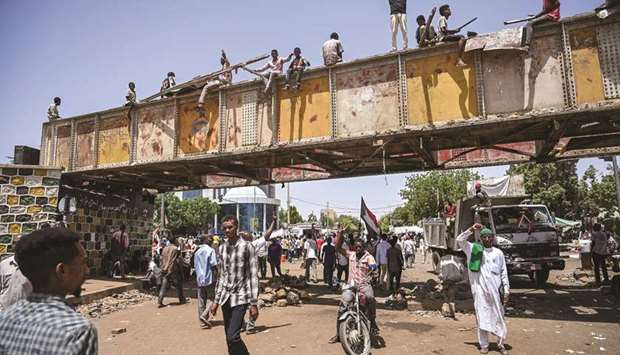 Sudanese protesters yesterday welcomed a breakthrough in talks with army rulers who agreed to form a joint civilian-military council, paving the way for the civilian administration demanded by demonstrators.
Saturday’s agreement would replace the existing 10-member military council that took power after the army ousted veteran leader Omar al-Bashir on April 11 amid massive protests.
“What happened yesterday is a step to have a civilian authority,” said Mohamed Amin, one of thousands of demonstrators who have been camped for weeks outside the army headquarters.
“We are happy about the progress in the talks, but we are still waiting for the composition of the council and the civilian government.”
The joint civilian-military council would be the overall ruling body, the protest leaders say, while a new transitional civilian government was expected to be formed to run the country’s day-to-day affairs, a key demand of protesters.
That civilian government would work towards having the first post-Bashir elections.
The demonstrators said they would pursue their sit-in until a civilian administration is set up.
“Last night’s agreement is a step forward in the stability of our country. But I don’t think we will leave the sit-in until we achieve our demand of a civilian government,” said protester Sawsan Bashir.
Protest leader Ahmed al-Rabia confirmed to AFP the decision to form a joint council.
“We are now in consultation about what percentage of the council should be represented by civilians and how much by the military,” said Rabia, who is involved in talks.
Yesterday, protest leaders from the Alliance for Freedom and Change met to discuss the progress of talks with the military council.
But the joint committee talks that were expected yesterday were cancelled, activists said.
Activists say the new council could be a 15-member body, with eight civilians and seven army generals.
The decision to have a joint council came after hours of talks on Saturday, the first by a joint committee representing the current ruling military leadership and protesters.
Bashir was ousted by the army after months of protests against his three-decade rule.
Thousands of demonstrators, braving volleys of tear gas fired by security forces, reached the sprawling military headquarters on April 6, demanding the army support those opposing Bashir.
Five days later, the army toppled Bashir and took power through a transitional military council.
The military council has so far insisted it has assumed power for a two-year transitional period.
Western governments have expressed support for protesters’ demands, but Sudan’s key regional lenders have backed the military council, while African states have called for more time for the army to hand over to civilians.
Last week, Saudi Arabia and the United Arab Emirates announced $3bn (2.7bn euros) in financial aid for Sudan following Bashir’s overthrow.
Sudan’s economy has worsened over the years, hit by multiple armed conflicts and secession by oil rich South Sudan in 2011.
As the joint committee met on Saturday, top opposition leader and former premier Sadiq al-Mahdi told reporters Sudan should “immediately” join the International Criminal Court.
The Darfur war erupted in 2003 when ethnic minority rebels took up arms against Khartoum’s government, accusing it of social and political marginalisation.
The UN says about 300,000 people have died in the conflict, with another 2.5mn displaced, many of them still living in camps across the western region. Protest group spokesman Amjad Farid said Bashir and other regime figures could be tried in Sudan.
“We are not seeking retaliatory measures against them, but we want to rebuild our justice system to hold them accountable for their crimes,” he said.
Mahdi, who was forced from office by Bashir in a 1989 coup, said the army’s ouster of the veteran leader was “not a military coup”. But “the toppled regime might still try to do a coup,” he said, without elaborating.
A  rally called today has been cancelled, while the military council dissolved the country’s labour association, a statement said.