Study Shows the Healthiest Part of an Apple

By Najja Parker/The Atlanta Journal-Constitution Love munching on apples? You could be missing out on the best part of the fruit, according to a... 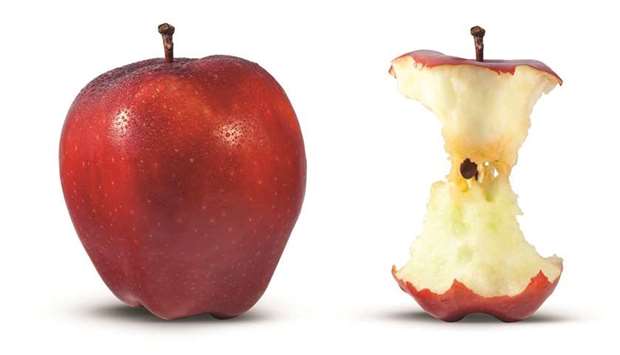 Love munching on apples? You could be missing out on the best part of the fruit, according to a new report.
Researchers from Graz University of Technology in Austria recently conducted a study, published in the Frontiers of Microbiology journal, to explore how the food’s bacteria, much of which promotes gut health, affects the human body.
To do so, they assessed the bacterial content of the different components of an apple, including the stem, peel, fruit pulp, seeds, and calyx. They examined both organic and conventional store-bought apples.
After analysing the results, they found a typical 240g organic or conventional apple contains around 100mn bacteria, and much of it is located in the fruit’s core, particularly the seeds. Only 10mn bacterial cells live in the flesh.
“To the heroes among you who eat the whole apple: besides extra fibre, flavonoids and flavour, you’re also quaffing 10 times as many bacteria per fruit as your core-discarding counterparts,” the authors said in a statement.
But organic apples have an edge over the conventional ones, because they “harbour a more diverse and balanced bacterial community – which could make them healthier and tastier than conventional apples, as well as better for the environment,” the team said.
For example, escherichia-shigella, which includes known pathogens, was found in most of the conventional apples but not the organic ones. Lactobacilli, which is a type of probiotic, was found in most organic apples but not conventional ones. And methylobacterium, known to enhance the biosynthesis of strawberry flavour compounds, was more prominent in organic apples.
The scientists now hope to continue their investigations to better understand the bacteria makeup of other fruits.
“The microbiome and antioxidant profiles of fresh produce may one day become standard nutritional information, displayed alongside macronutrients, vitamins and minerals to guide consumers,” the scientists concluded. “Here, a key step will be to confirm to what extent diversity in the food microbiome translates to gut microbial diversity and improved health outcomes.” – Tribune News Service