DALLAS (AP) — Rookie Roope Hintz scored his fifth goal of the playoffs, Tyler Seguin and Alexander Radulov each had two assists and the... 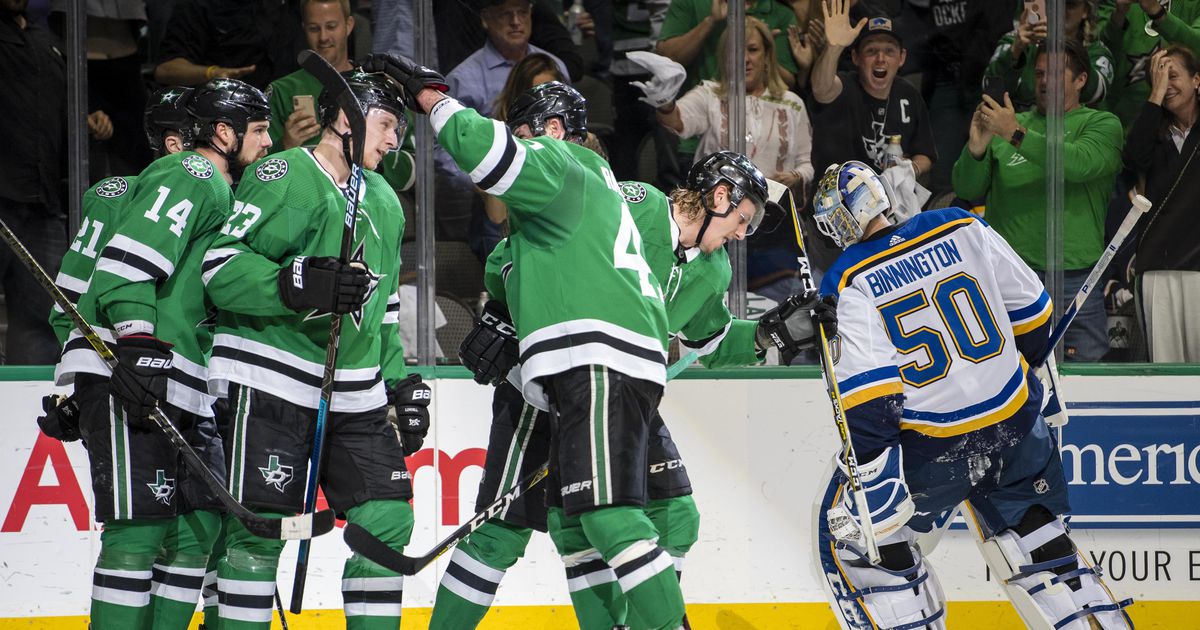 DALLAS (AP) — Rookie Roope Hintz scored his fifth goal of the playoffs, Tyler Seguin and Alexander Radulov each had two assists and the Dallas Stars beat the St. Louis Blues 4-2 on Wednesday night to even the second-round series at two games each.

Rookie coach Jim Montgomery made a significant change by switching up his top two lines, and the move paid off for Dallas. Seguin skated on a line with Jason Dickinson and Mats Zuccarello. That put Hintz, instead of Seguin, with Radulov and captain Jaime Benn.

Dickinson, Jason Spezza and John Klingberg also scored for the Stars, who were down 1-0 only five minutes into the game. Zuccarello also had two assists, giving him six in the series.

Vladimir Tarasenko had a power-play goal for the Blues, who lost for the first time in their five road games this postseason.

Dallas went up 4-1 late in the second period when Radulov and Benn assisted Hintz’s third goal of the series.

About halfway through the second period, Dickinson forced a turnover at center ice. Zuccarello got the puck to Seguin, who made a cross-ice pass to Klingberg, whose sniper shot whizzed to the left of rookie goalie Jordan Binnington and into the net.

Binnington stopped 27 shots, including a backhander by Andrew Cogliano, a breakaway by Miro Heiskanen and another charge by the Dickinson-Seguin line on shifts before Klingberg’s second goal of the playoffs — he had the overtime winner in Game 6 against Nashville that clinched the first-round series.

Ben Bishop didn’t appear shielded when Tarasenko’s fifth goal of the playoffs glanced off the Dallas goalie’s left arm and into the net.

Ryan O’Reilly assisted on both of St. Louis’ goals, including the one by 19-year-old center Robert Thomas in the third period.

Dallas tied it at 1 with 8:38 left in the first period. Zuccarello took a shot that went left of the net and ricocheted off the board. Seguin kept the puck free, and got it to Dickinson, who was falling down in the crease when he scored his third goal of the playoffs. Dickinson, who had only six goals during the regular season, was then on his belly when he celebrated with his arms motioning in what looked like a reverse snow angel.

Spezza scored on a power play in the final minute of the first period to put Dallas up 2-1, when Binnington was shielded by one of his teammates. It was the first lead change between the two teams all season — in this series and during the regular season when the Stars won three of the four meetings.

NOTES: At the end of the second period, Benn poked his stick at Binnington, who reacted with a forearm to the head of the Stars captain. Benn was assessed an unsportsmanlike conduct penalty, while Binnington was given penalties for roughing and slashing. Dallas started the third period on the power play, but didn’t score. That came about a minute after David Perron hacked Bishop in his back behind the Stars net without a penalty. … Perron had a shot in the second period that hit the left post.

Game 5 is Friday night in St. Louis, where the Blues are 2-3 this postseason.