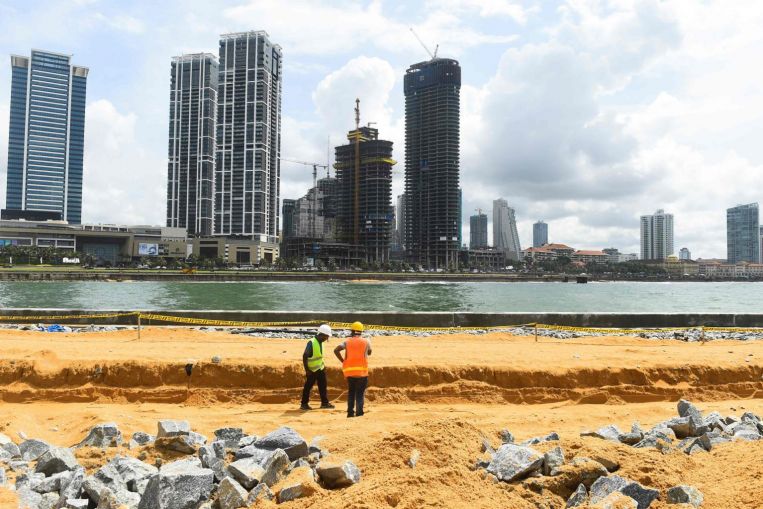 Former Prime Minister Ranil Wickremesinghe in 2017 changed the terms, saying it would be difficult to pay the loans taken to build the project.

He agreed to lease the port for 99 years to a venture led by China Merchants Port Holdings Co. in return for US$1.1 billion (S$1.5 billion). That helped ease the Chinese part of the debt burden raised to build the port, Wickremesinghe said in an interview in 2018.

“We would like them to give it back,” Ajith Nivard Cabraal, a former central bank governor and an economic adviser to Prime Minister Mahinda Rajapaksa, said in an interview at his home in a Colombo suburb.

“The ideal situation would be to go back to status quo. We pay back the loan in due course in the way that we had originally agreed without any disturbance at all.”

In Sri Lanka, where the transaction to lease the port was opposed by Rajapaksa’s party, Mahinda took Chinese loans during his 10-year rule as president to build the project in his home district.

“This is a sovereign agreement” and it’s unlikely that it will be scrapped or altered in a big way, said Smruti Pattanaik, a research fellow at the Institute forDefence Studies andAnalyses in New Delhi.

“The Chinese may reconsider some clause, if it is considered crucial for the Rajapaksa regime.”

An attempt to rework the transaction will help the new Sri Lankan government, led by Gotabaya and his brother Mahinda, showcase their drive to change contracts seen as hurting national security, a key campaign platform for Gotabaya, a former defence secretary.

“China-Sri Lanka cooperation, including the Hambantota port project, are built on the basis of equality and consultation,” China’s Foreign Ministry said in a faxed statement from its spokesman’s office.

“China looks forward to working with Sri Lanka to make Hambantota a new shipping hub in the Indian Ocean and developing the local economy.”

China’s infrastructure-building in Sri Lanka became part of Beijing’s Belt and Road Initiative, prompting concern in India about its geopolitical rival using a port close to its southern coastline for future military or strategic uses. Gotabaya is in India on Friday for his first state visit overseas.

China has dismissed worries over any military dimension to its investment in the Hambantota port, which lies on the main shipping routes between Asia and Europe, and said it was mutually beneficial that would aid Sri Lanka’s economy.

“Sri Lanka will have to offer it something equally, if not more, attractive in financial terms for Beijing to agree to the cancellation of the lease agreement,” said Brahma Chellaney, a professor of strategic studies at the Centre for Policy Research in New Delhi. “With the Rajapaksa family back in power, China hopes to expand its footprint in Sri Lanka.”

A similar port deal under the Belt and Road programme in Myanmar was drastically scaled to US$1.3 billion from US$7.5 billion, while in Malaysia the government cancelled US$3 billion worth of pipelines and renegotiated a rail project in 2019, cutting that one’s cost by a third to US$11 billion.

“Bilateral agreements once you’ve signed those, are serious agreements,” Cabraal said in his house adorned with pictures of local and foreign leaders.

“At the same time, we’ve got to look after the national interests. And if one government had bartered it away, there is a necessity for the new government to find ways and means by which it can be done amicably.”

For its part, China Merchants, whose US$93 billion of revenue dwarfs Sri Lanka’s gross domestic product, has been able to use its experience stretching from China to Europe to help kick start the Hambantota port, which once hardly attracted any ships.