Shaima Saleh AlHusseini, managing director, Saudi SFA, at the Sports for All Challenge event in Riyadh. The Saudi Sports for All Federation (SFA) Thursday... 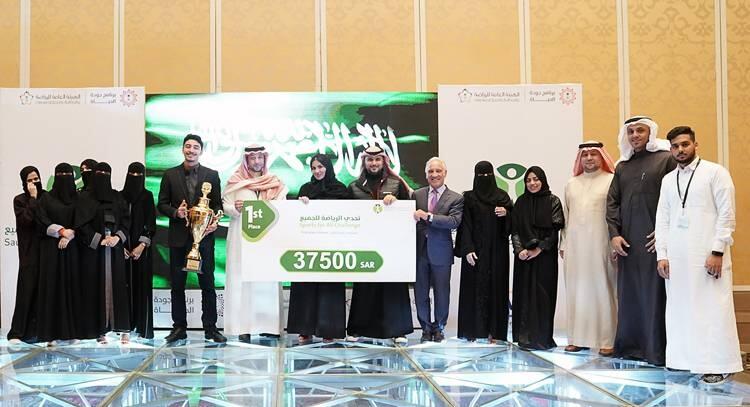 Shaima Saleh AlHusseini, managing director, Saudi SFA, at the Sports for All Challenge event in Riyadh.

The Saudi Sports for All Federation (SFA) Thursday announced the three winning teams in Sports for All Challenge for university students. The winning teams, tasked with developing models that would increase community engagement in physical activities, competed for a top prize of $10,000 for winners, and $5,000 and $3,000 for the second- and third-place teams, respectively.

The Sports for All Challenge saw 18 teams of university students from both Saudi Arabia and the United States develop creative campaigns to encourage local communities to get active and participate in sports, and to contribute effectively towards improving the quality of life and wellness for participants.

Team ‘Endorphin’ of Umm Al-Qura University won the first place. The second place team was ‘150 Minutes’ of Southern Illinois University, and third place went to ‘Your Health in Your Steps’ from University of Hail. The winners were announced at an official awards ceremony held at the Four Seasons Hotel Riyadh at Kingdom Center following two rounds of judging.

The aim of the Sports for All Challenge was to generate new ideas from university students to promote healthier lifestyles and motivate society to get active and take up a sport. The SFA wanted to harness the talents and creativity of young people in order to create a new and dynamic approach.

“The Sports for All Challenge seeks to generate new ideas from the young generation of Saudis to motivate and encourage society to get active and take up a any type of fit activity. We know how talented and creative our young people are, and we want them to be leading the way in promoting healthier lifestyles,” said Prince Khaled.

The Sports for All Challenge, unique in that it is being held across two countries, is an example of how anyone, anywhere can participate in sports of all kinds. “We are encouraged at the approaches all teams are taking and look forward to these campaigns being continued, encouraging everyone to get active and participate in physical activity. This effort is a win-win for all involved,” Prince Khaled added.

Team Endorphin developed a campaign to support and prepare leaders to form their own Community Sports Groups (CSGs). Team ‘Endorphin’ proposed hosting a two-day camp for future sports leaders and encourage them to share their favorite sport with their community.

Team ‘Your Health in Your Steps’ conceptualized collaborating with local authorities to connect 35- to 50-year-old women and men with existing sports services and create new opportunities. CSGs will be organized in each of the nine neighborhoods of Hail and host competitive sports tournaments among the groups.

The team will create a neighborhood hiking challenge, encouraging audience participation with the goal of providing their target audience with information and experiences that will help prevent chronic health issues, such as diabetes and obesity.

Team ‘150 Minutes’ will target Saudi Arabian university students who are between the ages of 18 and 35, helping them to develop a regular exercise routine, which includes 150 minutes of exercise per week for optimum health.

The team created a weekly exercise group on the Southern Illinois University campus that meets three times per week, applying the physical activity guidelines they have promoted. They are also planning a marathon on the SIU campus as well as in Saudi Arabia.