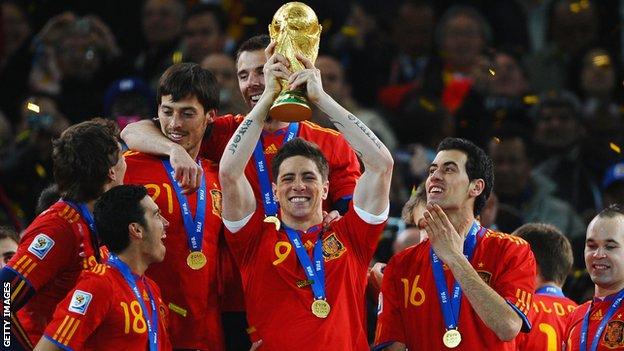 This post was originally published on this site Spanish World Cup winning striker Fernando Torres has announced he is to retire from football. Torres,...

Spanish World Cup winning striker Fernando Torres has announced he is to retire from football.

Torres, 35, played at Atletico Madrid, Liverpool and Chelsea in his 18-year career and is currently at Sagan Tosu in Japan’s J1 League.

“After 18 exciting years, the time has come to put an end to my football career,” he said on Twitter.

Torres said he will hold a news conference in Tokyo on Sunday to “explain all the details”.

In 2011, he was signed by Chelsea for a then British record transfer fee of £50m.

Although he failed to replicate his goalscoring form at Stamford Bridge, he was part of the Blues’ Champions League-winning team in 2012.

He also won the FA Cup and scored in their 2-1 win against Benfica in the Europa League final in 2013.

After 45 goals in 172 games at Chelsea and a brief four-month loan spell at AC Milan, he returned to Atletico in late 2014.

He finished on the losing side as Atletico lost the 2016 Champions League final to Real Madrid, but won a second Europa League in 2018 – his final appearance before moving to Japan.

Torres, who is Spain’s third highest goalscorer with 38, played in six major tournaments including their 2010 World Cup triumph.