The new American spacecraft capable of carrying astronauts and built by SpaceX gently splashed down in the Atlantic Ocean on Friday morning, ending a...

The new American spacecraft capable of carrying astronauts and built by SpaceX gently splashed down in the Atlantic Ocean on Friday morning, ending a successful demonstration trip.

“This is an amazing achievement in American history,” Jim Bridenstine, the NASA administrator, said on NASA Television afterward.

[Sign up to get reminders for space and astronomy events on your calendar.]

The mission, even though there were no astronauts aboard, was a milestone in NASA’s strategy of turning to private companies to provide trips to orbit for its astronauts. Instead of building its own vehicles, like the space shuttles that were retired in 2011, the space agency hired SpaceX and Boeing to develop commercial space systems.

Last Saturday, SpaceX was the first to launch its spacecraft, an upgraded version of the Dragon capsule that has carried cargo to the space station for years. The Crew Dragon capsule docked with the International Space Station a day later. Early on Friday, it left and after a couple of orbits of Earth, it fired its thrusters to allow Earth’s gravity to pull it down.

Mr. Bridenstine praised not only SpaceX and NASA but also earlier presidential administrations. More than a decade ago, NASA under the George W. Bush awarded the first contracts for companies to take cargo to the International Space Station. The Obama administration expanded that to include astronauts.

“We’re going to have numerous providers that are going to compete on cost and innovation,” Mr. Bridenstine said.

The Crew Dragon capsule landed right on schedule, at 8:45 a.m. Eastern time about 230 miles off the east coast of Florida.

“If you missed it, I’m sorry, because that was really cool to see,” Daniel Huot, a NASA spokesman, said on NASA Television.

Even though there were no people aboard, there was a spacesuit-adorned mannequin, nicknamed Ripley after the heroine in the “Alien” movies, sitting in one of the Crew Dragon seats. The mannequin’s sensors will tell engineers how the trip would have been for humans.

The capsule was fished out of the ocean, covered in scorch marks from the atmospheric re-entry that made it look like a toasted marshmallow. Once brought back to shore, the same capsule will be refurbished for another launch, also uncrewed, as soon as June. That trip will be more harrowing — a simulated malfunction of the rocket. The spacecraft’s thrusters will attempt to whisk away the capsule, which will then parachute into the ocean.

If that works, two NASA astronauts will ride in another Crew Dragon capsule to the International Space Station, perhaps as soon as July.

Boeing’s first crewless test of its Starliner capsule is scheduled for the end of April, and its first flight with astronauts could occur later this year.

“These are all capabilities that are leading to a day when we are launching American astronauts on American rockets from American soil,” Mr. Bridenstine said.

For now, NASA astronauts continue to hitch rides on Russian Soyuz rockets. The next launch is scheduled for March 14 with two NASA astronauts, Nick Hague and Christina Koch, and Alexey Ovchinin of the Russian space agency Roscosmos.

On March 29, Ms. Koch will conduct a spacewalk with Anne McClain, a fellow American astronaut. It will be the first time in the history of spaceflight that two women have conducted a spacewalk together.

SpaceX and NASA Launch Is First Step to Renewed Human Spaceflight
The Crew Dragon capsule carried no crew, but it sets up a near future with astronauts traveling to orbit from the United States again. 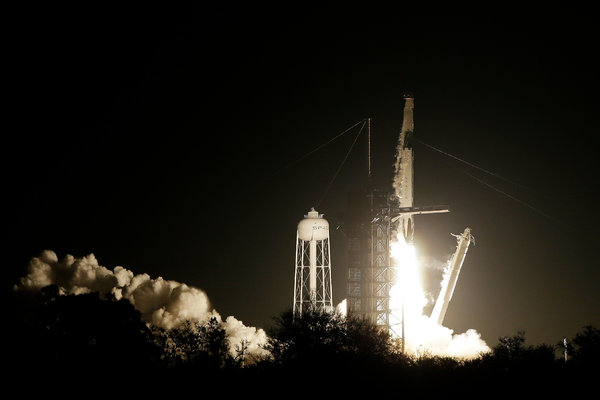