South Korea‘s newly-appointed Justice Minister Cho Kuk, mired in a corruption allegations involving his family, has announced that he is stepping down, after little more than a month in the job.

In a statement published on Monday, Cho said his role for justice reform in the country had “come to an end.”

“I felt apologetic to the people regarding ongoing probes over my family, but put in my best each day as justice minister to reform the prosecution,” he said.

“Now I hope to put everything down and take care of my family, who are going through the toughest and most painful time of their lives.”

Cho was appointed by South Korean President Moon Jae-in on September 9 to lead the reform of the country’s prosecutors’ office.

His appointment, amid a prosecution probe into his family’s financial investments and his children’s’ university admission, had fuelled protests in recent weeks.

On Friday, Yonhap said a “court procedure” involving Cho’s wife, a university professor with the family name Chung, was scheduled to start. 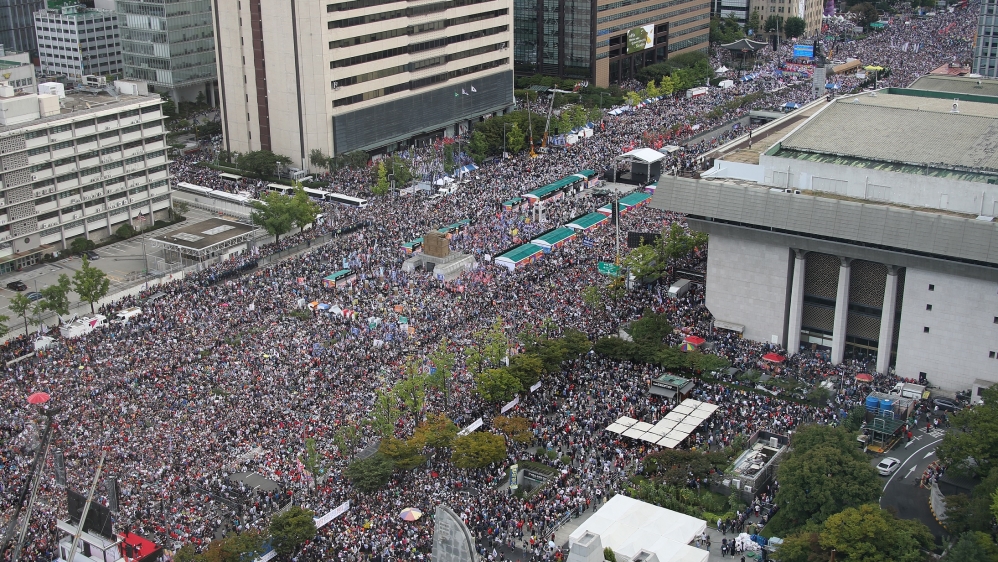 On Saturday, tens of thousands of conservative, anti-government demonstrators took to the streets to call for Cho to resign and for the president to be impeached.

Supporters of Moon’s liberal Minjoo Party and Cho have also held rallies, claiming the investigation is aimed at intimidating Cho, who has pushed for reforms that include curbing the power of prosecutors. They occupied the streets in front of the Seoul prosecutor’s office for the fourth-straight weekend on Saturday.

In South Korea, prosecutors have exclusive authority to indict and seek warrants for criminal suspects and exercise control over police investigative activities. They can also directly initiate criminal investigations even when no complaint has been made.

Critics say such powers are excessive and have prompted past conservative governments to use prosecutions as a political tool to suppress opponents and carry out vendettas.

The conservatives, now the opposition, say the ruling liberals are pressuring prosecutors over a legitimate criminal probe surrounding a key member of the government.

Cho’s resignation comes as President Moon’s approval rating dropped to 41.4 percent, the lowest level since he became president in 2017.