SEOUL (BLOOMBERG) – #BoycottJapan is trending in South Korea. Angered by Japan’s move to restrict exports of vital manufacturing materials to the country, South... 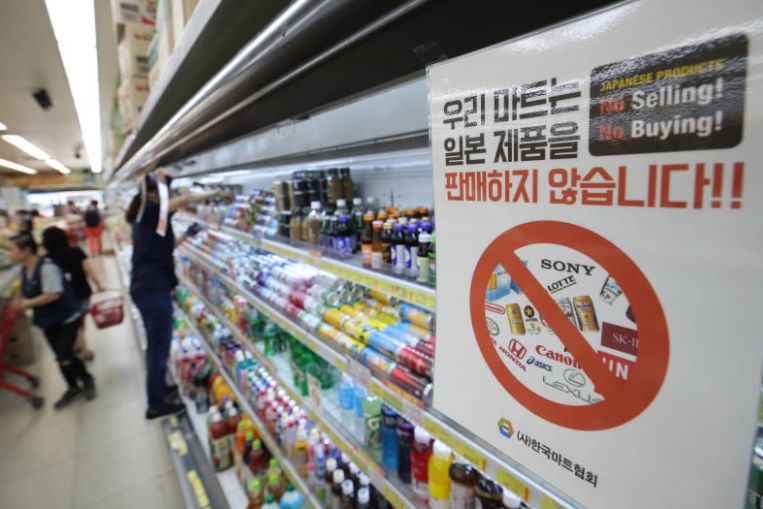 Angered by Japan’s move to restrict exports of vital manufacturing materials to the country, South Koreans have taken to Instagram and other social-media platforms to show their support for boycotts of Japanese travel and consumer products.

More than 2,400 public posts with hashtag #BoycottJapan have been shared on Instagram since the measures were imposed last Thursday (July 4), with some including a picture using Japan’s red rising sun icon as “O” in the word “No”.

While support for any boycott so far appears limited, the push highlights the growing risk of open economic warfare between the two US allies.

The latest flare-up amid decades of ill-will over Japan’s past aggression came when South Korean courts seized assets belonging to Japanese companies they held liable for cases of forced labour during the 1910-1945 period of colonisation.

Although Mr Abe has denied that the export controls are retaliation, the spat has fanned nationalistic sentiments in both countries.

In recent days, South Korean Internet users have been sharing cancellation confirmations for flights to Tokyo, Osaka and other popular travel destinations.

South Koreans make up 13 per cent of spending by foreign tourists in Japan, according to the Japan Tourism Agency, or 584.2 billion yen in 2018.

They have also circulated lists of “Korean alternative” products to replace Japanese goods.

Koreans are being encouraged to shop at SPAO, Samsung C&T Corp’s 8 Seconds or Top 10, instead of Fast Retailing Co’s Uniqlo.

They are also urging people to consider Able C&C Co’s Missha’s beauty products instead of those by Shiseido Co, as well as beer from Hite Jinro Co rather than Asahi Group Holdings.

Fast Retailing gets about 6.7 per cent of its sales from South Korea, while a South Korean joint venture between Asahi and Lotte Chilsung Beverage Co earned less than 1 per cent of its revenue there, according to data compiled by Bloomberg.

Mr Je Hyun-jung, director of the Centre for Trade Studies & Cooperation at the Korea International Trade Association, said that while there is no ban that would impact most consumer products, the uncertainty could disrupt supply chains and increase the costs of doing business.

“This is something that should be resolved politically, not have a damaging impact on the industry,” Mr Je said.

Meanwhile, an umbrella association of South Korean mom-and-pop stores announced its participation in the boycott.

“We will fight Japan’s attitude toward its wartime history and retaliatory measures,” association president Lim Won-bae said in a statement.