SEOUL (BLOOMBERG) – South Korea’s Moon Jae-in has staked his presidency on tackling two big challenges: North Korea and the economy. Both are proving... 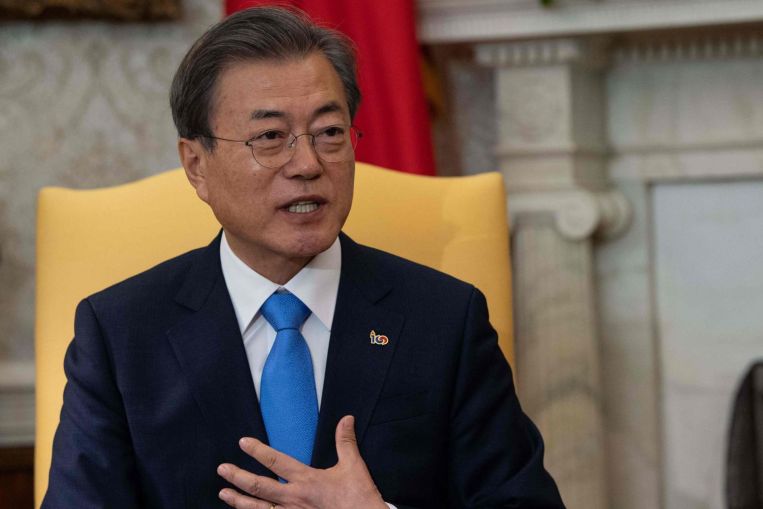 The country’s gross domestic product contracted 0.3 per cent in the first quarter – the biggest decline in a decade – the Bank of Korea said on Thursday (April 25).

The blow came just two days before the President was expected to mark the first anniversary of his historic summit with North Korean leader Kim Jong Un – with an event snubbed by the North Koreans.

“Not only the data today but also latest data showed that the economy is performing worse than expected. It won’t get any easier,” said Professor Park Sangin from Seoul National University’s Graduate School of Public Administration. “It is a very burdensome situation for the Moon Jae-in administration.”

Mr Moon’s policy double-whammy comes as he prepares to enter the third year of his single five-year term. The setbacks threaten to accelerate his shift to lame-duck status ahead of legislative elections next year – a fate that has befallen every democratically elected leader of Asia’s fourth-largest economy and made it more difficult to advance their agendas.

The economic structural problems, including a slowdown in nearby China and weakening global demand for semi-conductors, were going to present any South Korean leader with problems.

So, besides pledging to make himself the “jobs president,” Mr Moon threw himself into convincing Mr Kim and United States President Donald Trump to stop threatening each other with war and come to the negotiating table.

The peace push helped, for a time, to offset the series of economic setbacks, pushing Mr Moon’s approval rating to 83 per cent in the wake of his historic April 27, 2018, meeting with Mr Kim on their militarised border.

But his support has slipped as talks between the US and North Korea faltered.

More than a third of those who were unhappy with Mr Moon’s performance cited the lack of ability to resolve the issues related to the economy and people’s livelihood, while 16 per cent cited his “excessive” focus on improving relations with North Korea, according to the weekly survey.

Mr Trump’s decision to walk away from his Feb 28 meeting with Mr Kim without a deal left Mr Moon exposed to new criticism.

The conservative opposition Liberty Korea Party has grown more emboldened as its own support rate inches up, opposing Mr Moon’s appointments in Parliament and mounting a protest against his North Korea policies last week that organisers say drew 20,000 people.

Meanwhile, Mr Kim has turned up his criticism of Mr Moon, calling on him to stop acting like an “officious mediator” as North Korean state-media escalates complaints over US-South Korean military exchanges.

The North Koreans won’t be attending a series of artistic performances being held on Saturday to celebrate the first anniversary of Mr Moon and Mr Kim’s agreement to achieve a “comprehensive and epochal improvement” in ties between the former foes.

There have been some bright spots for Mr Moon, including his government’s much-lauded handling of a wildfire earlier this month that killed only one person despite consuming 1,760ha of occupied land. Such successes have helped make Mr Moon’s support more resilient than his predecessors’.

But South Korea’s economy will continue to vex the President. The contraction comes even as Mr Moon’s administration ramps up fiscal support, with an extra budget announced this week that came on top of a record budget already in place for 2019.

Exports, which account for about half of South Korea’s GDP, are on course for a fifth-straight monthly decline amid weak demand from China, the nation’s biggest market. And public displeasure has mounted over Mr Moon’s support for sharp minimum-wage hikes, which have been blamed for helping hold the jobless rate at its highest level in about nine years.

Some supporters of Mr Moon’s North Korean policies are urging the President to prioritise economic reforms.

“It’s good to continue to play a facilitator’s role, but now he really has to accomplish something,” said Mr Park Won-suk, a former lawmaker at the progressive Justice Party. “For the citizens, accomplishment is about the economy, the issues related to their livelihood. The presidential office and the President should focus on those issues.”