SEOUL – South Korean Foreign Minister Kang Kyung-wha has urged North Korea to be more flexible in dealing with the United States, adding that... 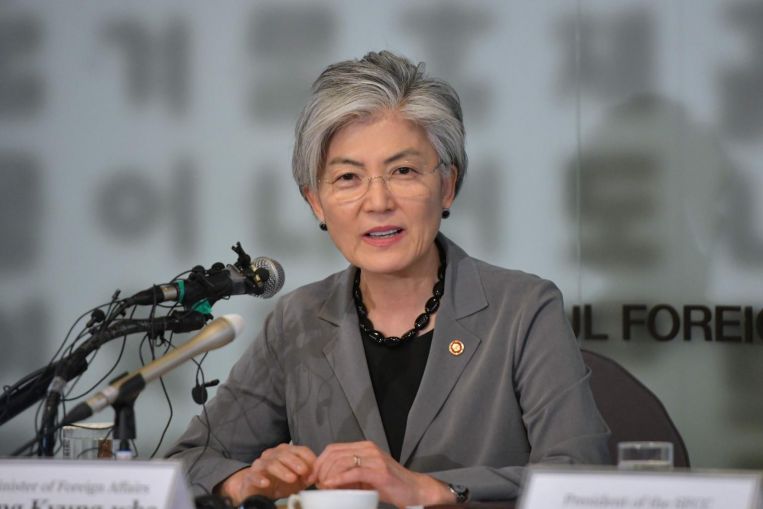 SEOUL – South Korean Foreign Minister Kang Kyung-wha has urged North Korea to be more flexible in dealing with the United States, adding that her country remains optimistic that Pyongyang will “at some point” return to dialogue with the US.

Addressing foreign media in Seoul on Friday (May 3), Ms Kang also said South Korea will continue to support the talks aimed at removing the North’s nuclear arsenal, whether as a mediator, facilitator, or acting from behind the scenes.

“We could wear a different hat depending on the situation,” she said.

Nuclear talks have stalled since North Korean leader Kim Jong Un and US President Donald Trump failed to reach any agreement during their summit held in Hanoi in February. It was their second meeting since they first agreed in Singapore last June to work towards complete denuclearisation.

Both sides have left the option for dialogue open, while taking time to recalibrate their strategies. North Korea’s offer in Hanoi to dismantle its main Yongbyon nuclear facility was deemed insufficient by the US to allow the easing of five major sanctions requested by the North.

Hoping to break the nuclear gridlock, South Korean President Moon Jae-in, who has played the key role of mediator between Mr Kim and Mr Trump, has expressed willingness to meet his North Korean counterpart at any time, in any way. The two Korean leaders met three times last year.

She also stressed the importance of both sides being flexible to reach an agreement. “We need to find common ground to move forward,” she said.

The Foreign Minister also called on the North to adopt a broader and more comprehensive view towards the nuclear issue.

Seemingly stunned by Mr Trump’s decision to walk away in Hanoi, North Korea has ramped up pressure on the US in recent weeks, accusing the country of acting in “bad faith” in Hanoi and warning of “undesired consequences” if there is no change in US stance in nuclear talks.

The regime has also questioned Seoul’s role as mediator in the nuclear talks, while stonewalling requests from the South to meet. A weekly meeting at their joint liaison office has not been held for 10 weeks.

But Ms Kang said South Korea will continue to try to revive dialogue and work towards the end goal of complete deuclearisation of the Korean peninsula.

Sending an envoy to Pyongyang could be a possible next step, she noted.

North Korea could still be “taking stock” of the Hanoi outcome and “calculating their next move”.

“We remain optimistic that at some point they will return to the dialogue,” she added.

In what is deemed a softening of his hawkish stance towards Pyongyang, Mr Abe has offered to meet Mr Kim “unconditionally” and to have frank, open talks with him to resolve a row over North Korea’s abduction of Japanese nationals.

In an interview with Sankei Shimbun on Wednesday, Mr Abe emphasised the importance of Japan being proactive. “We can’t break the mutual distrust between Japan and North Korea unless I directly face Mr Kim,” he said.