A trio of housewives are upset with South Korean President Moon Jae-in. They want him ousted, arguing that he deceived the people with promises... 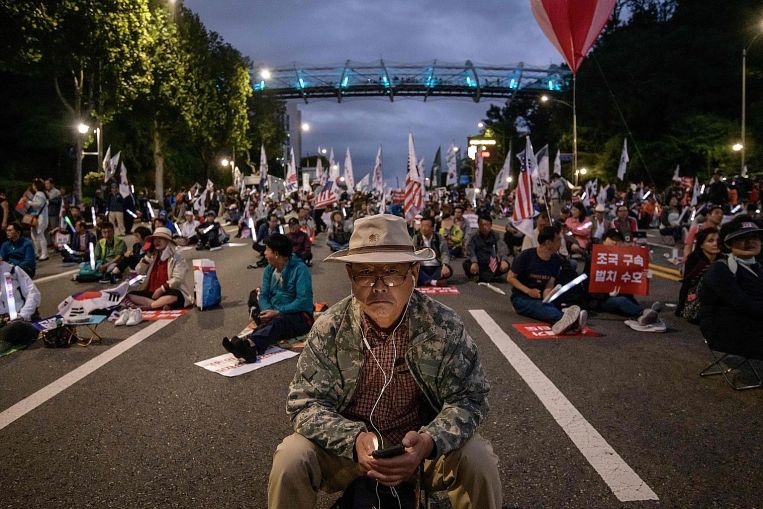 A trio of housewives are upset with South Korean President Moon Jae-in. They want him ousted, arguing that he deceived the people with promises of fairness and justice, but in reality, is condoning the wrongdoings of an unfit justice minister.

Madam Gong Hye-gyeong, together with friends Song Sun-hyo and Lee Jeong-sook, were among the tens of thousands of people at an anti-government rally last Wednesday at Gwanghwamun Plaza, calling for the resignation of both Mr Moon and Justice Minister Cho Kuk.

“The President has failed us and he doesn’t listen to the truth,” Madam Gong, 60, told The Straits Times. She had travelled two hours from her hometown in Suwon city to join the rally in Seoul.

Madam Song, in her mid-50s, chimed in: “I voted for Moon, but we were all deceived by him.”

Three days later, another massive rally of a similar scale was held in front of the Supreme Prosecutors’ Office in Seocho district.

This time, however, it was the supporters of the government and Mr Cho who wanted their voices heard. They called for support for Mr Cho and demanded reforms to the national prosecutors’ office that he promised.

The South Korean public is now divided, split by their political leanings and differing views of the new justice minister.

Mr Cho, 54, was a law professor at the prestigious Seoul National University before being tapped as the senior secretary for civil affairs and justice at the presidential Blue House.

He played an instrumental role in formulating many key policies of the Moon administration, and is viewed as a potential candidate for the next presidential elections.

Experts warn that the protests, if they escalate, could lead to political chaos as the opposition embarks on a campaign to discredit Mr Moon and the ruling party ahead of the general election due next April.

But he is now accused of corruption and abusing powers to gain personal benefits, like faking documents to enrol his daughter in elite schools, and investing his family wealth in a dubious fund.

Mr Moon, however, believes he is innocent and confirmed his appointment on Sept 9, a move that sparked the protests.

The opposing rallies so far have been largely peaceful, with a carnival-like mood as participants held placards and sang out their wishes.

But experts warn that the protests, if they escalate, could lead to political chaos as the opposition embarks on a campaign to discredit Mr Moon and the ruling party ahead of the general election due next April.

Halfway into Mr Moon’s five-year term that started in mid-2017, his approval rating has already halved and fallen to a low of 43 per cent, according to the latest survey by Gallup Korea.

People are unhappy with the weak economy, the lack of progress in ties with North Korea despite the issue being a key policy agenda and diplomatic missteps such as ending a United States-backed pact to share military intelligence with Japan.

Mr Cho’s confirmation was the last straw for many who question the Moon administration’s policies.

Dr Tara O, a fellow from the Institute for Korean-American Studies, foresees that the anti-government protests will grow in scale.

“Moon went too far by pressing for Cho’s appointment. When he came into office, he promised equality, justice and fairness. But nothing about Cho Kuk is equal, fair or just,” she told ST.

The prosecution has launched an investigation into Mr Cho’s family, indicting his wife and raiding their house. His brother is also accused of receiving bribes and transferring his parents’ fortune to his divorced wife via a paper company to evade paying hefty inheritance tax.

Cho supporters, however, insist that the allegations are exaggerated by the opposition and sensationalised by the media. They also believe that he is the right person to reform the prosecution, which many decry as corrupt, abusing its powers, and even colluding with the rich and famous.

Instructor Go Seok-mi, 38, who joined Saturday’s rally supporting Mr Cho, said: “Everything against Cho Kuk is just suspicion. Nothing is proven yet.

“The prosecution is not doing things right, and we, the public, need to correct it.”

Also at the rally were labourer Jeong Yeong-su, 58, and his daughter Yu-jeong, who travelled five hours from the southern port city of Busan.

“I came here to make a cleaner and better world,” said Ms Jeong, 28, a student. “The prosecution must be reformed, and I will come back again if they don’t do it.”

Supporters of Mr Cho believe that the prosecution is trying to bring him down so as to stop him from executing reforms.

Last week, he announced some key reform measures, such as reducing the number of special investigative units and abolishing late-night and prolonged questioning of suspects.

He also promised to ensure that the reforms will not influence the probe into his family, although critics feel that the measures will only benefit his family.

“Cho Kuk is not up to that moral standard,” he said.