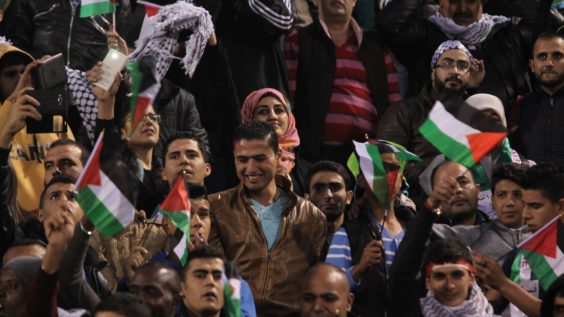 The Palestinian national football team is scheduled to play its Saudi Arabian counterpart at Faisal Al-Husseini International Stadium in the West Bank city of Al-Ram, north of Jerusalem.

Palestinian activists launched the social media campaign against “normalization” with Israel, since the arrival of the Saudi team needs Israeli approval.

Basem Naem, head of Boycott Campaign–Palestine, told The Media Line that the activists “consider the arrival of the Saudi football team to Ramallah as a form of normalization, since such a thing could not happen without the coordination and protection of the Israeli occupation, which we completely reject.”

Naem said the match was part of “Israel’s plan to achieve normalization with Arab states in order to break Israel’s isolation in the Middle East without providing a solution to the Arab-Israeli conflict.”

Israel, he claimed, is “under tremendous pressure to facilitate the movement of Arab delegations into Palestine in return for an opening into Arab capitals, which we condemn and totally don’t accept…. Why else would Israel facilitate the movement of Arab delegations while it carries out crimes against Palestinian athletes and destroys sports infrastructure during its attacks, especially in the Gaza Strip?”

He added that Israel has killed or imprisoned Palestinian athletes, while others “have been deprived of being able to travel to participate in regional and international events.”

Palestinian officials, however, believe the match has political significance, showing world support of the Palestinian people.

Omar Al Jafari, spokesperson for the Palestinian Football Association, told The Media Line that the qualifier “is important in being the first of its kind in which Palestine hosts the Saudi team on its own territory. This has political and moral significance, demonstrating support of the Palestinian people.”

Al Jafari said the Saudi team playing in Palestine “reaffirmed a decision by FIFA, the international governing body of football, and the Asian Federation, that Palestinians should be allowed to play in their own territory” despite various obstacles.

“For years, Palestinians weren’t able to play on our land until FIFA approved of us playing in our home stadium. Following that, football teams started coming to play against us in Palestine,” he said.

Palestinian Authority President Mahmoud Abbas gave his blessing to the football match, having appealed to Saudi Arabia’s King Salman to accept an invitation for the Saudi team to play in Palestine. Abbas said it would “fulfill a Palestinian dream to exercise the right of all teams to play in their national stadiums, at home among fans, as in any other country.”

Hannas Issa, a senior Palestinian official, told The Media Line that the Palestinian Authority (PA) views the match as “a substantial accomplishment” in the eyes of the world.

“It shows that the PA has managed to build strong institutions that have allowed Palestinians to rise to new levels of competitiveness in sports, with a regional and global presence,” Issa said.

He called the upcoming match a “milestone for the Palestinian people on their way toward their ultimate goal of achieving an independent Palestinian state, living side-by-side in peace with the State of Israel.”

While the Palestinian national team was admitted into FIFA in 1998, it took another decade for it to hold its first match, playing against Jordan in 2008.

Kamel Musalem, a Gaza-based organizer of the boycott campaign, told The Media Line he believed the Saudi team’s visit “will harm the Palestinian case because it requires direct and indirect coordination with the Israeli occupation.”

He added that several Gulf states “seem ready to normalize relations with Israel, and we don’t want to give them the space to do so or provide an incubating environment that would help them achieve it.”

Musalem said the boycott campaign was “sending a message to Saudi Arabia that Palestinians appreciate your support of their cause, but this visit will harm it so the match should be canceled.”

He noted that in 2015, the Saudi team “refused to play against its Palestinian counterpart, rejecting any kind of normalization with Israel. What changed that principle this year?”

When reached by The Media Line, the spokesperson for Jibril Rajoub, president of the Palestinian Football Association, refused to comment. Rajoub recently told a press conference that Palestine was preparing for a “historic event by welcoming the Saudi team as part of the World Cup qualifiers.”