BEIJING – Sino-Singapore ties have grown in the past year, and Singapore hopes to sustain this momentum and take the bilateral relationship even further... 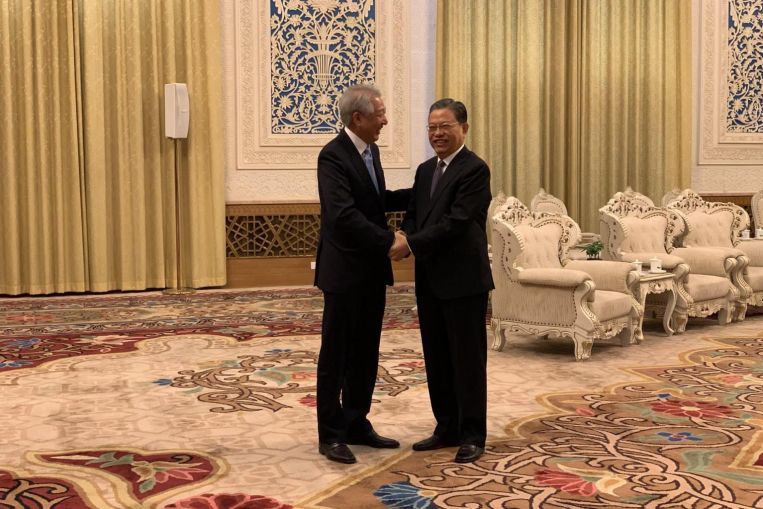 BEIJING – Sino-Singapore ties have grown in the past year, and Singapore hopes to sustain this momentum and take the bilateral relationship even further this year, Deputy Prime Minister Teo Chee Hean said on Thursday (April 11).

Mr Teo, who is in China for a six-day visit, made these comments when he met Chinese leaders in Beijing.

At a meeting with Politburo Standing Committee member Zhao Leji at the Great Hall of the People on Thursday morning, Mr Teo said the bilateral relationship has grown from “strength to strength” in the past year.

He pointed to the flurry of visits from both sides, noting that top Chinese leaders, including Chinese Premier Li Keqiang, have visited Singapore in the past year.

Mr Teo’s own visit is the second in less than three weeks by a top Singapore leader.

Mr Teo said: “I brought with me a delegation – some of them are familiar to you, some of them are new – in order to strengthen our relations between our two sides, and grow friendships with the leadership in China.”

Adding that there would be further visits later this year, Mr Teo said: “These visits provide a very important guidance for the work that our ministers and officials do.”

Ensuring that the bilateral relationship remains strong with successive generations of leaders was one of the objectives of this visit, Mr Teo said at a later meeting with Central Foreign Affairs Commission Office director Yang Jiechi.

He told Mr Yang that he has brought along younger Singapore leaders so they can “understand the depth and the breadth of our relationship and also make new friends”.

Mr Zhao, who is also secretary of the anti-graft Central Commission for Discipline Inspection and China’s sixth-ranked leader, noted that a key part of Mr Teo’s agenda on this trip is to attend the 7th Singapore-China Forum on Leadership, which he will co-chair with Chinese Communist Party (CCP) Central Committee Organisation Department Minister Chen Xi.

He told Mr Teo that the both of them have attended three different sessions of the forum in previous years, and he has always been “deeply impressed” by Mr Teo’s remarks.

The forum is a high-level bilateral exchange between both countries and will be held in Yan’an, Shaanxi province, this year.

He added that China has invited President Halimah Yacob to attend the Asian Civilisation Dialogue in Beijing next month.

On Friday, Mr Teo will travel to Suzhou in Jiangsu province to mark the 25th anniversary of the Suzhou Industrial Park (SIP).

Established in 1994, the SIP was the first government-to-government project between Singapore and China, and has become a hallmark of bilateral cooperation.

On Saturday, Mr Teo will be in Shanghai to attend Singapore Day, which will bring together Singaporeans living in China. He will also meet Shanghai party boss Li Qiang.

He will then travel to Yan’an for the last leg of his visit.

Mr Teo is scheduled to leave China in the early hours of next Tuesday.