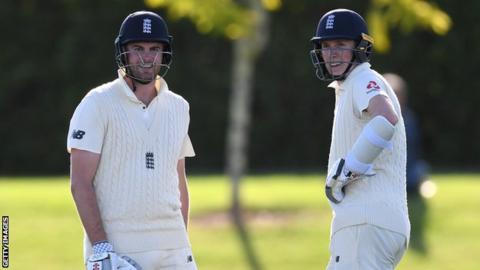 Dom Sibley and Zak Crawley boosted their England Test hopes as they made centuries on the first day of a tour match against a New Zealand XI.

Uncapped Sibley, who opened the batting with Rory Burns, reached three figures from 161 balls before retiring, as England posted 285-3.

Kent’s Crawley, who is also uncapped, compiled 103 from 137 balls batting at three before retiring.

The only wicket to fall during the day was opener Burns, who was dismissed by Henry Shipley for 23.

Captain Joe Root was on 41 at the close, with Ollie Pope also unbeaten on nine.

The two-day tour match will resume at 22:00 GMT on Tuesday at the Cobham Oval in Whangarei.

The start of the match was delayed by three and a half hours by rain, but Sibley and Crawley cashed in when play began.

Sibley, who is widely expected to make his Test debut in Tauranga, was the only batsman to score over 1,000 runs in Division One of the County Championship last season.

“I’m very patient. From a young age I’ve been able to bat for long periods of time, so I stick to that,” Sibley told Test Match Special.

“I understand my game well and know where my areas are.

“Today was a massive positive for me. Hopefully I can build on that and get the call-up.”

Joe Denly opened in the final Test of the English summer but he is expected to drop down to number three, with captain Root at four.

The Kent batsman is recovering from an ankle injury that ruled him out of the T20 series earlier this month, which could lead to Crawley making his debut.

“We had a good day and everyone got a good bit of time at the crease,” Sibley added.

“There were a few nerves – when you have to wait around and stuff it’s a bit frustrating but it was nice to get out there, get through the new ball and then cash in.”

The morning session was lost to rain but England made up for lost time in this 13-a-side practice match.

The team for the first Test seems to be more or less settled in advance, but even so, it was important that Sibley in particular underlined his credentials to open the batting with Burns.

This he did against enthusiastic but not especially challenging bowling that failed to make the most of the green and damp pitch.

Sibley stood tall and worked the ball well to the leg side, while Crawley started patiently and then batted fluently.

He seems unlikely to feature next week but his century at least raises the possibility that, if Denly fails his fitness test it will be Crawley, rather than Jonny Bairstow, who replaces him in the first Test.