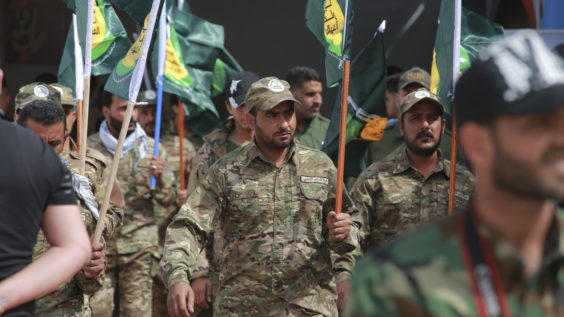 The deputy chairman of the Popular Mobilization Forces (PMF) in Iraq has accused the United States of facilitating the entry of Israeli drones into the country to target their military headquarters.

Jamal Jaafar al Ibrahimi, known as Abu Mahdi al-Muhandis, said in a statement that the PMF has information about American involvement in helping Israeli planes fly into Baghdad.

“We have information, maps and recordings of all types of aircraft. When it took off, when it landed and the number of hours it flew in Iraq,” the statement said.

It added that “any foreign flight over our headquarters without the knowledge of the Iraqi government will be considered a hostile flight,” and the responsibility would be placed on American forces.

Al Ibrahimi accused the American military of flying reconnaissance missions over PMF headquarters, and that Washington had collected information and data about Iranian-backed fighters and their weapons.

Fadel Abu Ragheef, an Iraqi political analyst and security expert, told The Media Line that the PMF has received intelligence reports indicating that Israel is targeting its assets.

“Israel is convinced the forces have ballistic missiles from Iran,” he said. But Abu Ragheef denied the claim, saying it would be “very difficult to transfer and carry these missiles to Iraq, especially considering that the borders are highly secured and monitored by Arab coalition forces.”

He noted that Israel was concerned these arms could be transferred to and used by Iranian-allied mercenaries in Syria, which is why the PMF believes the Israeli military is behind numerous recent attacks.

Emad Awad, a Palestinian defense expert, told The Media Line that Israel has “an interest in attacking Shiite forces in Iraq, seeing them as being representatives of Iran. Israel has established understandings with Russia and the US that it would stay out of Syria, in return for which it has been guaranteed protection in cases of threat.”

Yaakov Amidror, Israel’s former National Security Adviser, told The Media Line that the issue is “why there are even Iranian proxies in Iraq, which is an independent and sovereign state. Is Baghdad trying to become the new Lebanon and be like Hizbullah?”

When asked whether Israel has attacked the PMF in Iraq, Amidror could not offer confirmation but reiterated that “an Iranian proxy shouldn’t be in Iraq. They say they are there to fight ISIS. Is the Islamic State in Baghdad now? No.”

The various units that comprise the Shiite-majority PMF have more than 140,000 fighters. They played an important role in defeating ISIS in Iraq.

The trip raised eyebrows in Washington, which fears growing Iranian influence over Baghdad.