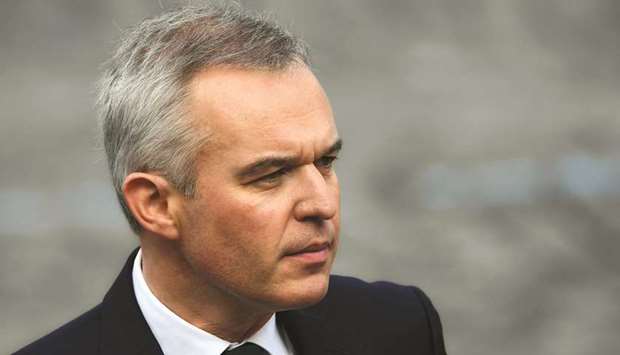 A senior French cabinet minister and close ally of President Emmanuel Macron has resigned following reports accusing him of extravagant state-funded lobster dinners and misusing public housing, in a blow to the centrist government.
Francois de Rugy, who was named environment minister in September 2018, announced his departure after a week of revelations from the left-wing website Mediapart.
“The attacks and media lynching targeting my family force me to take the necessary step back,” said de Rugy, who was number two in the government after Prime Minister Edouard Philippe.
Mediapart has published pictures of de Rugy and his journalist wife enjoying lavish champagne-and-lobster dinners and a Valentine’s Day meal while he was speaker of parliament in 2017 and in 2018.
The website alleged the events – at the expense of taxpayers – were largely social, while de Rugy contends they were part of his work representing the National Assembly.
Mediapart also revealed that de Rugy had benefited from an apartment near his hometown of Nantes in western France that was rented at a preferential rate intended for low-income workers.
Other reports have referred to a €500 hairdryer bought by de Rugy’s wife at public expense, and a renovation of their government apartment at a cost of €63,000 ($70,000).
But the image of a row of plump lobsters on a platter at a function hosted by de Rugy caused the most political damage – and many social media memes – in a country still reeling from months of “yellow vest” protests.
The violent anti-government demonstrations have been fuelled by anger over economic inequality and claims that French leaders are out-of-touch with ordinary people.
De Rugy has denied any wrongdoing and even claimed in an interview last week that he was allergic to lobsters and didn’t like champagne because it gave him a headache.
“He is someone who is solid, courageous,” ruling party MP Olivia Gregoire told reporters after his resignation. “I think he was at the end of his tether.”
She urged people not to judge him on the images and give him the benefit of the doubt.
De Rugy joined Macron early in his successful bid for the presidency in 2017 and was rewarded with a series of plum jobs including parliament speaker and latterly environment minister.
However, the former Green campaigner’s ability to hang on to his job took a blow on Monday evening when Macron failed to give his full backing while on a trip to Serbia.
In his first reaction to the revelations, Macron said he had asked Prime Minister Philippe for “full clarity”.
The departure will draw a line under a series of embarrassing headlines, but will pose a headache for the 41-year-old head of state.
Macron will now have to find his third environment minister in two years, just as he looks to boost his green credentials as French voters demand bolder action to tackle climate change.
Macron’s first appointment to the job, celebrity environmentalist Nicolas Hulot, quit during a live radio interview in August last year, saying that his cabinet colleagues were doing too little to tackle the climate emergency.
Macron and Philippe have both seen their approval ratings rise in recent months following the end of major protests by the “yellow vests”, who caused the biggest crisis of their time in office.
Between 26% and 38% of voters hold a positive view of Macron, according to polls published this month.
Mediapart, which is fiercely critical of the Macron government, specialises in investigations and has caused multiple embarrassments for politicians and senior public figures since its creation in 2008.
De Rugy said he had filed a legal complaint against the publication for defamation, accusing it of a desire “to harm, smear and destroy”.
He is far from the first French politician to be accused of misusing public money.
Right-wing presidential candidate and former prime minister Francois Fillon is being prosecuted after being accused of fraudulently putting his wife on the parliament payroll for two decades.
In 2005, then-economy minister Herve Gaymard resigned after he was found renting an apartment for his family in Paris at a cost of €14,000 a month, while junior minister Christian Blanc billed taxpayers for cigars worth €12,000 in 2010.
Under France’s last president Francois Hollande, a senior adviser had to step down after spending a small fortune to keep his shoes shined.