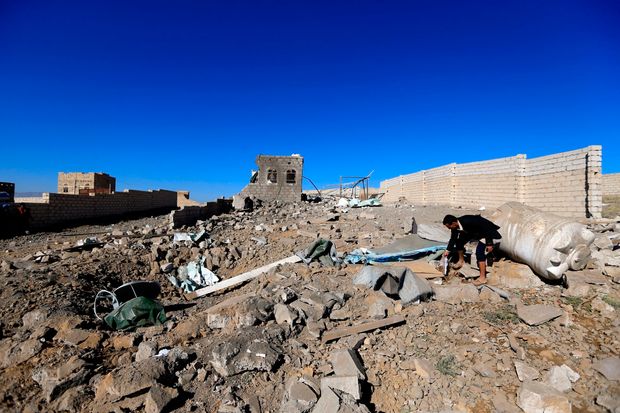 A Yemeni man checks debris of a building destroyed in Saudi-led air strikes.

WASHINGTON—The Senate approved a measure on Wednesday that would end U.S. military assistance for the Saudi-led war in Yemen, reproving the Trump administration for the second time over its support of the kingdom.

The resolution, which now heads to the House, would give President Trump 30 days after its passage to end most U.S. military aid for the war in Yemen, where the Saudi-led coalition is fighting Iran-allied Houthi rebels. The yearslong conflict has killed thousands of civilians and pushed millions to the brink of starvation.

The vote, which passed with the support of all 47 Senate Democrats and seven Republicans, is the latest sign of simmering frustration in Congress with Mr. Trump’s steadfast support for Saudi Arabia.

The killing of Jamal Khashoggi, a U.S. resident and journalist for the Washington Post, at the hands of Saudi agents last year has engendered a growing skepticism of Saudi Arabia on Capitol Hill. U.S. intelligence agencies have concluded that Crown Prince Mohammed bin Salman likely ordered the killing of Mr. Khashoggi.

“This is a direct response to the Khashoggi killing,” said Sen. Chris Murphy (D., Conn.), one of the co-sponsors of the resolution. “By ending our participation in this war we are making a clear statement that we don’t trust this regime any longer.”

The Democratic House last month passed its own version of a War Powers Resolution withdrawing U.S. support for the war, but a Republican amendment to that bill changed its procedural status and prompted the Senate to start over with Wednesday’s vote.

The Senate itself passed a War Powers Resolution curtailing the U.S. role in Yemen in the last Congress, when House Republicans didn’t give it a vote. This version of the legislation is expected to pass in the Democratic-controlled House.

The White House has indicated the president will veto any legislation curtailing the U.S. role in Yemen.

Opponents of the resolution said they recognize problems with Saudi Arabia’s actions in the conflict but cautioned against using the vote as a means to vent their frustration. Senate Majority Leader Mitch McConnell said on the Senate floor Wednesday that the resolution could hinder efforts to reach a diplomatic resolution to the war.

“It is right for senators to have grave concerns over some aspects of Saudi Arabia’s behavior, particularly the murder of Jamal Khashoggi,” Mr. McConnell said. “That is not what this resolution is about. Our focus should be on ending the war in Yemen responsibly. Pulling the plug on support to our partners only undermines the very leverage and influence that we need to help facilitate the U.N.’s diplomatic effort.”

Despite the findings of U.S. intelligence agencies, the Trump administration and Riyadh have maintained that Prince Mohammed wasn’t involved in the death, exasperating lawmakers in both parties.

The White House didn’t meet a deadline to inform Congress about its investigation into the death. A briefing from two Trump administration officials to the Senate Foreign Relations Committee last week only further irked lawmakers, who said the briefing offered no new information about Mr. Khashoggi’s death.

The death of civilians, including children, at the hands of the Saudi-led coalition has also raised questions for lawmakers on Capitol Hill. Former Secretary of Defense Jim Mattis had argued that the U.S. helped to make the Saudi-led bombing runs more accurate and reduce civilian deaths.

Beyond the U.S. assistance with bombing, the U.S. deploys small teams of special-operations forces to support specific military missions, including operations against Islamic State or al Qaeda targets. The Senate resolution allows for U.S. operations targeted at al Qaeda and associated forces in Yemen.