Anti-government protesters stand on barriers set up by Iraqi security forces to close a bridge near the Green Zone Security forces in... 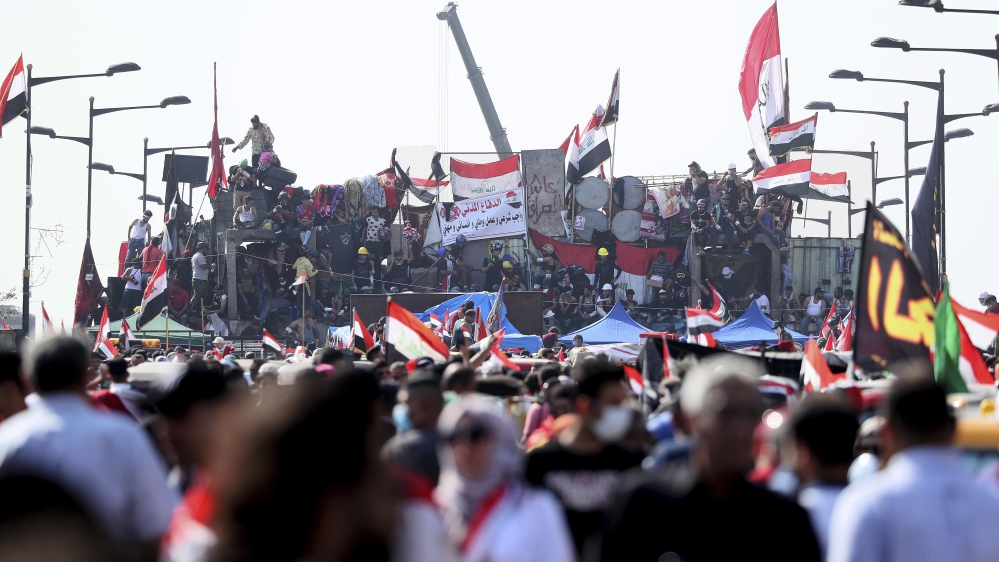 Security forces in Iraq opened fire on protesters in Baghdad, killing and wounding several people, according to news reports.

The Reuters news agency said at least five people were killed in the clashes on Monday.

However, security and medical sources put the toll at one dead and 22 wounded, adding rubber bullets and tear gas, not live ammunition, were used.

The interior ministry could not be immediately reached for comment.

It was the first time live ammunition was reportedly fired at demonstrators in the Iraqi capital since the resumption of protests on October 24, with security forces previously relying on tear gas instead.

Dozens of protesters could be seen running through the streets, some of them carrying wounded people, as gunshots echoed in the background.

Protesters could be seen throwing rocks at security forces, who deployed an armoured vehicle with a water cannon. It was not immediately clear how many protesters were wounded.

AFP news agency said live rounds were fired at protesters amassing near the headquarters of state television in the capital.

Security forces have killed more than 250 people in two waves of protests since early October.

The demonstrations are rooted in long-standing grievances over poor governance, official corruption and lack of economic opportunity, but have since expanded into demands for sweeping changes and an overhaul of the country’s political system, which was established after the US-led invasion in 2003.

Demonstrators have directed their ire at a class of elite leaders whom they accuse of pillaging the oil-rich country’s wealth while the population grows poorer.

Tens of thousands of Iraqis have protested in central Baghdad and across mostly Shia southern Iraq in recent days.