Saudi authorities have detained another dozen activists last week, including a female pregnant activist along with her husband. On social media, Saudi activists have campaigned... 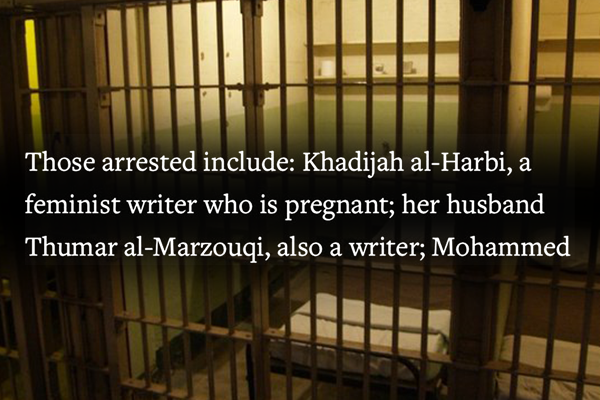 Saudi authorities have detained another dozen activists last week, including a female pregnant activist along with her husband.

On social media, Saudi activists have campaigned in support of the pregnant activist who was arrested while in her late stage of pregnancy.

On hashtag #اعتقال_حامل_بالسعودية [Pregnant woman detained in Saudi Arabia], users tweeted in support of Khadijah al-Harbi, the women rights activist who is pregnant in her last month and was arrested from her house amid fears of facing harsh detention conditions.

Al-Harbi was not arrested alone, her husband Thumar Al-Mazouqi, was arrested as well.

Campaigners demanded the Saudi authorities to immediately release Khadijah describing it as inhuman.

Khadijah and her husband were detained in a wide-scale crackdown on activists carried out last week when authorities arrested eight journalists and activists, among them was Salah Al-Haydar, a son of prominent women rights activist, Aziza Yousuf, who was recently released from prison and the activist, Ayman Aldrees.

The crackdown was described as a new wave of arbitrary detentions” similar to 2018’s one when a dozen of women rights activists were arrested.

Most of them still in detention, despite the international pressure into releasing them.

Reports of torture, sexual harassment, and horrible human rights violations have been reported from detention after the family of Loujain Hathloul, a detained activist, went to media to speak out about her detention conditions.

All detentions are believed to come after activists campaigned for the right to drive and an end to the kingdom’s male guardianship system.

They were reportedly put on their third trial last week after spending almost 10 months without any trials or charges filed against them; three of them have been freed a week earlier yet they attended their trial. Their charges included contacting foreign entities and human rights groups in addition to others related to aiming at harming the Kingdom’s reputation.