Mashael Al-Jaloud’s name has been trending in Saudi Arabia after she decided to challenge social norms and walk in public without wearing an abaya... 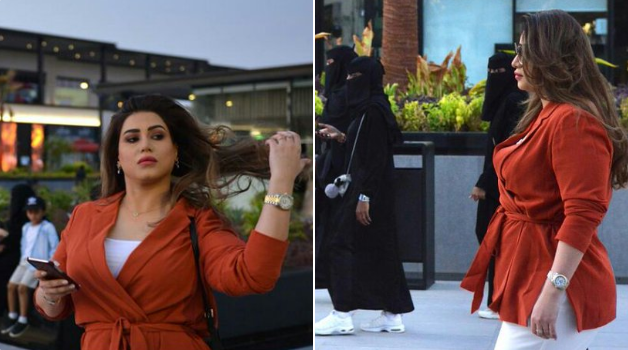 Mashael Al-Jaloud’s name has been trending in Saudi Arabia after she decided to challenge social norms and walk in public without wearing an abaya and headcover in Jeddah streets.

The 33-year-old Saudi woman was spotted by many walking around one of the local malls without wearing what Saudi women had been forced to wear for more than 30 years.

Images and videos of Jaloud have been circulating the internet dividing opinions.

In one video filmed by an international media outlet, Mashael Al-Jaloud appeared walking beside other women wearing traditional clothes before she starts speaking about what seems to be a social experiment to test society’s reactions.

Al-Jaloud goes on to say “there are no clear laws. No clear protection” for women in the Kingdom. She also claimed she “might be at risk for walking in public without wearing an abaya”.

Mashael Al-Jaloud’s step came as part of a movement launched by a number of Saudi women earlier this year to begin a change by defying the rules and social norms. They have been citing the Saudi Crown Prince’s earlier remarks Islam does not demand women to wear a black abaya or a black head cover, as women have been forced to wear for decades in the Kingdom.

Through hashtag #سعوديات_بدون_عباية [Saudi Women Without Abaya], several women have called for social liberalization and amendments in laws that force women to wear abaya and headcover to work.

Al-Jaloud has also claimed she was asked whether she is a celebrity or a model but she responded she is a normal Saudi woman without an abaya.

Opinions is split online. The step was welcomed by many who called for more defiant acts that would allow Saudi women to be free from decades-long social and legal discrimination.

However, some have accused Mashael of violating the social, religious and legal rules. Others have called on authorities to take legal action against her and any Saudi woman who tries to “protect our women and daughters”.

Translation: “This is the Mashael Al-Jaloud who has surpassed the religious and legal boundaries in our country and I urge the public prosecutor to take legal action against her whether she was Saudi or foreigner. I urge you to protect our women and daughters’ morals.”