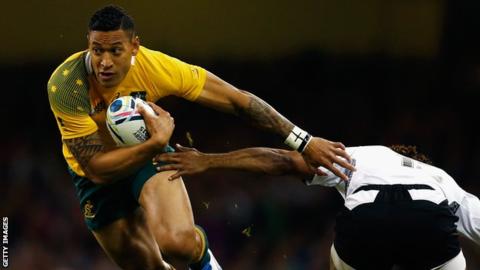 This post was originally published on this site Sacked Australia rugby union international Israel Folau has made a switch back to rugby league with...

Sacked Australia rugby union international Israel Folau has made a switch back to rugby league with a move to Super League club Catalans Dragons.

Folau reached a settlement with Australia Rugby in December after he was released for writing homophobic posts on social media in April.

He was sacked for saying “hell awaits” gay people, after previously being warned over his social media posts.

Folau, 30, has signed a one-year deal with the French club.

The Rugby Football League and Super League said they “deplored” Folau’s previous comments and it was “a difficult decision” to allow him into the competition.

Super League chief executive chairman Robert Elstone said “strict guidelines are in place” to avoid Folau again making such comments and warned that a repeat would see the player’s contract being “terminated immediately”. Catalans also face a “substantial fine” if Folau was to do so.

‘A moral responsibility for the club’

“There is a strong feeling that the decision to sign him lets down many people connected to our sport,” Elstone continued.

“I made Catalans Dragons aware of those views.

“However, Super League does not have the authority to veto the registration of players and is satisfied by the due diligence carried out by The Rugby Football League.”

Keegan Hirst, the first British rugby league player to come out as gay, posted on Twitter that he is “shocked and disappointed” by the deal.

“Our great game is tasked with fighting against homophobia and standing up for the values it puts such high stock in. It shows none of the bravery, camaraderie or integrity RFL expects from its players, staff and fans.”

The RFL said they do not have the “regulatory framework” to stop Folau from joining Catalans and as such could not “prevent his participation in the sport”.

“The player has not been charged or found guilty of any criminal offence,” an RFL statement said.

“The moral responsibility for deciding whether to sign a player sits with individual clubs.

“We have sought and received reassurances from both the player and the club regarding future behaviour.”

Catalans do not ‘condone’ Folau’s comments

Folau said he “acknowledged the views expressed by Super League and the Rugby Football League”.

“I’m a proud Christian, my beliefs are personal, my intention is not to hurt anyone and I will not be making further public comment about them,” he said.

“I look forward to my return to the great game of rugby league with the Catalans Dragons.”

The signing comes after the National Rugby League ruled out Folau’s return to Australia’s top-flight competition.

He had a distinguished career in the NRL with the Melbourne Storm and Brisbane Broncos and earned representative honours as a Queensland State of Origin player and Australia international.

Catalans Dragons chairman Bernard Guasch said they “do not support or agree” with what Folau has previously expressed and “do not share or condone those views”.

But he went on to say they “want to give Israel a new opportunity to shine on the pitch”.

How did Folau get here?

Folau’s return to professional sport comes nine months after he was sacked by Australia.

The former Wallabies star and one of Australia’s highest-paid players, attempted to sue Rugby Australia for A$14m (£7.4m; $9.5m) after having his contract terminated in May, arguing it was a case of religious discrimination.

The row was followed closely down under, as it sparked debate about free speech and discrimination, but it was also a cause of wider controversy in rugby union as athletes both condemned and supported the player.

England international Billy Vunipola was also warned by the Rugby Football Union for his support of Folau.

Folau’s return to the sporting arena sees him go back to the 13-man game he last played a decade ago, with a spell playing Australian rules football followed by his high-profile antics in rugby union.

Catalans Dragons, based in Perpignan in the south of France, are no strangers to making controversial signings, having signed a number of players sacked by Australian clubs, including Greg Bird and Todd Carney.