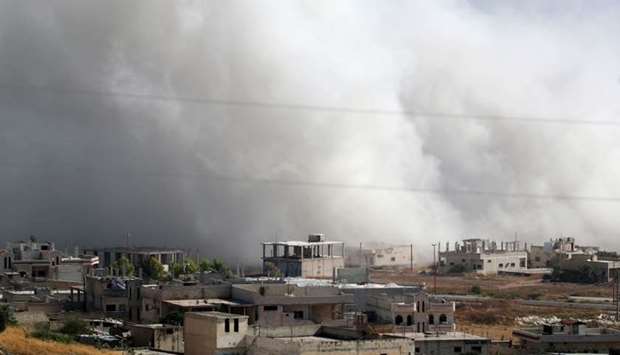 Russian warplanes bombarded a public market in Syria’s north-western province of Idlib, killing 16 people and wounding more than 35, activists and a monitoring group said.
The market is located in the city of Maaret al-Numaan, the Britain-based Syrian Observatory for Human Rights said.
Activists in the area said warplanes carried out several strikes on the public market in the centre of the city. They said black smoke billowed over the city centre and citizens were on the street crying for help.
The death toll is likely to increase as some of those wounded are in a serious condition, while others are still missing or trapped under rubble, the watchdog said.
Since late April, the forces of Syrian President Bashar al-Assad, supported by Russian air power, have been waging a massive campaign against rebels in the provinces of Hama and Idlib, the last major opposition strongholds in the country.
The offensive has so far killed 2,599 people, including 707 civilians, and displaced more than 300,000 people, according to the observatory.