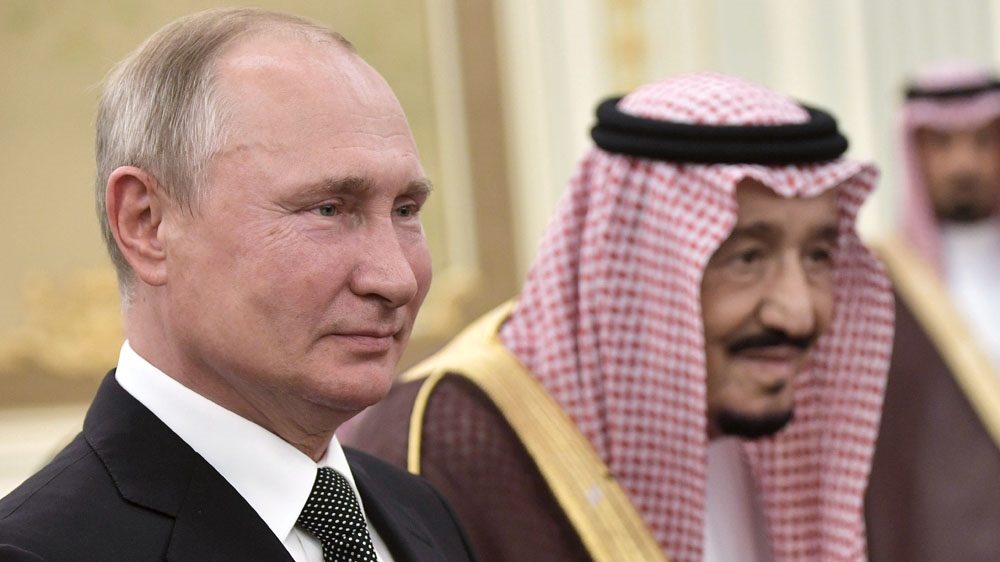 Russian President Vladimir Putin has visited Saudi Arabia in his first trip to the kingdom in over a decade, signing oil agreements and discussing regional security, in particular, Saudi Arabia’s ongoing rivalry with Iran.

A mounted guard escorted Putin’s limousine to King Salman’s Al-Yamamah palace in Riyadh after his arrival on Monday, his first visit since 2007.

At the palace, Putin listened to a Saudi military band play Russia‘s national anthem. He then greeted officials before sitting with King Salman for a conversation captured by state television.

The meeting signified strengthening relations between the two countries, who have worked together in recent years to keep oil supplies low, and thus keep prices high, but have been on opposite sides of regional conflicts.

Moscow has supported President Bashar al-Assad in the Syrian civil war, while Riyadh backed groups which fought for his overthrow.

Russia has also strengthened ties in recent years with Iran, which is locked in a decades-old contest with Saudi Arabia for influence in the wider Middle East.

In recent months, tensions between the two sides have soared and veered towards open conflict. Putin has previously said he could play a positive role in easing tensions between Tehran and Riyadh, given Russia’s strong ties with both sides.

In a statement broadcast during the visit, Putin praised King Salman’s efforts at maintaining relations.

In brief remarks, the 83-year-old King Salman said, “We look forward to working with Russia to achieve security and stability and fight terrorism.”

Prince Abdulaziz bin Salman, the country’s assistant oil minister, then lead a signing ceremony for 20 agreements between the two nations, most memoranda of understanding in the fields of energy, petrochemicals, transport and artificial intelligence.

The Saudi Press Agency (SPA) said the two leaders discussed developments in Syria, where Turkey recently launched a cross-border offensive, and the ongoing civil war in Yemen, where a Saudi-led coalition has been fighting Houthi rebels since 2015.

“A substantial exchange of opinions took place, on regional problems, on situation at the energy markets, or on oil prices, to keep it simple,” he told reporters in Riyadh.

Putin previously offered to provide Russian defence systems to Saudi Arabia after the September 14 attacks on its state-owned oil facilities.

While Yemen-based Houthi rebels claimed the attacks, Riyadh and several Western powers, have said Iran is to blame. Tehran has denied the allegation. The attack halved Riyadh’s output of crude oil.

Any movement in a defence system deal would likely cause disquiet in Washington, which is sending 3,000 troops and additional air defence systems to Saudi Arabia following the attacks.

Asked about concerns Riyadh was cosying up to Moscow at the expense of relations with the United States, senior foreign ministry official Adel al-Jubeir said he saw no contradiction.