7:17 PM ET GREEN BAY, Wis. — The calmness in Matt LaFleur’s voice and the smile on Aaron Rodgers‘ face was all that was... 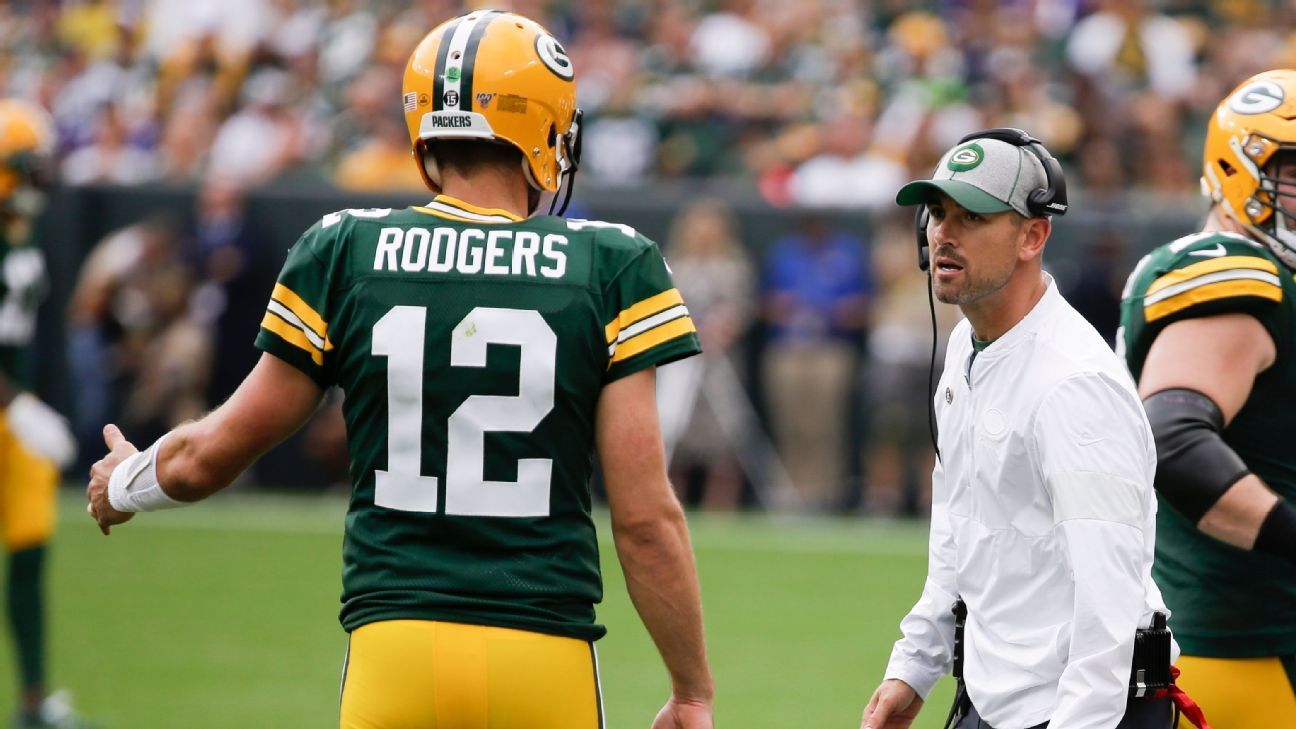 GREEN BAY, Wis. — The calmness in Matt LaFleur’s voice and the smile on Aaron Rodgers‘ face was all that was left of the first animated sideline interaction between the Green Bay Packers‘ new head coach and the veteran quarterback in Sunday’s 21-16 win over the Minnesota Vikings.

The exchange occurred when Rodgers came off the field following the final possession of the first half, a three-and-out that ended with a Rodgers throwaway on third-and-16.

“It was about the look on defense,” Rodgers said. “I was actually kind of surprised that he was coming over to talk about that, but we got it all sorted out over there on the sideline. It actually wasn’t a big deal. … We’re a little animated at times. I can’t say we were yelling how much we love each other, but we definitely weren’t MF-ing each other or anything. It was talking about the look there and getting on the same page.”

“It’s different,” he said, noting that interim coach Joe Philbin did it a couple of times last year in the final four games after Mike McCarthy was fired.

“It’s definitely helpful, when he’s bouncing stuff off — ‘Do you like this? Do you like that? Do you want to start with this? You want to get to this?'” Rodgers added. “Obviously I did that with Mike a bunch, I’d kind of go to over where he was at, but Matt likes to get cozy on the bench.”

Neither Rodgers nor LaFleur were surprised or seemed annoyed by the line of questioning — a sign they had already moved on from the exchange.

“That’s just two competitive guys, and I’m sure it’s not going to be the last one we have,” LaFleur said. “But you know, just competitors, heat of the moment and it is what it is. I would much rather have that than anything else because you want guys that are extreme competitors and that’s what he is.”

A week after the Packers’ new offense managed just 213 yards — 31st in the NFL in Week 1 — in the 10-3 win at Chicago, Rodgers led touchdown drives on the first three possessions to stake the Packers to a 21-0 lead on Sunday.

For the first time in his NFL career, Rodgers wore a play-calling cheat sheet on his wrist to try to help speed up the offensive tempo.

“This is probably the wordiest offense I’ve been in since Cal,” Rodgers said. “At Cal, we would signal from the sideline and if there was ever a play that needed more than seven signals, we’d wristband that one. I think it just helps with the communication, so he doesn’t have to say 12 syllables to me and then I say 12 syllables in the huddle. It helped speed things up a little bit. But we didn’t use it a whole lot. We only used it probably five or six times.”

Still, the offense sputtered after the opening three drives. The Packers totaled 171 yards on those three scoring drives and then just 164 total net yards on their final 11 possessions.

A fumble by Geronimo Allison and a mistake by Rodgers on what he thought was a first down but instead was a fourth-and-1 ended drives in Vikings territory.

“I think they made some adjustments and we did as well,” said Rodgers, who completed 22 of 34 passes for 209 yards and two touchdowns. “We just didn’t execute. We had some chances at some stuff. I think they just tightened up. They made some good plays on contested balls. We had three or four opportunities for a contested catch and they made plays on the ball, which would have been big plays. Marquez [Valdes-Scantling] had one where he kind of got carried out of bounds. Davante [Adams] had one on their sideline. [Aaron Jones], I underthrew that one. But those plays, not converting them hurt. And then obviously we were driving there and then G-Mo trying to get some extra yards kind of took away some points there. And then my bonehead play took away some points as well.”