Israelis are set to vote in Israel’s Knesset elections on Tuesday 17 September, 2019, to elect the 120 members of the 22nd Knesset. Billboards of... 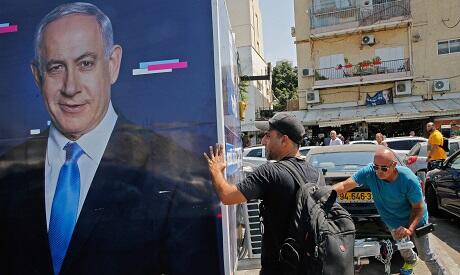 Israelis are set to vote in Israel’s Knesset elections on Tuesday 17 September, 2019, to elect the 120 members of the 22nd Knesset. Billboards of the election campaigns have been rife in different Israeli cities.

The elections follow prior polls that took place last April when incumbent Prime Minister Benjamin Netanyahu failed to form a governing coalition. This is the first such failure in Israel’s history after 1948.

Opinion polls suggest the electoral race shows a near dead heat, exclusively between Netanyahu’s Likud party and Benny Gantz-Yair Lapid’s center-left Blue-White Coalition. Both of these contenders won 32 seats in the April elections.

Meanwhile, and surprisingly billboards went up among Arab communities and towns in the northern city of Galilee urging voters to boycott the polls. These were written in Arabic.

The billboards were anonymous and did not identify its funders; at first they were thought to be put up by Arabs. However, an Israeli Channel 12 investigation broadcast during the week found the billboard campaign was commissioned, financed and sponsored by a right-wing Jewish groups who to suppress the Arab voter turnout elections day. In trying to investigate the people behind the billboards, the investigation discovered those who produced the billboards had all worked with anonymous clients whose accents and comments indicated they were Jews.

This comes at a time when the Palestinian citizens of Israel are already torn between those who are urging to boycott the elections and those want them to vote. The boycotters to vote would be to legitimize the government that has approved the Nation-State law discriminating against citizens of Palestinian origin and other minorities. On the other hand, many youths are urging their community to step up and have a say in the ballots to fight the current Israeli government, stand up for their rights, and help improve their presence in the political map of Israel.

The billboards’ photos were shared on the internet alongside other billboards that were put up in April and still can be seen in Israel of Netanyahu giving the middle finger to passersby in banners put up by the opposition party, Yashar.

Other billboards of Netanyahu alongside the Indian, Russian and US leaders were placed on the Likud Party’s headquarters in Tel Aviv.

The three controversial billboards showed Netanyahu shaking hands with India’s leader Narendra Modi, another showed him with the US President Donald Trump while the third of him with the Russian President Vladimir Putin. The last believed to be targeting the Russian citizens of Israel.