Rhys Hoskins trolls Mets, and the other coolest things from last night

In the top of the ninth of a lopsided game Tuesday, Mets right-hander Jacob Rhame threw behind Phillies first baseman Rhys Hoskins, earning the... 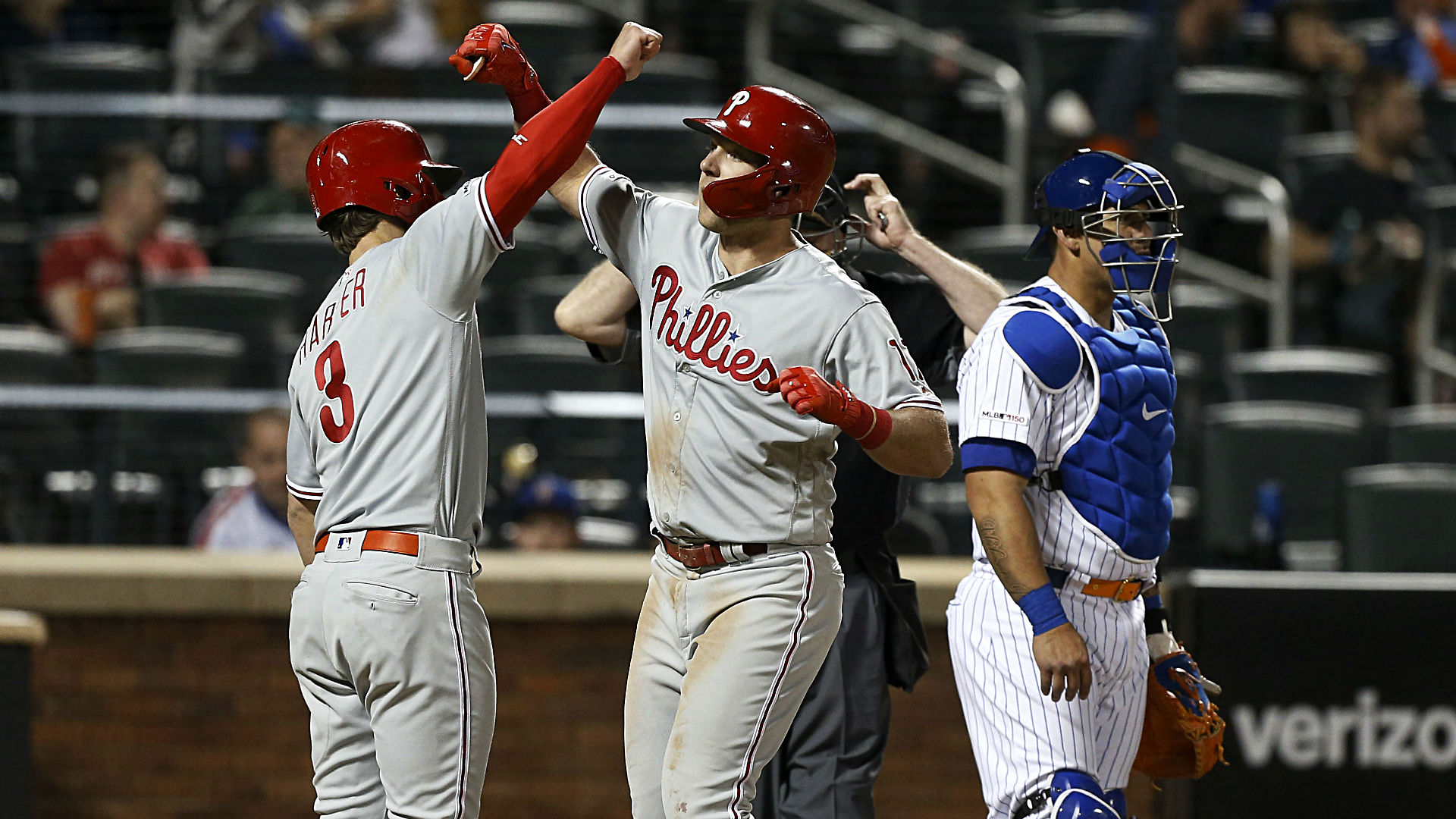 In the top of the ninth of a lopsided game Tuesday, Mets right-hander Jacob Rhame threw behind Phillies first baseman Rhys Hoskins, earning the ire of the Philadelphia clubhouse.

Hoskins and manager Gabe Kapler believed there was purpose in the errant pitch.

Hoskins earned another crack at Rhame in the ninth inning Wednesday with the Phillies leading 4-0. He drilled a two-run home run just inside the left-field foul pole, then rounded the bases at a deliberate pace, taking a seasonlong 34.2 seconds to cross the plate.

That was by far the coolest moment in baseball Wednesday night. Here is the full list of things we enjoyed, including the vengeful long ball:

5. Security guard takes foul ball to head like a champ

A’s first baseman Mark Canha ranged near the Rangers’ dugout Wednesday to try to snag a ball in foul territory, but he was unable to pull it in.

Instead, the ball doinked off a security guard’s head and bounced high up into the air.

He handled it well, even though it likely hurt pretty bad. He got to watch Oakland deliver a walkoff hit in the next frame, which hopefully eased the pain.

4. Matt Chapman does his best to get noticed in crowded MVP field

Until Mike Trout’s hair starts to gray, he will be a leading candidate to win the AL MVP. He’s the best all-around player of his generation and perhaps on track to become the greatest player of all time, period.

Yet, in the past two seasons, the honor belonged to Jose Altuve and Mookie Betts, and there’s a chance it will once again elude Trout. In 2019, A’s third baseman Matt Chapman could conceivably best the Angels superstar behind his stellar defensive work at the hot corner and budding offensive game.

Chapman missed significant time last season to injury but still finished third in the AL in WAR, according to Baseball Reference. He hit .278 with 24 home runs in 145 games, though it was his effort in the field that separated him from most other position players.

So far this year, he has taken another step forward, boasting a .311/.407/.633 slash line. He blasted an opposite-field home run – his eighth of the year – in a victory over the Rangers on Wednesday.

If Chapman keeps this up, he’ll at least be in the conversation for MVP.

The Cubs have turned around their play of late, but they have not really had a signature moment to symbolize their change in fortunes.

Baez provided one Wednesday with a majestic three-run game-tying shot against the Dodgers. Everything he does on the field comes with such flair.

Moments later, outfielder Jason Heyward drilled another three-run home run to give the Cubs a 6-3 lead. They would hold on to win 7-6.

The Blue Jays finally are promoting their top prospect to the major leagues after a prolonged service time-related wait.

Guerrero, son of Hall of Famer Vladimir Guerrero, is expected to immediately be one of Toronto’s best hitters. He hit 20 home runs in 95 minor league games last year.

With Guerrero in tow, the middling Blue Jays will go from one of the least interesting teams in the AL to must-watch TV.

This moment could not have been set up any better for Hoskins to get back at the pitcher who threw behind him the day before, and he made sure to take full advantage of it.

This was the slowest home run trot of the MLB season.

Rhys Hoskins’ home run trot of 34.23 seconds was the longest in MLB this season and the first over 30 seconds. His previous longest trot was 28.88 seconds.