Reclusive Singapore billionaire's gloss is too good for Dulux to refuse

Underscoring the stretched nature of the offer’s valuation of Dulux there are – unlike the 2017 $US11.3 billion ($15.8 billion) acquisition of Valspar by...

Underscoring the stretched nature of the offer’s valuation of Dulux there are – unlike the 2017 $US11.3 billion ($15.8 billion) acquisition of Valspar by Sherwin-Williams that formed the world’s largest paints group – no meaningful in-market synergies from a Nippon acquisition of Dulux. Nippon has no existing operations in Australasia.

That signals that Nippon recognises the management excellence that has seen Dulux deliver what its advisers at Macquarie believe is the third-best total shareholder return of any company in the S&P/ASX100 since its 2010 listing and also sees an opportunity to greatly accelerate what had been a cautious exploration by Dulux of its potential to expand offshore.

Nippon, the world’s fourth-largest paint and coatings business, plans to retain the current management, led by Patrick Houlihan, while using its own extensive distribution network to fast-track Dulux’s expansion.

As the largest paint supplier in China, Nippon apparently believes there is considerable potential to create value by distributing Dulux’s Selleys range of adhesives and sealants throughout the Greater China region.

The takeover will be effected through a scheme of arrangement, with the Dulux board having already entered into a scheme implementation deed.

While it isn’t completely out of the question that another offer might emerge, given that there is global consolidation of the sector occurring, the price-tag required would be a powerful deterrent.

The reclusive Goh began in the paint business in 1949 when he bought war surplus stock that the British were auctioning.

The Valspar acquisition was executed on a then-record enterprise-to EBITDA multiple of 15 but most transactions in the sector have been on multiples in the 10 to 12 times EBITDA range.

While Nippon’s pricing is very full, the Dutch group Azco Nobel which (as a result of its 2008 takeover of Orica’s former parent, Imperial Chemicals Industries) owns the Dulux brand outside Australasia, would presumably at least take a look at the proposed offer and its terms.

Azco Nobel has itself been on the receiving end of a takeover – it fought off US paints giant PPG Industries’ $US30 billion bid in 2017 – while it unsuccessfully pursued a merger of its own with Axalta later that same year.

There has, therefore, been a flurry of large-scale mergers and acquisitions activity and consolidation-motivated transactions in the sector in the past few years to provide a backdrop for Nippon’s interest in Dulux. 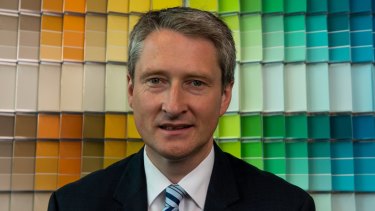 Nippon Paint wants Dulux CEO Patrick Houlihan and his team to use its global presence to accelerate the expansion of the Australasian business.Credit:Jesse Marlow

Nippon is an unusual Japanese company and, therefore, while there might be the same motivation that has led to other big and high-priced acquisitions by Japanese companies in this market – an ageing demographic and consequently a lack of growth in its home market – there is a somewhat more entrepreneurial tinge to its interest in Dulux.

Nippon Paint is 39 per cent-owned by Singaporean billionaire Goh Cheng Liang, with whom it has a joint venture, Nipsea, which distributes Nippon-manufactured paints and coating throughout Asia.

The reclusive Goh, who forced an overhaul of the Nippon board last year in response to Nippon’s failed $US9.5 billion for Axalta Coating Systems in the US (he wanted Nippon to concentrate on extending its dominance in China) began in the paint business in 1949 when he bought war surplus stock that the British were auctioning. Subsequently he began making his own products.

In the mid-1950s, having approached Nippon asking for help to grow his fledgling business, he began distributing its products in Singapore. Today his paint and property empire has made him one of the richest men in Singapore.

Dulux, and its Selleys range in particular, fits within Goh’s desire for Nippon to capitalise on its leading position in China.

While there are adhesives and sealants available in China and the region, they tend to be trade-focused rather than directed at consumers. With Nippon’s existing distribution network, the potential to grow Selleys into a powerhouse consumer brand in the region is obvious.

Apart from its presence throughout Asia, Nippon also has operations in the UK (where Dulux has also been cautiously testing the market for its speciality paints) Europe, Russia, the US, Brazil and the Middle East.

Nippon doesn’t plan to make changes to Dulux’s existing businesses or its leadership, instead saying that the acquisition would provide an increased opportunity for Dulux to pursue its growth ambitions by leveraging Nippon’s global scale and resources.

Stephen is one of Australia’s most respected business journalists. He was most recently co-founder and associate editor of the Business Spectator website and an associate editor and senior columnist at The Australian.