Along the way, they must grapple with questions of nationality, culture, attitude and even different Arabic dialects in a rollercoaster laugh riot that raises... 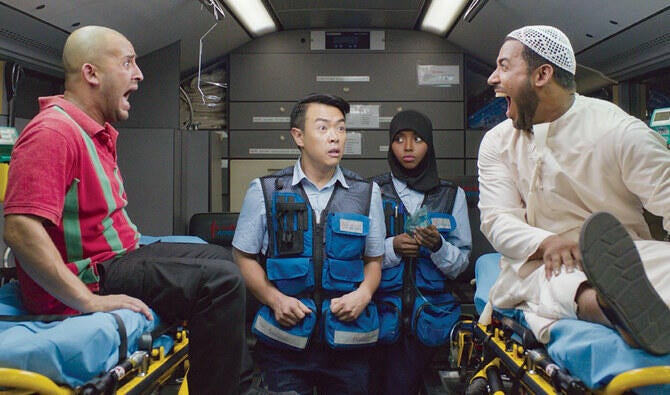 Along the way, they must grapple with questions of nationality, culture, attitude and even different Arabic dialects in a rollercoaster laugh riot that raises questions about whether the other half really lives a better life.

“The grass often appears greener on the other side, but that isn’t always the case, and (it’s important) to appreciate yourself and your surroundings, whatever they may be,” said producer Ali F. Mostafa. “But there’s also equality and solidarity in different cultures. These two people switch souls and experience each other’s lives, but at the end of the day are so close in what they truly want.”

Mostafa, familiar for his directorial work on “City of Life” and “The Worthy,” assumes co-production responsibilities on the project, along with fellow Emirati director Majid Al-Ansari (“Zinzana”) and Rami Yasin (“Syriana”).

The trio stepped in to help with technical issues, or whenever Harib needed a sounding board on what is his first live-action feature.

Harib is better known for his work in animation, particularly with the acclaimed TV series “Freej.” He recasts that signature effervescence into a slapstick sitcom approach for “Rashid & Rajab.” He said: “There’s a common thread between all my creations: I’m either very cartoonish or very poetic, and this film kind of tends to my cartoonish side, so perhaps my spirit is the common denominator between ‘Freej’ and this film.” Body-swap films are a well-worn genre, but Harib has a knack for understanding regional audiences, which serves this production well.

Combined with the feel-good script and dialogue gags, that could help box-office performance when the film is released in other markets.

Previous Emirati films have struggled to make it in countries such as Egypt, despite pan-Arab approaches and popular themes.

“We’ve been trying to release Emirati films in Egypt for a while now, and for some reason, they don’t do well, even films that we felt had an international appeal,” Mostafa said.

But with “Rashid & Rajab,” Harib taps into a style of comedy that is completely right for the region.

And with half the film set in a very Egyptian tone, and the other half with a Khaleeji speaking in an Egyptian accent, that could really appeal to an Egyptian audience.

The film was shot on location in Dubai, and could soon be screened worldwide thanks to a global sales agreement with the agent AGC International.

Harib is prepared for criticism, having encountered it with “Freej,” where sections of the audience felt he was not being faithful to tradition.

“It’s amazing how many people want to pick on stuff,” he said. “I was like, ‘Why don’t you go make your own cartoon? You know, showcase our culture in your way.’ That’s my angle. There’s no right or wrong.”

• This report is part of a series being published by Arab News as a partner of the Middle East Exchange, which was launched by the Mohammed bin Rashid Al Maktoum Global Initiatives and the Bill and Melinda Gates Foundation to reflect the vision of the UAE prime minister and ruler of Dubai to explore the possibility of changing the status of the Arab region.