Qatar Stock Exchange (QSE) has partnered with the Ooredoo Ride of Champions to launch the QSE Corporate Challenge, to promote healthy living within the... 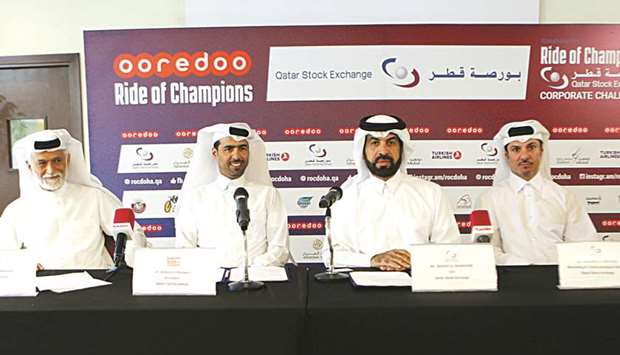 Qatar Stock Exchange (QSE) has partnered with the Ooredoo Ride of Champions to launch the QSE Corporate Challenge, to promote healthy living within the community, as part of its corporate social responsibility.
The Ooredoo Ride of Champions is the biggest mass-participation cycling event in Qatar and the pinnacle of the community events organised by Qatar Cyclists, as it offers rides that suits all ages and experience levels.
More than 1,500 participants are expected to take part in this year’s event which will be hosted by Qatar Foundation on March 15, 2019.
This partnership agreement is the first of its kind in Qatar and will see QSE offering prizes to its most active companies during the Ride of Champions.
The QSE Corporate Challenge Health Champion Award will be presented to the entity that encourages the most members of its staff and their families to participate in the event at any distance, whether it be kids, family ride (on closed roads in QF), or open road short (48km), medium (78km) and long (137.5km) events.
While, the QSE Corporate Challenge Speed Champions Award will be presented to the company which has the fastest adult team, which will be calculated by determining the QSE listed company with the fastest average speed for its four fastest riders over any of the open road distances (48km), medium (78km) and long (137.5km) events.
“At QSE, we are not only committed to the financial health of our listed companies, but also to their social and physical health. This year we will only open the challenge for listed companies, but we are planning to extend this in the future and open the challenge to all companies in Qatar,” said its chief executive Rashid bin Ali al-Mansoori.
Dr Abulazziz al-Kuwari, president of Qatar Cyclists, said the QSE’s unique initiative will help promote cycling among the employees of their listed-companies. “It’s a partnership that will lead to great results in the future,” he added.
QSE is setting an example to all companies in Qatar on how to use community events to promote sports and active lifestyles, according to Ali (M) al-Kuwari, managing director Ooredoo Ride of Champions.
Other official partners and supporters of the Ride of Champions include Alfardan Group, Dolphin Energy, Qatar National Tourism Council, Turkish Airlines, Ministry of Culture and Sports, Qatar Cycling Federation, Garmin Lingawi and Rayyan Water.