By Mudassir Raja A select gathering paid tribute to successful Qatari women in recognition of their contributions in different walks of life. In a... 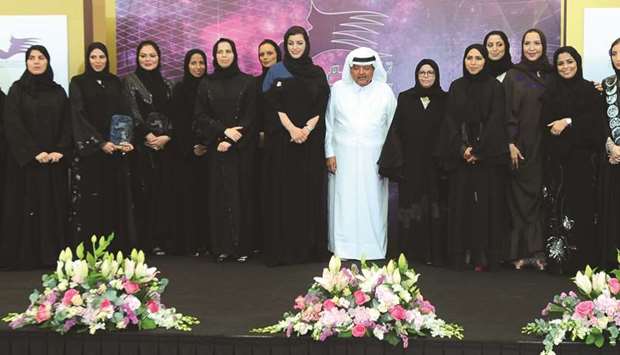 A select gathering paid tribute to successful Qatari women in recognition of their contributions in different walks of life.
In a glittering award ceremony held at the Al Wadi MGallery Hotel in Msheireb Downtown on Sunday night, Qatari Businesswomen Association (QBWA) announced the winners of QBWA Takreem Awards 2019. The gala award ceremony was held under the patronage of and in presence of HE Sheikh Faisal bin Qassim al-Thani.

QBWA Takreem Awards aim to recognise and celebrate Qatari women who have contributed to Qatar’s economy and society through their significant achievements in different fields. The nominations were made by the esteemed judges and the winners were selected after a long and thorough consideration.

The event was hosted by Khalifa al-Haroon, of I Love Qatar, who supported the ceremony as the official media partner.
Speaking at the start of the event, Aisha Hussain Alfardan, QBWA Vice Chairwoman, said: “Tonight, we want to talk about the achievements and to identify potentials, talents and competencies. This is the real purpose of the Takreem Awards, through which we will have the opportunity to recognise these leading women so as to inspire younger generation to thrive and reach their full potential.”

Speaking after the ceremony, Sheikh Faisal bin Qassim al-Thani stressed on the importance of the role of women in building the society as mothers and educators for their families and as working women who contribute through their works in different fields. He also emphasised the availability of opportunities in Qatar and encouraged young women to move forward confidently. He noted that the number of female graduates from the universities exceeds the number of males in Qatar. He also asked the women to participate in different conferences to benefit from the available opportunities.

The association honoured HE Shaikha al-Mahmoud, former Education Minister, for her outstanding lifetime achievements. HE Dr Hessa al-Jaber, former Minister of Communications and Information Technology, was awarded for outstanding career achievements and initiatives that contributed to inspire future generations in Qatar.

Aisha al-Tamimi, a well-known cheff, was given an award for her distinguished career and achievements in the field of hospitality. Najla al-Shafie was honoured in recognition of her achievements as a female influencer and Dr Ghada Darwish Karbon for her outstanding achievements in legal work, law and arbitration.

Samah al-Sada earned the award for her career and achievements in engineering, and Bouthayna al-Muftah was awarded in recognition of her distinguished career achievements in the field of arts.

Talking to Community, Lolwah Alkhater said that she was very happy to receive the award. Such kinds of awards are always encouraging for the women striving in different walks of life, she said.

Kummam al-Maadeed, an English language novelist, talking to Community, said: “I write fantasy novels in English. I have two novels published so far. The Lost Rose is my first novel. The name of the second novel is Calling Magic. Now, I am working on my third book which will be a comic. I conduct workshops on literary writings.

“There are lots of opportunities and support for women in Qatar. Women are actually proving themselves worthy of all the opportunities. They are very strong and dedicated.”

About the awards, she said: “No matter if you’re a woman or a man, recognition of your work is always good. You are happy to see people realise that you have done some good work. I have been following the QBWA awards regularly.”